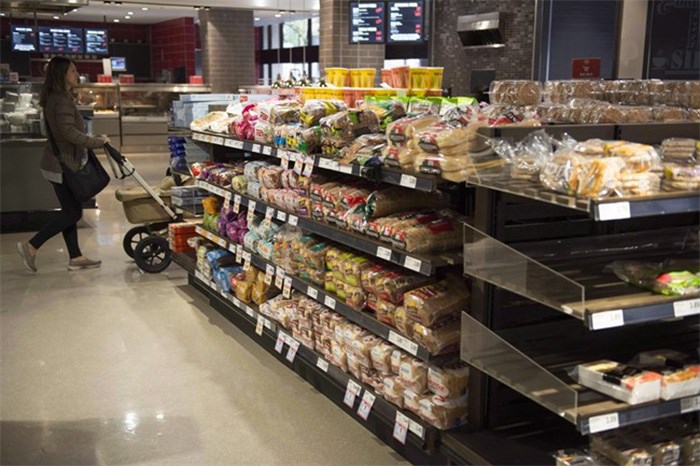 Various brands of bread sit on shelves in a grocery store in Toronto on Wednesday Nov. 1, 2017. THE CANADIAN PRESS/Doug Ives

The recently revealed 14-year industry-wide arrangement to co-ordinate bread prices in Canada doesn't seem to shock experts, who say price fixing is a common and tempting practice in the country.

Any possible reward, they add, appears to outweigh the risks of penalties and losing consumers' trust.

Grocery giant Loblaw Companies Ltd. (TSX:L) and George Weston Ltd. (TSX:WN) revealed earlier this week they participated in a co-ordinated bread pricing scheme from late 2001 to March 2015. The companies tipped off the Competition Bureau and struck an immunity deal to avoid criminal charges or other penalties from the ensuing investigation.

According to court documents, the regulator is also investigating the alleged involvement of Canada Bread, Walmart, Sobeys (TSX:EMP.A), Metro (TSX:MRU) and Giant Tiger as well as "other persons known and unknown."

Details about the investigation are sparse and no criminal charges have been laid. Many of the companies say they do not suspect their companies or employees broke laws, and that they are fully co-operating.

"Price-fixing cases are actually quite common," said Jim Brander, a professor at the University of British Columbia's Sauder School of Business in Vancouver.

For grocery stores, which have small margins, a seemingly small jump in price for a product can provide big gains, he added.

Between 2001 and 2015, the consumer price index for bread, rolls and buns rose 96 per cent jump, according to Statistics Canada. During that same time frame, CPI for all food purchased from stores increased about 45 per cent.

Historically, fines were quite small compared to the gains companies could make, said Brander, so the penalties were not a major deterrent.

Penalties for conspiracy — the umbrella under which price-fixing falls — include fines up to $25 million and imprisonment for up to 14 years, or both. That's up from a previous $10 million and five years.

In recent history, the competition watchdog pressed criminal charges, which were eventually stayed, against several parties in a price-fixing arrangement in the country's chocolate industry. It also charged and fined a number of individuals and companies involved in a Quebec gasoline price-fixing cartel.

However, it's difficult to be caught and prosecuted, said Fred Lazar, an associate economics professor at York University's Schulich School of Business in Toronto. After all, Canada's major grocers allegedly managed to do this for nearly 15 years, he said.

"What's required for the Competition Bureau to have a case is a smoking gun," he said. "Some type of memo, some letter, something on a computer that basically states, 'Yes, you know, my competitor and I are co-operating and we're increasing prices.'"

Without that, it's difficult for the bureau to prove collusion, he said.

There are many people at an organization, such as those whose salary is tied to the financial performance of the business, who have incentive to improve profits and engage in price fixing, Brander said.

These individuals may meet each other at industry events, like a conference, he said, or it could be as simple as picking up the phone and dialling the number of someone at a competitor.

The Competition Bureau published excerpts from some conversations it intercepted during its Quebec gasoline price-fixing investigation. These include lines as direct as: "OK, I'll let you call your people and I'll call mine, and then at 10 o'clock at 95.4 cents."

The retailers facing the recent bread allegations likely chose to manipulate bread prices rather than another product due to the small number of companies involved, said Lazar.

Canada has few major bread wholesalers, including George Weston's bakery division as well as Canada Bread and only a handful of national grocery chains.

"If you had 10, 20 of these suppliers serving all these major supermarket chains than it's much less likely there would have been any form of collusion," said Lazar.

It's unlikely a similar scheme is happening in the price of other products, he said, as there aren't many other areas with a limited number of suppliers, including one owned by the parent company of a grocery titan like Loblaw.

George Weston and Loblaw have said they are confident there is no similar arrangement for any of their other products.

It's also unlikely companies implicated in the arrangement will lose customers, Brander said, as these headlines fade from consumers' memories quickly.

The way the companies are handling the news may even enhance people's trust, he said. Loblaw and George Weston say they informed the bureau immediately after discovering the information, and Loblaw is offering eligible shoppers a $25 gift card as a goodwill gesture.

"I would not place loss of consumer trust very high on the list of major, major concerns coming out of this case," he said.