Relocating tributaries for pipeline ‘a recipe for disaster’: streamkeeper 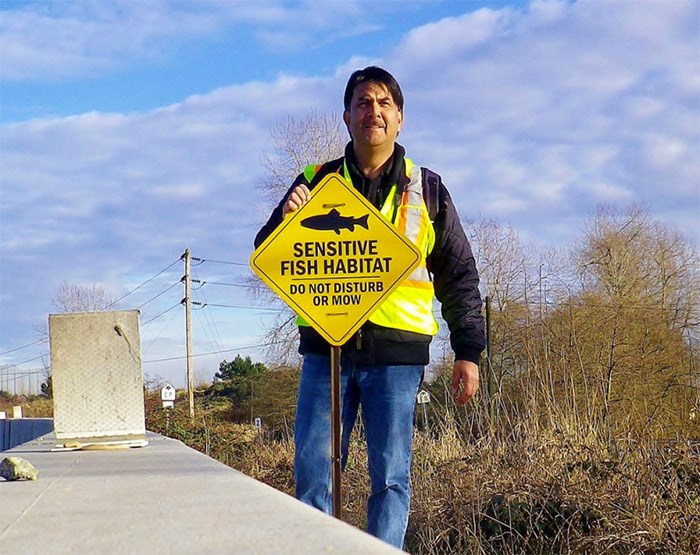 Burnaby streamkeeper John Preissl says Burnaby Mountain has experienced heavy water flows, and if Kinder Morgan proceeds to move the Silver Creek and Eagle Creek tributaries into new culverts this spring, it could harm the fish population at the bottom of the mountain. Photograph CONTRIBUTED

A local streamkeeper is warning against the dangers of relocating creeks on Burnaby Mountain this spring.

As part of its $7.4-billion Trans Mountain expansion project, Kinder Morgan plans to move Silver Creek and Eagle Creek tributaries into new culverts. (The tributaries are currently culverted for some or all of their length through the Burnaby terminal.)

Work is scheduled to start no earlier than April, according to Lexa Hobenshield, Kinder Morgan Canada’s external relations manager. But Burnaby resident John Preissl is calling it “a recipe for disaster.”

“It’s really bad at that time,” he said. “It should be done in the summer months (August and September) when there’s less chance of sedimentation and silt flowing downstream into the salmon habitat itself. Basically, when there’s no flow in the creek.”

Should the skies open up during construction, Preissl said there will be runoff from where crews are working, which can negatively impact the fish at the bottom of the mountain.

“Not crying wolf here. It happened all last year. Everybody was caught off (guard) by the water flows, and we had so many (environmental monitor) failures, I’ve lost count,” he said. “(Sediment) smothers the eggs before they even hatch. If they do hatch, (with) the lack of oxygen, they usually don’t last long.”

The streamkeeper said he has no faith in Kinder Morgan’s ability to ensure sediment doesn’t flow into the creeks.

He pointed to spring 2016, when he noticed muddy sentiment spilling into Eagle Creek as a result of construction at the Burnaby tank farm. At the time, Kinder Morgan said it had inspected the work site and observed no issues with sedimentation.

According to Hobenshield, regardless of the timing, Kinder Morgan will abide by its water management plan and erosion and sediment control plan.

“We will also have environmental monitoring during construction and reclamation of inlet and outlet areas right after the diversion to minimize risk of soil erosion,” she wrote in an email.

“Other mitigation measures include pre-construction environmental resource protection; the prevention of construction-related materials or debris from entering watercourses and; the installation of erosion and sediment control measures to prevent surface water from entering natural drainage systems, watercourses or wetlands.”

That’s not good enough for Preissl.

“It got to a point last year, this last winter, that we had so many serious washouts in all the creeks, mainly Silver Creek and Stoney Creek, I was pre-warning the department of fisheries and oceans, the city and the developers, that this was going to happen, and it did happen,” he said.