Richmond asks for extension of landfill operations in ALR

The City of Richmond has appealed a decision by the Agricultural Land Commission denying EcoWaste a longer term on its landfill.
Mar 17, 2021 3:52 PM By: Maria Rantanen 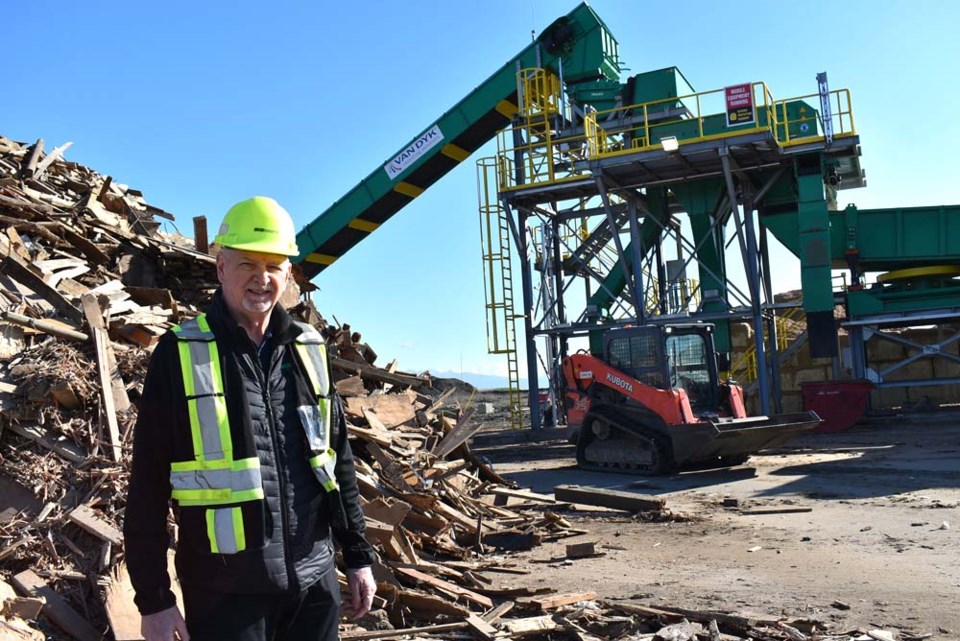 Tom Land, president of EcoWaste, is hoping to increase recycling at the east Richmond landfill from 30 per cent to 80 per cent.Maria Rantanen/Richmond News

The reaction from Richmond’s mayor to this suggestion from a commission tasked with protecting farmland was it was “ridiculous” while the landowner thinks the ALC is just being “pragmatic.”

Richmond Mayor Malcolm Brodie said the city’s aim is to keep land in the ALR, that should be what the ALC wants to do and that’s what EcoWaste originally planned to do with their property located west of No. 8 Road along Blundell.

“What are they doing suggesting they should take it out? What kind of an ALC are they?” Brodie said.

EcoWaste has been filling their landfill site with construction demolition waste for decades — with a non-farm use permit from the ALC — and they recently asked the ALC, supported by Richmond council, if they could extend their permit by 20 years to 2055.

Richmond council supported EcoWaste’s application with the understanding the land would then be remediated for agricultural use.

The ALC allowed an expansion of the non-farm use — so more recycling activities could take place — but denied allowing the extra 20 years.

Currently, about 30 per cent of material coming through the gate is recycled, but their goal is to bring this to 80 per cent, said EcoWaste's president Tom Land.

EcoWaste’s current permit is to fill 18 metres above sea level, and he thinks they will achieve that, with current operations, within five years, given the intensification of demolition and construction in the region.

Pivoting, however, to new types of operations — with an investment of about $50 million — would increase the usefulness as a landfill with intensified recycling to 2055.

But the investment isn’t worth it if they can’t extend the time on their permit, he added.

This led to the ALC’s suggestion that EcoWaste apply to have it removed from the ALR.

“I think they look at it from a pragmatic perspective and (say) it’s a landfill, it’s not farmland,” Land said. “The community might actually get better value out of … having it ultimately… more as an industrial resource than a probably substandard agricultural resource.”

The ALC told Land the legislation had changed and it wasn’t possible to extend the permit by another 20 years.

The city, at the direction of Richmond council, has now appealed the ALC rejection of the non-farm use extension, sending a letter in early March.

The city argued neither the maximum height of the landfill nor the type of material being brought onto the site would change.

Furthermore, encouraging the landowner to ask for exclusion is “directly contrary to the purposes of the Commission,” which is to preserve the ALR, encourage farming in the ALR and encourage local governments to “enable and accommodate farm use of land” within the ALR.

The city also pointed out there are large ALR land holdings in the surrounding area owned by corporations and if the EcoWaste site were excluded, it would “create immediate pressure for these other sites to pursue exclusion.”

The Port of Vancouver bought 230 acres in the ALR in 2008, which they currently lease out for farming.

The port’s activities, however, aren’t curtailed by the provincial ALR Act.

The city’s letter further claims there are “significant environmental benefits associated with the increased recycling capacity at the facility.”

From Land’s perspective, the ALC sees “the land for what it is,” an industrial fill site.

“I think their view is it’s never going to be super good farmland just because of the fact it’s gone through all this filling process,” Land said.

Even if the EcoWaste landfill is removed from the ALR, it is still zoned “agriculture” by the city and can still be turned into farmland, he added.

And Land said they have a plan to turn the property back to farmland, including drainage, irrigation and soil remediation to create a growing medium.

He added EcoWaste’s property is different from the active farmland the Port of Vancouver bought, which it is holding for future industrial use, although it’s currently being farmed.

“It rankles me to think of taking good farmland - productive, active farmland - and creating an industrial environment out of it,” Land said. “It’s a different story to take something that really is industrial, for all intents and purposes, and then try and impose agricultural.”

Richmond seniors and fixed income earners are most affected by the 5.68 percent property tax hike, survey finds
Mar 17, 2021 9:00 AM