This B.C. paper ran an ad for 'pictures with Satan' instead of Santa (VIDEO) 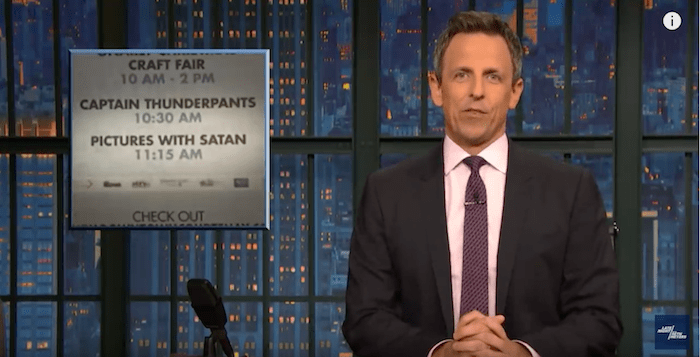 The ad, which ran in the Comox Valley Record's Nov. 21 edition, features the Comox Valley Christmas Parade at 2 p.m. on Dec. 1 in large writing. On the right side, the ad shows a few events that will take place in the Native Sons Hall. The first is the "Gnarly Christmas Fair" from 10 a.m. to 2 p.m., followed by "Captain Thunderpants" at 10:30 a.m. Last, but certainly not least, is the in-famous copy for "Pictures with Satan" at 11:15 a.m.

Since running the ad, the typo has generated international attention. Late-night heavyweight Seth Meyers featured the ad on his show, Late Night with Seth Meyers, where he explained on how a, "Newspaper in Canada ran a Christmas ad this week and misspelled Santa's name as Satan."

The funnyman quipped, "Weird. The same thing happened to me at Starbucks, where my cup said Kellyanne Conway."

The Comox Valley Record responded to public attention with a piece entitled "Editorial: Ad lacked attention to detail" on Nov. 22. The publication took full responsibility for the mistake, noting that, "There is no excuse for it, and we aren’t about to use this space to make any."

After owning up to its blunder, however, the publication mused on its near misses.

"We often chuckle about the typos we have caught, breathing sighs of relief when the L in “public” or the B in “Hornby” is added by the last set of eyes before going to print. Even those are not always caught," read the editorial.

The New York Post also weighed in on the error, writing, "It’s the typo from hell."

Have a look at Seth Meyers' sarcastic take on his Nov. 27 show.