Architect hopes to squeeze 21 homes onto ONE single-family lot

This proposal for stacked townhouses on Granville Street hopes to squeeze 21 homes on a single-family lot.
V.I.A. Mar 6, 2018 1:36 PM 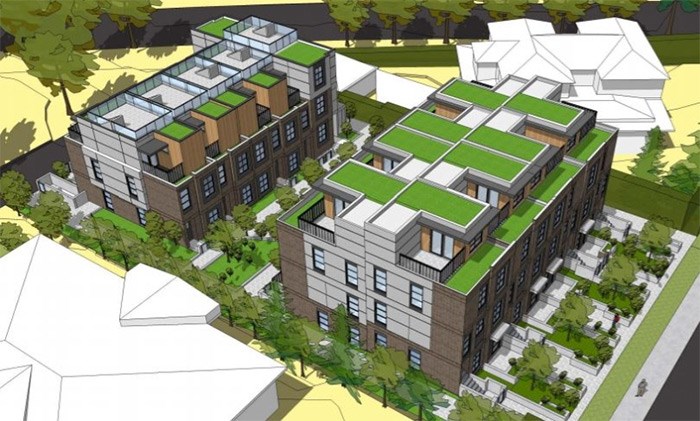 This proposal for stacked townhouses on Granville Street hopes to squeeze 21 homes on a single-family lot. Image: Stuart Howard Architects via City of Vancouver planning

Some single-family lots in Shaughnessy are so huge, you could fit 21 homes on them – if you stack them just right.

That’s the plan in a new rezoning application for a 17,502-square-foot lot in the toney neighbourhood, which aims to build 21 regular and "stacked" townhouses in a 3.5-storey building on Granville Street at Connaught Drive. The homes would be 100 per cent secured market rental.

The application is being considered under the City of Vancouver’s Affordable Housing Choices Interim Rezoning Policy, which gives special consideration to a development that is within 100 metres of an arterial road and is either 100 per cent rental, or offers below-market pricing, or shows innovation in housing form or tenure model. 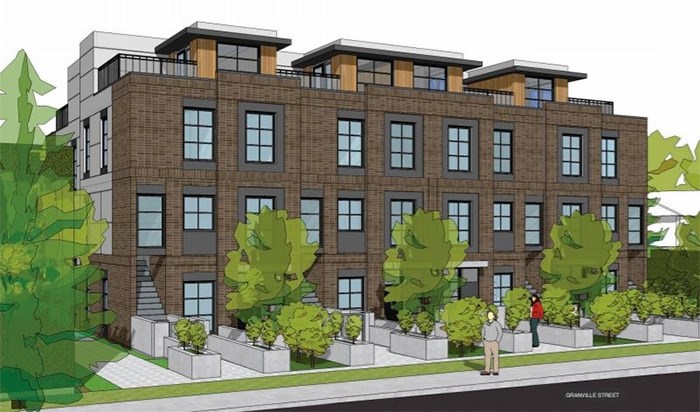 The street-facing townhouses in this proposal have master suites on the roof, which access roof terraces. Image: Stuart Howard Architects via City of Vancouver planning

The proposed design by Stuart Howard Architects is for 21 homes in two buildings. The smaller building at the back would comprise five conventional three-storey, three-bedroom townhomes, each with large roof terraces. The larger building fronting Granville Street would comprise eight one-bedroom, ground-floor units, plus eight two-and-a-half-storey, three-bedroom townhouses above each. (The half-storey refers to a master suite on top of the building, each accessing a smaller roof terrace.) That comes to a total of 44 bedrooms on one single-family lot. The proposal also includes 32 parking spaces and 32 bicycle spaces.

However, as the proposal fulfills the "innovative housing form" criteria of the City's Affordable Housing Choices policy, the townhomes are not also required to be below market price – and this is still prime Shaughnessy.

A community open house will be held from 5pm to 8pm on Thursday, April 19, 2018 at the Shaughnessy Heights United Church, 1550 West 33rd Avenue, Vancouver.