Swastika being removed from roof of South Vancouver building

Efforts to remove a large swastika emblazoned on the roof of a small industrial building in South Vancouver have finally begun.
Vancouver Courier May 3, 2019 11:39 PM 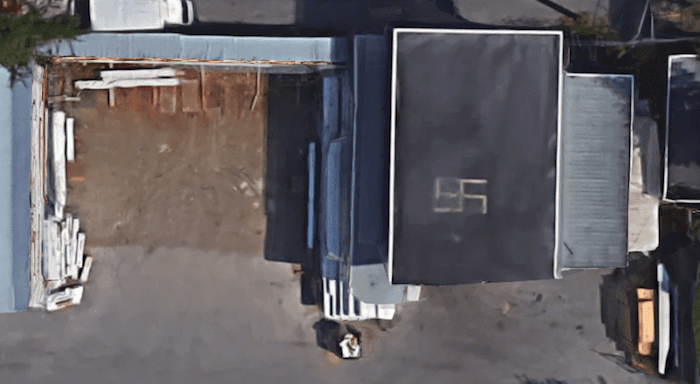 Efforts to remove a large swastika emblazoned on the roof of a small industrial building in South Vancouver have finally begun after the Courier made inquiries about its origins.

But nobody seems to know how it got there in the first place, or how many years it went untouched.

Last week, the Courier was alerted to a white swastika, roughly equivalent in size to a small car, painted on the roof of a building at 8211 Argyle St., south of Marine Drive and just east of the Knight Street Bridge.

The swastika could not be seen from the street but remains clearly visible on the aerial view of Google Maps.

Northern Building Supply Ltd., whose main office and operation is a few blocks away, owns and uses the property in question. (MH Flooring is misidentified on Google Maps as being located at the site despite actually operating out of the building immediately north of the property. The company says it has previously requested Google to fix the error without success.)

When the Courier asked the property owners about the Nazi symbol, they seemed confused.

Gord Thomas, one of the owners of Northern Building Supply, said he thought an employee had dealt with it years ago.

“We got graffitied, or whatever, and the City called and said, ‘There's something on that roof,’” Thomas said. “Then we went up there — 'Holy sh**.' So, we just painted it over.”

But when the Courier checked on the morning of May 2, the swastika was still there.

After the Courier informed Northern Building Supply that the symbol was still visible, Thomas told the newspaper later that day that they had immediately begun to paint over the symbol. While it remains visible, Thomas said additional coats will be put on to fully cover it up.

The Courier contacted the City of Vancouver about the swastika May 2.

When asked when the City first learned about the swastika, and why staff hadn’t followed up to ensure it had been removed, the City said it couldn’t provide answers to those questions: “We have no record of this in our current database. Prior to October 2016 data was captured in our previous permit management system, which is no longer operational. Pulling information for those years would mean going through it manually and would require significant staff time; going beyond the scope of a media request.”

But Thomas still insists they had removed it years earlier.

“It was painted over before. It must have washed off or something,” he said. “I can't understand that. I know 100 per cent we did it.”

While Thomas believed the symbol was “long gone,” neighbouring businesses seemed to know all about it.

Evan Orion, creative director at Koncept Event Design, which operates out of a building directly north of 8211 Argyle St., said they heard about it as soon as they moved into the neighbourhood three years ago.

Another neighbouring business owner named Thomas, who declined to give his last name, said he told Northern Building Supply employees that the symbol should be removed back in 2017.

“I went down to Northern Building Supply when I was buying some supplies for my shop, and I talked to the staff there. I said, 'Hey, there's this thing on top of the roof, it's a swastika. I don't think that's appropriate,’” Thomas told theCourier.

Thomas said some of the staff “seemed to be aware of it” and a few staff members “had a little chuckle” when he raised the issue.

“I said, 'I don't think that's appropriate. It should be removed,’” explained Thomas. “They said, 'No, that's just what it is.' And that's kind of where it stayed.”

Gord Thomas, one of the owners of Northern Building Supply, seemed unaware of that interaction and questioned whether it even happened.

The Courier took this photo of the Swastika symbol on May 2, 2019. Photo Dan Toulgoet

By dark coincidence, removal of the Nazi emblem began on the day of Yom Ha’Shoah, otherwise known as Holocaust Remembrance Day.

Vancouver Green Party Coun. Pete Fry highlighted that point when contacted by the Courier for comment.

“The irony of us having this conversation on the day that we commemorate the Holocaust — it’s a reminder that this is not an uncommon thing in the City of Vancouver, and that there's always that sort of simmering underbelly of racial intolerance,” Fry said.

“We're obliged as a society to make a statement, take a stand, and not tolerate that kind of behaviour and intimidation.”

Rabbi Dan Moskovitz of Vancouver’s Temple Sholom echoed that sentiment, saying that this should again be a moment to remember the horrific legacy the swastika now holds.

“That symbol means something, and we need to remember what it means,” Moskovitz said May 2. He spoke to the Courier just moments after participating in a Holocaust memorial event at the B.C. legislature.

“Canadian forces died to remove not only that symbol but its message of hatred and intolerance and racial superiority from the face of the earth,” he said.

“So, not only should Jews be horrified by it, but all Canadians should [be]. Our troops died to make sure that symbol did not fly over this country or [get] painted on rooftops in Vancouver.”

When the Courier later informed Moskovitz that the building owners had begun removing the swastika, once alerted to it by this newspaper, he was relieved.

“They should be commended,” said Moskovitz. “They did the right thing.”