‘That was our goal’: VPD glad for extra attention on controversial distraction theft billboard

For the Vancouver Police Department there’s no such thing as bad publicity when it comes to distraction thefts.

Last week the VPD announced an awareness campaign devoted to keeping the public wary of distraction scams or thefts. Whether carried out by using sleight of hand to switch real jewelry with fakes or pawning off fake gold for some quick cash, the VPD says these thefts are difficult to investigate as the victim only realizes there's been a crime well after the suspect has left.

To help educate people the VPD, along with the Vancouver Police Foundation and the Metro Vancouver Crime Stoppers, placed 19 billboards around the city, in four languages (English, Chinese, Punjabi and Tagalog), to help warn people about the crimes.

Soon after the billboards were unveiled, many took issue with the way the English version of the sign was written: “Be cautious of strangers getting close or asking for help.”

Some wrote the message portrayed a dystopian society or taught the reader to fear all others. Vancouver city councillor Christine Boyle offered an alternative message for the billboard: “Be kind to strangers. Help others and ask for help. We're safer and stronger together.” Boyle later tweeted the billboards “miss the mark” and said she hoped they would be taken down.

“Be thoughtful and aware of your surroundings, of course. But also be compassionate and helpful. We are all safer when we care for and about one another,” Boyle wrote.

While the billboards weren’t taken down, one set back from the intersection of Expo Boulevard and Pat Quinn Way was hit heavily with graffiti last weekend.

With a can of black and white spray paint, the vandal edited the text to read “Be cautious of strangers police getting close or asking for trying to ‘help’.”

The billboard was replaced with a Tagalog version of the sign on Monday. 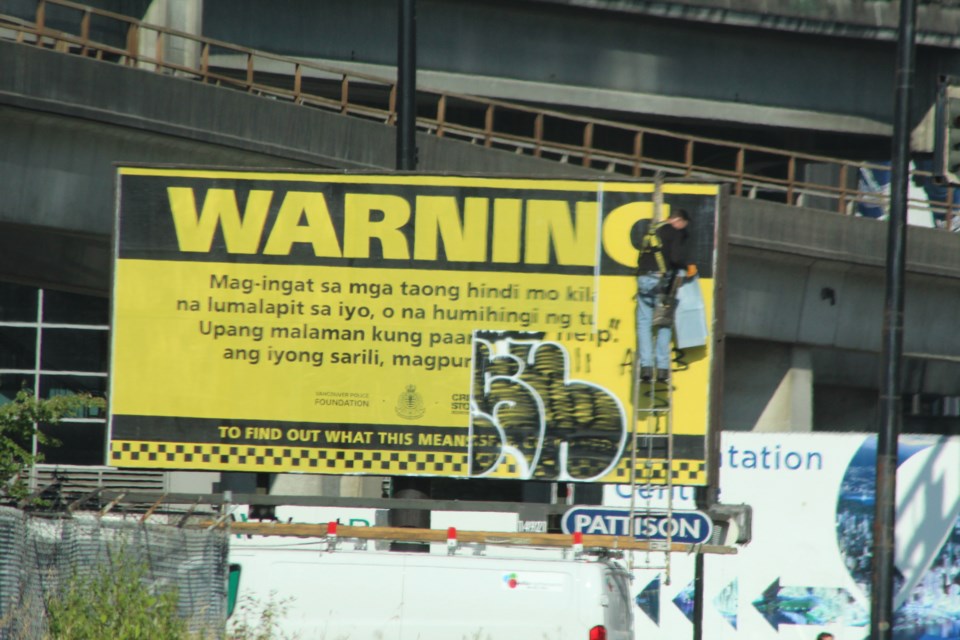 The vandalized billboard was replaced with a Tagalog version on Monday. By Brendan Kergin

The graffiti, combined with the billboard’s labelling as controversial in recent media coverage seems to have played into the VPD’s hands in a way.

Tania Visintin, VPD explained the billboard campaign is an effort to draw attention to the ongoing distraction thefts in the city, the added coverage has done just that.

“During my short time of a year and a half in public affairs, we have put out numerous news releases warning the public about this awful crime that typically targets the senior population. However, distraction thefts have been going on for years in Vancouver,” Visintin said.

“We are happy that these billboards are getting attention and creating discussion. That was our goal. We want people to see these eye-catching signs, discuss the meaning and talk to the elderly in the community. We want the conversation to continue.”

“Anecdotally, by this topic staying in the media, we hope this will bring down the occurrences and the scammers will stay away,” Visintin said.

Vancouver police investigating 13 incidents of mischief and vandalism at local churches
Jul 22, 2021 9:11 AM