Canadian Prime Minister Justin Trudeau participates in a discussion with LGBTQ rights advocates in the Commonwealth, who are part of the Commonwealth Equality Network, while in London, Thursday, April 19, 2018.
Apr 19, 2018 10:51 AM By: The Canadian Press 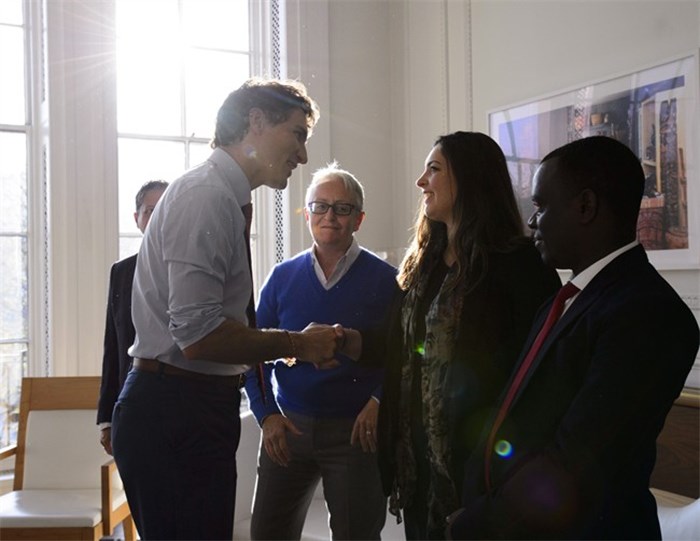 Prime Minister Justin Trudeau was expected to add his voice Thursday to those calling for less plastic in the world's oceans and more LGBTQ rights around the globe as he ends a three-country foreign tour at a gathering of Commonwealth leaders in Britain's capital.

But Trudeau could face resistance on the latter — particularly from some African countries that have been forcefully pushing back against the U.K., Canada and other champions of gender and sexual equality.

The Commonwealth summit represents a rare opportunity for Canada's prime minister to meet and hear from 52 counterparts from six continents, most of whom share some type of link to the old British Empire.

The institution has suffered over the years from relatively low engagement by its main member, Britain. There have been hopes for renewal as Brexit looms on the horizon and the U.K. looks for new partnerships to replace the EU.

"As we leave the European Union, our relationships with Commonwealth countries become even more important than they were," British High Commissioner to Canada Susan le Jeune d'Allegeershecque said in an interview.

"And we are looking at a certain rebalancing in our international engagement, and that will include more focus on countries of the Commonwealth."

The Commonwealth itself, however, has suffered from Britain's own disinterest, as well as questions of relevance given that many of its members — particularly from Africa and parts of Asia — have worrisome records on democracy and human rights.

That includes LGBTQ rights, which Canada and the U.K. have been pressing as a priority for the organization against significant opposition from many Commonwealth members, a majority of whom still outlaw same-sex activities.

Despite that opposition, which saw LGBTQ rights kept off the official summit agenda, Trudeau met Thursday with Commonwealth gay-rights activists at the Canadian High Commission to reassure them of his continued support.

"The LGBT issue is one of the most outstanding issues that demonstrates maybe the Commonwealth isn't as good at bringing people together around shared values and principles as we should be," he said.

"I'm very much looking forward to hearing from all of you on how I can continue to be an ally, what would be most impactful for me to be challenging and exhorting and nudging and encouraging the leaders to move forward."

In an interview after the meeting, the activists, who are all members of the Commonwealth Equality Network, welcomed Trudeau's continued work but lamented the continued opposition voiced by other leaders.

"I can't even get close to my prime minister or my president," said Rosanna Flamer-Caldera, executive director of Sri Lanka's Equal Ground rights group and co-chair of the Commonwealth Equality Network.

"So we need to use international platforms with help from leaders like Prime Minister Trudeau."

Trudeau was also expected Thursday to support British Prime Minister Theresa May's call for Commonwealth members to curb the use of plastics as she looks at banning plastic straws, cotton swabs and other single-use items.

Such products have been under fire in the U.K. since the airing of a stunning BBC documentary that included a detailed look at the impact of plastics on the world's oceans.

Canada has made reducing the use of plastic to protect the oceans a G7 priority and moved to ban plastic microbeads in bath and body products, and Environment Minister Catherine McKenna's office said it plans to go further.

"By working with provinces and territories, and in consultation with Indigenous Peoples, industry, municipalities, non-profit organizations and research institutions," McKenna's office said in a statement, "the government of Canada will develop an approach to keep plastic within the economy and out of landfills and the environment."