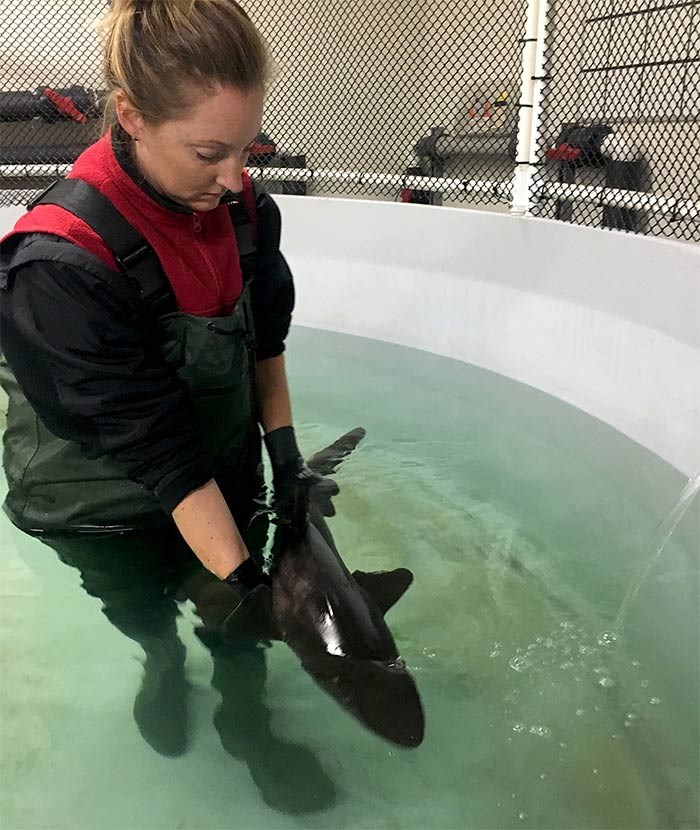 One lucky shark felt the love this Valentine's Day, when it completed its history-making rescue and rehabilitation and was released by the Vancouver Aquarium into the waters of Burrard Inlet Wednesday.

The North Pacific spiny dogfish (Squalus suckleyi) — a species of shark common to B.C. waters — was released on Feb. 14 following six months of rehabilitation at Vancouver Aquarium. This is the first rescue, rehabilitation, and release of a shark for the organization in its 62-year history.

The little shark’s journey back to health began on Aug. 16 of last year, when a concerned beachgoer called the Vancouver Aquarium’s Marine Mammal Rescue Centre upon witnessing a distressed fish on the beach at Lumberman’s Arch in Stanley Park. According to the press release, the aquarium’s Veterinary and Fishes team were notified and responded to the stranded animal, located just 350 meters away.

The female shark was entangled in a fishing net, weakened and disoriented after sustaining significant skin wounds from the net, and from being washed up repeatedly on the sandy shore. Her breathing was shallow. She also had a damaged spiracle and blood in one eye.

“The dogfish was in very poor shape when we found her,” said Dr. Martin Haulena, head veterinarian at Vancouver Aquarium and director of the Marine Mammal Rescue Centre. “Our team, led by veterinary fellow Dr. Amy Gould, provided the 24-hour intensive care required to stabilize the dogfish when she was transferred to the aquarium. The team was in the water, supporting her and ensuring she had water flowing over her gills. Her blood was closely monitored for lactic acid build-up and other parameters. Physical therapy was provided to help dissipate lactic acid, increase tissue oxygenation, and prevent muscle atrophy which could lead to permanent damage to the vertebral column.

"We were very worried that she would not make it through the night, but by morning she was showing signs of improvement.”

In the days following her rescue, the dogfish began swimming independently, and two weeks after, she began eating squid when fed by hand. Over time, the team — with guidance from Seattle Aquarium’s curator of fish and invertebrates Tim Carpenter — helped the dogfish transition to feeding from a target and then foraging for food. As her appetite and diet expanded, her wounds healed and she became much stronger.

“It’s been a long road to recovery for this spiny dogfish and she’s come so far. When her skin lesions were no longer visible, her spiracle and eye healed, and her strength and energy regained, we knew she was ready to return to the wild,” said senior Aquarium biologist Justin Lisaingo. “Seeing her healthy and able to swim away was incredibly rewarding.”

North Pacific spiny dogfish are found in waters from California to Alaska, along the Aleutian chain to the Asian coast and south to Japan. It is listed as a species of Special Concern by the Committee on the Status of Endangered Wildlife in Canada (COSEWIC). The lifespan of the spiny dogfish is estimated to be up to 100 years.

Entanglement by marine debris is a serious issue facing aquatic life, said the aquarium. Ghost fishing gear, including nets and ropes, as well as discarded trash such as the plastic strapping used in packaging and shipping, can become tangled in gills and or snared around the necks of animals and can result in inquiry, suffocation, starvation, and death. If you see a stranded aquatic animal, do not approach it and keep pets away. Instead, you can reach the aquarium’s Marine Mammal Rescue Centre at 604-258-SEAL (7325) for immediate assistance.