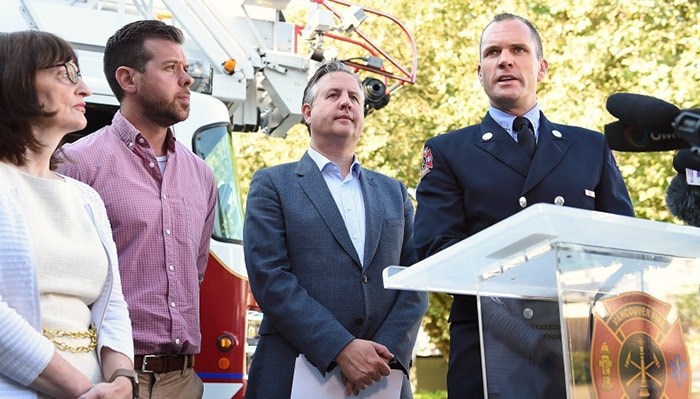 Fire Chief Darrell Reid has delegated one firefighter – Capt. Jonathan Gormick – to work with outreach workers from Vancouver Coastal Health to track down overdose victims typically hard to find, like those who have not accessed health care or failed to make an appointment with a support worker

“We want to make sure they’re recovering and healing,” said Gormick, who spoke at a news conference Friday at the department’s main hall on Heatley Street, where speakers were briefly interrupted by the noise of a firetruck responding to an overdose call.

The team also searches out people who may have refused a trip to the hospital -- which Vancouver Coastal Health says is on the increase -- or checked themselves out of a hospital without getting referred to treatment or services.

In responding to an overdose, firefighters can often get a person’s first name, last known address and information that can help health care workers find people who would otherwise be lost from any continuum of health care.

Over a one-week period, the team of Gormick and outreach workers contacted 22 people who recently overdosed and 21 accepted help. The people were from across the city. The youngest was 18.

“The results of only four weeks of working together have far exceeded any expectations,” Gormick said.

“The results are immediate, impactful and this simple tool is addressing massive barriers such as homelessness, isolation and stigma.”

Chris Dickinson, an outreach worker with Vancouver Coastal Health who has worked alongside Gormick, said the majority of people referred for treatment come from St. Paul’s and Vancouver General Hospital.

“This [project] really increases our ability to contact people, and that is what we want to do – we want to improve our contact attempts and our meetings with people,” Dickinson said. “This really puts us on the ground.”

The team has connected people to income assistance, helped with filling out housing applications and getting them connected with drug treatment therapy.

Dickinson shared stories of finding people simply by firefighters knowing a person’s first name, including a man whom they found at an overdose prevention site on East Hastings.

In another case, the team located a person who had overdosed multiple times and was disconnected from health services. The person had overdosed a few days prior to the team’s search for him.

“After confirming their name and contact information, it became clear that this individual had actually been referred to our team several times and we were unable to connect with them due to missing and incorrect contact information,” Dickinson said.

“It’s these sorts of examples that really highlight the immense importance of this partnership.”

The project is the latest strategy that emergency responders and health care workers have implemented to combat the opioid crisis that saw 389 people die in Vancouver last year.

Dr. Patricia Daly, chief medical health officer for Vancouver Coastal Health, said data from 2017 showed 75 per cent of overdose victims had previous contact with health care services but somehow got lost in the system before they died.

Daly didn’t have statistics readily available but said the number of people refusing to be transported to hospital after an overdose is on the increase.

She said that is probably linked to the amount of naloxone – the overdose reversing drug – available in the community, the increase in injection and overdose prevention sites and people trained to respond to an overdose victim.

“There are 10 times the number of people overdosing as there are deaths, but we’ve seen less people come into the emergency departments,” she said.

“But the 911 calls are staying the same. That tells us people are choosing not to go to the hospital. That’s probably because people in the community have become very good at treating these overdoses.”

Mayor Kennedy Stewart, who also spoke at Friday’s news conference, said he met with Prime Minister Justin Trudeau last week and reiterated his call to him for a safe drug supply –regulated opioids for chronic drug users – to reduce the number of drug deaths.

“I really believe he supports this policy track and I’m hopeful we can get there sooner than later,” the mayor said.