MONTREAL — National Bank of Canada's net income plunged 32 per cent in its second quarter as it put aside five times the provisions for credit losses than it did a year ago due to the economic storm triggered by the COVID-19 pandemic.
May 26, 2020 4:00 PM By: Canadian Press 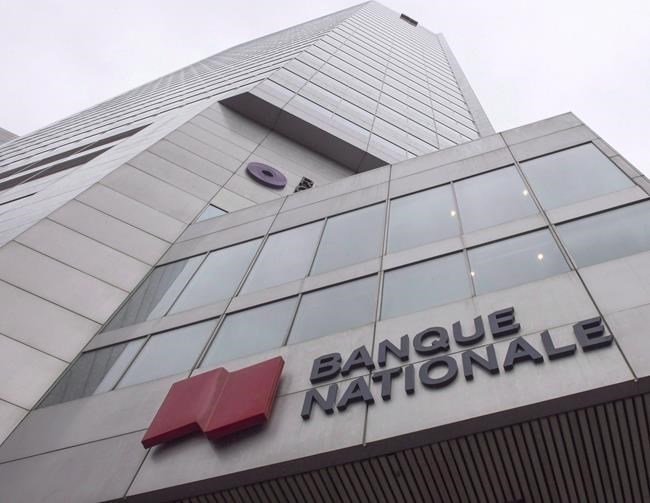 MONTREAL — National Bank of Canada's net income plunged 32 per cent in its second quarter as it put aside five times the provisions for credit losses than it did a year ago due to the economic storm triggered by the COVID-19 pandemic.

The Montreal-based bank said after markets closed that its net income amounted to $379 million for the period ended April 30, compared with $558 million in the same quarter last year.

But after the trough observed in April, the gradual reopening of Quebec — the main market of the sixth-largest bank in the country — suggests better days are ahead, said president and chief executive officer Louis Vachon.

"If we look forward, the economic outlook for the province remains favourable, with its healthy public finances, its diversified economy, less indebted consumers and a well-developed financial support system for local businesses," he said Tuesday during a conference call.

The bank says its diluted earnings per share for the period ended April 30 stood at $1.01, down from $1.51 at the same time last year.

Operating revenues increased 15 per cent to $2.04 billion, with increases coming from all sectors.

Analysts expected the bank would report diluted earnings per share of 94 cents on $1.99 billion of revenues, according to financial markets data firm Refinitiv.

The bank said the company's drop in net income stemmed from the higher amount of money it had to allocate for credit loss provisions amid COVID-19.

That amounted to $504 million, up from the $84 million in the same quarter last year.

Vachon told analysts that the bank started the quarter off on the right foot before containment measures to limit the spread of the novel coronavirus were a game-changer.

"In mid-March, we began to experience the impact of a decline in activity as authorities encouraged Canadians to stay at home," he said.

The "bottom of the barrel" came the week of April 6, when new mortgages were down about 35 per cent compared with the same period a year ago, said Lucie Blanchet, executive vice-president for personal banking and client experience.

The virus has prompted most financial institutions to set aside large sums to offset bad debts. In Quebec, where the pandemic was most severe, Desjardins Group set aside $324 million in its first quarter ended March 31 to cope with credit losses, an amount almost three times higher than a year ago.

At the end of the second quarter, National agreed to allow customers to defer payments on about 114,000 mortgage loans, personal loans, student loans and credit cards.

The bank said it does not expect an increase in bad debt provisions in the coming quarters.

In the personal and commercial banking segment, National's profits plunged 72 per cent to $65 million as it set aside $301 million in credit provisions.

Wealth management profits increased 21 per cent to $141 million as its allowance for credit losses was only $4 million.

National earned $159 million from financial markets after its provisions for bad debts was $162 million, while it earned $74 million from the international segment with $32 million in provisions.

Despite a drop in profits, National did not reduce its quarterly dividend, which remained at 71 cents per share.

This report by The Canadian Press was first published May 26, 2020.

Companies in this story: (TSX:NA)