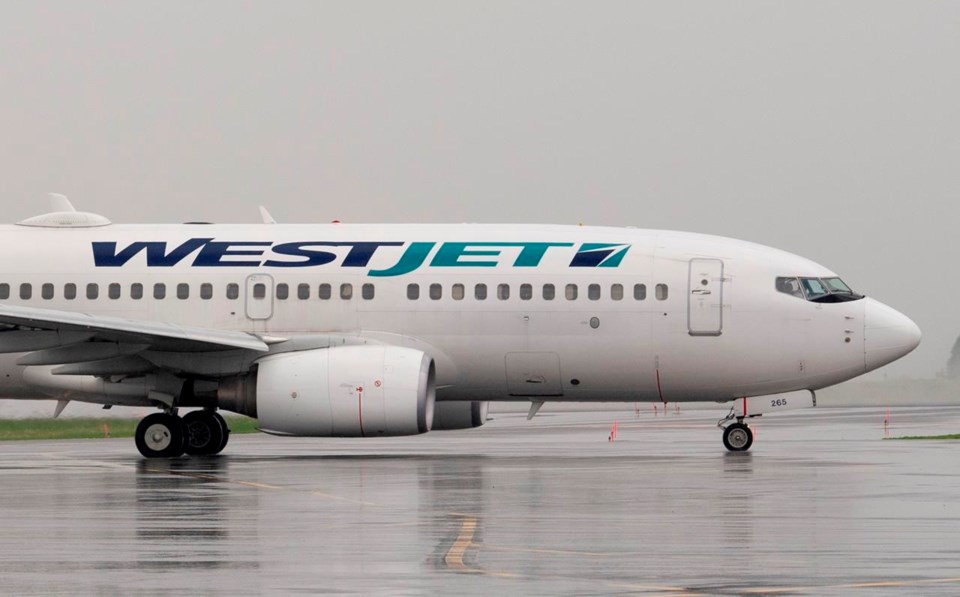 MONTREAL — WestJet Airlines Ltd. says roughly half of its 14,000 employees will leave the company — some temporarily — due to the COVID-19 pandemic.

The 6,900 departures comprise early retirements, resignations and both voluntary and involuntary leaves after WestJet asked staff to choose one of those options or reduce their hours or pay, said CEO Ed Sims. About 700 of the departures are involuntary.

"This is devastating news for all WestJetters," Sims said in a statement Tuesday afternoon. "The fact that we avoided a potentially worse outcome is testament to the spirit and selfless attitude demonstrated by our people, who have enabled WestJet to continue operating with a collective remaining workforce of 7,100."

The first wave of departures is set for Wednesday and the second for April 1.

The figures do not apply to WestJet's budget subsidiary Swoop.

Sims and other executives will take a 50 per cent pay cut, while vice-presidents and directors will see their salaries reduced by 25 per cent, the company said.

It is not laying off any pilots after the Calgary-based carrier reached a deal with the Air Line Pilots Association to reduce flying hours, the company said.

However, up to 600 Air Canada pilots will go on unpaid leave in the coming months due to the fallout from the virus, their union said Tuesday.

The union agreed to a plan late Monday for a maximum of 600 pilots on furlough, said Captain Michael McKay, head of the Air Canada Pilots Association.

The pilots have also agreed to reduced pay across the board and "simplified contract language" to allow them to retire earlier, he said.

"Like all Canadians, the more than 4,400 pilots of Air Canada and Air Canada Rouge have been deeply affected by the impact of the COVID-19 pandemic, personally and professionally, with the precipitous drop in passenger demand and the challenging operating environment," McKay said.

He is joining other unions in calling on Ottawa for financial relief for the aviation industry.

Due to the complexity of pilot training, the precise number of positions immediately affected at the country's largest airline remains unclear, he added.

On Thursday, the union representing Air Canada's flight attendants said the company will temporarily lay off more than 5,100 members.

The travel industry continues to reel as borders stay closed and planes parked across the globe.

Air Canada announced last week it is suspending most of its U.S. and overseas flights in response to border shutdowns. WestJet has cancelled all international flights for 30 days and, like Air Canada, severely scaled back domestic capacity. Porter Airlines and Transat AT Inc. are suspending all of their flights.

Global passenger revenues could plummet by $252 billion this year, a 44 per cent drop from 2019, the International Air Transport Association said Tuesday.

"Airlines are fighting for survival in every corner of the world," IATA director general Alexandre de Juniac said. "Travel restrictions and evaporating demand mean that, aside from cargo, there is almost no passenger business. For airlines, it's apocalypse now."

In a matter of weeks the trade group's worst case scenario — $113 billion in lost revenue forecasted on March 5 — has become much sunnier than current projections.

"Without immediate government relief measures, there will not be an industry left standing," de Juniac said, calling for $200 billion in relief.

He cited nine states including Australia, China and Sweden that have pledged aid packages in the form of loans, delayed fee payments and other measures.

IATA forecasts that revenue passenger kilometres — a key industry metric that measures the mileage racked up by paying passengers — will drop 38 per cent across the industry in 2020.

By that metric, the association projects the North American market will fare better than any other continent with a 27 per cent decline in revenue passenger kilometres, however.

The U.S. and Canada remain much more dependent on air travel than Europe and parts of East Asia, which enjoy a robust high-speed rail network and denser population clusters.

Companies in this story: (TSX:AC, TSX:TRZ)