TORONTO — With sheer optimism and a considerable amount of uncertainty ahead of them, two Toronto businessmen with strong political ties are betting on returning the languished Torstar Corp.
May 27, 2020 4:04 PM By: Canadian Press 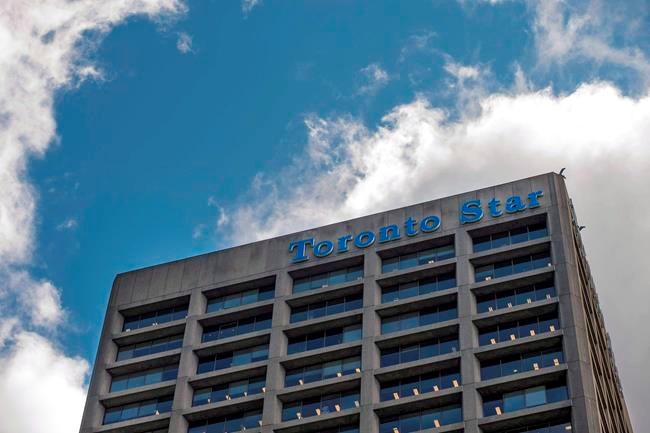 TORONTO — With sheer optimism and a considerable amount of uncertainty ahead of them, two Toronto businessmen with strong political ties are betting on returning the languished Torstar Corp. to a viable business, outside the prying eyes of public investors.

NordStar Capital, owned by Jordan Bitove and Paul Rivett, struck a $52-million agreement to take the struggling media company private, including its Toronto Star newspaper and various local news outlets it operates in other cities.

It's a bold move in one sense and risky in another, some industry observers suggested. While both men have a considerable resume of business experience — Bitove helped launch the Toronto Raptors and Rivett served as the president of investment giant Fairfax Financial Holdings — they're hardly grizzled veterans of the unforgiving news industry and its many hurdles.

"It's a good, solid news brand to buy into, absolutely," said Bob Cox, publisher of the Winnipeg Free Press and chair of News Media Canada, which represents daily and community newspapers across the country. He pointed to the value in Torstar's papers that include the Hamilton Spectator, Waterloo Region Record, four other dailies and some 70 weeklies.

Even so, he said, "there's still a tremendous amount of pessimism about the newspaper industry."

Shares of Torstar gained 50 per cent in value on Wednesday, the first day of trading since the agreement was announced. The company's shares closed 20 cents higher at 60 cents per share on the Toronto Stock Exchange.

The NordStar offer is 63 cents per share for all of Torstar's outstanding class A shares and class B non-voting shares, and requires shareholder and regulatory approval before its anticipated close in the third quarter.

Bitove and Rivett are walking into a Canadian media industry that was rife with financial challenges years before the pandemic dealt another blow to advertising revenues. Now, with the economy faltering, some publishers have predicted much tougher times ahead unless the government steps in to offer greater financial assistance.

But the longer-term outcome could be "promising," suggested Gavin Adamson, assistant professor at the Ryerson School of Journalism, who believes there's a chance that pulling the company off the scrutinizing public market could benefit attempts at a turnaround by its new owners.

"Maybe they're willing to run the business at a loss for much longer than shareholders would be so they... can take their time and figure out what they want to do," he said.

"My assumption is that all options will be on the table."

Adamson pointed to a number of factors that could determine the direction of Canada's media landscape in the coming months.

Publishers that represent a majority of Canadian newspapers signed an open letter to the federal government earlier this month calling for immediate action to make digital giants like Facebook and Google share their advertising revenues with Canadian media companies. Their argument is the technology companies benefit from the resources of Canadian news outlets to drive traffic to their platforms, but offer little financial support in return, apart from a series of grants to select outlets.

"(More support from tech giants) would totally change the financial picture for Torstar and others," Adamson said.

"This option buys news entities time to try to find a solution that works better than endless cuts to editorial."

Media executives have been in conversations with the federal government over emergency measures, and the participation of Bitove and Rivett could certainty help those talks.

Torstar CEO John Boynton addressed the "strong connections" both men have in Ottawa during a town hall meeting with staff on Wednesday. One of the questions focused on their political leanings after it was found they've both made donations to the federal Conservatives and other parties in recent years.

"And we would hope they could start using some of those connections to help us in Ottawa with some of those systemic issues, especially that we have with FANG (Facebook, Apple, Netflix and Google), and trying to level the playing field Canadian companies have with American companies who are treated better than we are."

Torstar has levelled significant layoffs on its staff, sold assets and closed newspapers in an effort to improve its balance sheet in recent quarters as a publicly traded company.

Rivett believes taking the company private will help focus on the "digital transformation" of its news brands, which has been led by president and CEO John Boynton for the past three years, but hindered by efforts to meet quarterly financial expectations.

"They're a little bit behind their competitors in North America, for sure, and so there's some catching up to do," he said in an interview.

"That digital transformation is taking time, but the hard work needs to continue and it's just easier to continue in private."

Bitove added that part of his motivation is to help steer the future of a Canadian media company: "It's never been more important to have responsible, truth-based journalism than it is right now ... Paul and I really take delight in the fact that we can be the guys to really help deliver that message."

Torstar holds an investment in The Canadian Press as part of a joint agreement with subsidiaries of the Globe and Mail and Montreal's La Presse.

— with files from Tara Deschamps

Companies in this story: (TSX:TS.B)