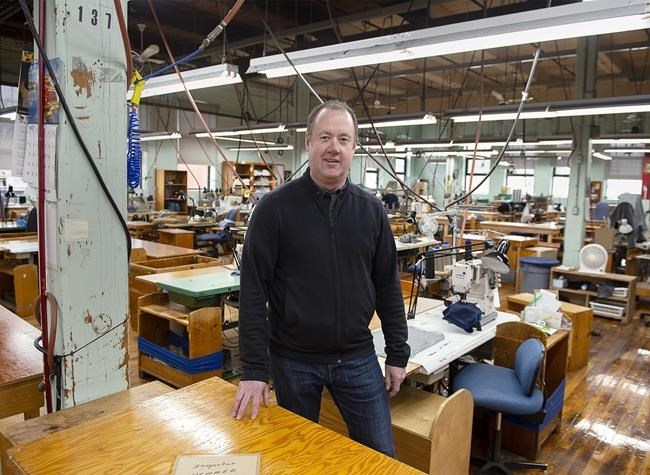 HALIFAX — An Atlantic Canadian undergarment company that quickly retooled its factory last spring to make personal protective equipment is laying off 150 workers after failing to win a new federal contract.

Stanfield's Ltd. of Nova Scotia, famed for its long johns and boxer shorts, switched to making medical gowns for front-line health workers at the outset of the pandemic.

But the historic Truro clothing manufacturer was left out of the most recent round of federal contracts.

All nine of the successful bidders on a new request for proposals for medical gowns are in Canada's three most populated provinces: Ontario, Quebec and B.C.

Jon Stanfield, the chief executive of the fifth-generation family firm, said he is disappointed in the tender process.

The company was first to step up when the need arose for a domestic supply of medical gowns and has continued to invest in equipment, training, fabric and maintaining its factory in a ready state, Stanfield said.

Rather than lay off workers last fall when its contract ended, Stanfield's continued to make medical gowns and now has about 300,000 stockpiled.

"We wanted to keep our readiness factor high," he said. "We're also in rural Nova Scotia where jobs aren't plentiful and I wanted to keep people employed through this process."

When the company announced it was hiring workers to make medical gowns last spring at an hourly wage of $17, Stanfield said the clothing manufacturer received about 600 applications.

"People wanted to support the cause and had great passion and the wage would help their families."

"Our community stepped up when our country was in crisis," the Cumberland-Colchester representative said in a statement on Facebook. "I’m grateful and proud of the work our citizens have done in the past year to help our country at a time of great need."

It's not the first time Stanfield's has stepped up to assist in a time of national need.

In the 1890s, the company invented shrink-proof heavy woollen underwear used by workers during the Klondike gold rush; in the First World War, the factory was converted to provide wool blankets to keep soldiers warm in the trenches; and in Second World War, it supplied base layers of underclothing.

The company's $27.9-million federal contract to make medical gowns was a small piece of the $1.87 billion Ottawa had contracted out as of Dec. 31.

Nova Scotia's Minister of Inclusive Economic Growth, Labi Kousoulis, was asked what help the province could provide to Stanfield's following cabinet on Thursday.

"We have purchased gowns from Stanfield's over the last year," he said, "so I would ask Stanfield's to reach out to our procurement people at the health authority.

"If we are short on any type of PPE whether it be gowns, masks, or needles my anticipation is that the health authority is doing everything it can to procure those."

"These aren't job numbers, they represent people getting up and going to work every day," he said in a statement on Facebook. "These were people supporting Canadian front line health workers during a global pandemic."

Public Services and Procurement Canada said the request for proposals for "disposable medical isolation gowns" was issued on behalf of the Public Health Agency of Canada last October.

The bidding process was only open to Canadian manufacturers, and the companies are required to do all cutting, sewing and assembly here in Canada, the department said in an email.

The department received 71 bids and in February awarded contracts to nine manufacturers.

Stanfield said he's not condemning the companies that won. But he said he's aware of some of the winning bidders that are now trying to source fabric and other supplies.

Stanfield said the company is prepared to step in and help if there are issues with filling capacity.

The winning bidders must deliver a minimum of 24,000 gowns within 60 days of the contract being awarded to demonstrate guaranteed capacity. All gowns must be delivered before the end of September 2021, Public Services and Procurement Canada said.

-- With files from Keith Doucette in Halifax.

This report by The Canadian Press was first published March 4, 2021.

CRTC sides with Videotron in dispute with Bell over access to poles, other structures
Apr 16, 2021 2:34 PM