"With colder months approaching, the foodservice sector will need continued assistance to keep fulfilling its critical role within the Canadian economy”
Aug 15, 2020 5:30 PM By: Andrew Duffy 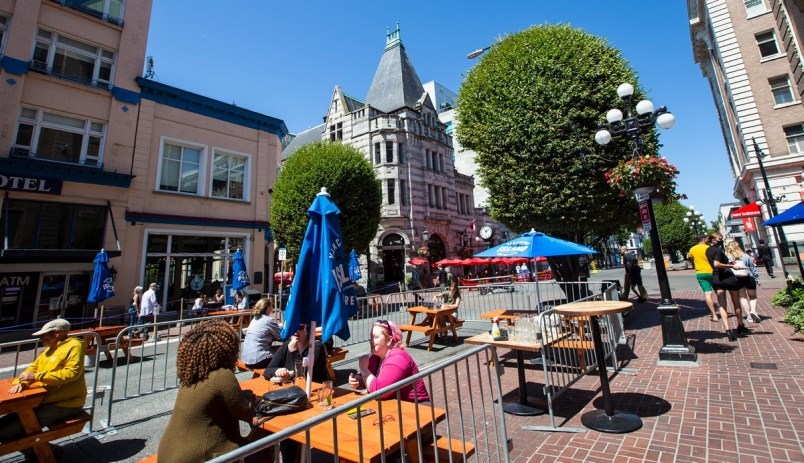 Customers of restaurants and bars on Government Street in downtown Victoria take advantage of the opportunity to eat and drink in the sunshine on Thursday. Photograph By DARREN STONE, TIMES COLONIST

Citing the slow pace of recovery and the more than 300,000 workers still unemployed, the Canadian restaurant industry is urging the federal government to continue relief through the COVID-19 pandemic.

The organization also asked for reduction in red tape and other measures.

“Many of the measures that the federal government has introduced over the last few months have provided a lifeline to restaurants during these extraordinarily challenging times,” said David Lefebvre, vice-president of Restaurants Canada.“But with colder months approaching, the foodservice sector will need continued assistance to keep fulfilling its critical role within the Canadian economy.”

Restaurants Canada pointed out the $93-billion industry was one of the hardest hit and is expected to be one of the last to fully recover.

In its submission to Ottawa, the group estimates the industry could lose as much as $44.8 billion in annual sales compared to 2019. It also notes more than half of its membership is currently operating at a loss.

By April, it said, more than 800,000 foodservice workers had lost their jobs or had their hours cut down to zero.

The association is asking for the financial relief programs introduced over the past few months to continue into 2021, and is urging changes to the tax regime to further support businesses struggling with cash flow.

The group is also asking for sector-specific measures to address some of the unique challenges that restaurants and other foodservice businesses have endured due to the COVID-19 pandemic.