OTTAWA — Canada's merchandise trade deficit narrowed to $983 million in February compared with $1.7 billion in January, as the economic impact of COVID-19 showed some of its first signs with a drop in trade with China.
Apr 2, 2020 9:27 AM By: Canadian Press 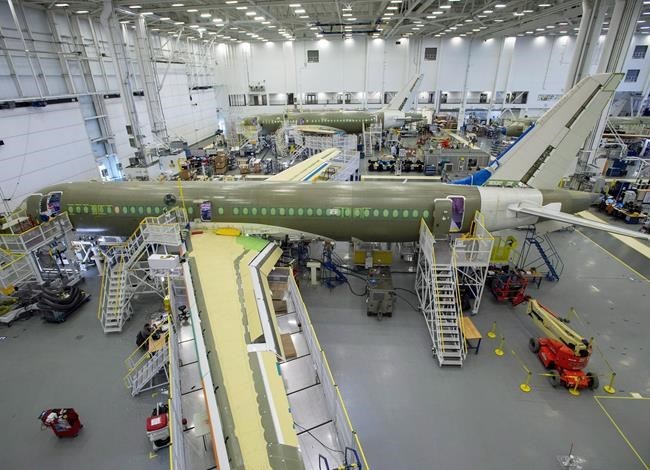 OTTAWA — Canada's merchandise trade deficit narrowed to $983 million in February compared with $1.7 billion in January, as the economic impact of COVID-19 showed some of its first signs with a drop in trade with China.

Statistics Canada said Thursday imports from China, where the outbreak began, fell 6.8 per cent in February after reaching their lowest level in three years in January.

"Lower imports of computers and peripherals, cellphones, and clothing and accessories were the main contributors to the decline," the agency said.

Exports to China fell 6.4 per cent in February.

TD Bank economist Omar Abdelrahman said the outlook for trade will likely deteriorate markedly in March and April as steps taken to slow the spread of COVID-19 in North America took hold.

"Importantly, the commodity price shock will also change Canada's trade landscape in the quarters ahead," Abdelrahman wrote in a report.

"The nose dive in oil prices will impact Canada's nominal exports and its terms of trade, which will weigh on national income."

Statistics Canada said the impact of COVID is coming in March as a number of North American automotive manufacturers halted production. It also noted that the drop in crude oil prices may impact the results as well as factory closures.

The smaller trade deficit for February came because of higher exports of aircraft, while imports fell in part due to lower crude oil imports.

Economists on average had expected a deficit of $1.87 billion for February, according to financial markets data firm Refinitiv.

Exports rose 0.5 per cent to $48.3 billion in February as eight of the 11 sectors moved higher, while in volume terms, exports increased 2.7 per cent.

Exports of aircraft and other transportation equipment and parts rose 18.5 per cent, boosted by aircraft which rose 46.8 per cent to hit their highest level in five years due to an increase in private jet exports. Excluding aircraft, total exports fell 0.3 per cent.

Imports fell 0.8 per cent to $49.3 billion, the lowest level in the past two years as seven of the 11 sectors tracked moved lower, while imports in volume terms fell 1.2 per cent.

Imports of energy products fell 16 per cent, with lower crude oil shipments from the U.S. the largest contributor to the decline.

This report by The Canadian Press was first published April 2, 2020.