Natalie Rahey and Blair Skrupski were supposed to be standing under a wedding canopy in three weeks, hand in hand on a Caribbean beach surrounded by friends and family.
Apr 6, 2020 1:36 PM By: Canadian Press 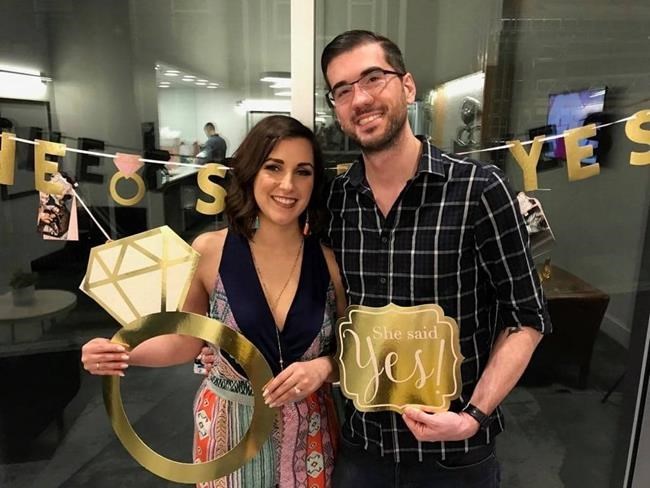 Natalie Rahey and Blair Skrupski were supposed to be standing under a wedding canopy in three weeks, hand in hand on a Caribbean beach surrounded by friends and family.

Instead the Halifax couple was left holding nothing but a travel voucher and a lighter bank statement after Air Canada Vacations cancelled their flight — one of thousands cut amid the near-total shutdown of the airline industry due to the COVID-19 pandemic.

Their nuptials in Mexico's Riviera Maya are on hold as they and their nearly three dozen guests grapple with the more than $50,000 that now sits in an Air Canada account.

Rahey said their travel voucher — valid for the next 24 months — requires them to rebook at the same resort for the same price or more within the next two years, even if cheaper options become available.

"If the cost to rebook our wedding is more expensive, we have to pay more. But if it’s less, we don’t get the difference back. Air Canada gets to keep that money. And no refund was offered," Rahey said.

"To feel like we’re not being taken care of is just incredibly disappointing."

Travellers and travel agents alike are increasingly fed up with refund policies and customer service at Canadian airlines amid the COVID-19 pandemic, with no word yet on what strings might come attached to a potential bailout for the struggling sector.

A petition calling on Ottawa to refuse an aid package to any airline that does not refund customers for cancelled flights now touts roughly 3,000 signatures.

Most Canadian carriers are offering customers flights rebookings or vouchers — but not refunds — amounting to hundreds of millions of dollars in effective interest-free loans to airlines from passengers, said Toronto resident Bob Scott, who launched the petition last week.

"It’s absolutely disgraceful," he said. "I’ve never seen anything — anything — like the fury that’s being unleashed at the airlines by consumers on this issue."

Customers aren't the only ones getting sick of the turbulence.

Travel agent Barbara Broomel says Air Canada has been "very hard" to reach, leaving her torn about whether a tour group should make their next $6,000 payment for a European trip that may yet be cancelled.

"They’re asking me, 'What do we do? Do I make the final payment?' This is all up in the air," said Broomel, who is based near Buffalo, N.Y., and works with Canadian clients.

Faced with an unprecedented drop in travel demand, Air Canada has nonetheless worked with the federal government to overcome border closures and repatriate tens of thousands of Canadians stranded in places ranging from Morocco to Peru.

"I know their hands are full," Broomel said, but noted that carriers such as Lufthansa and Delta Air Lines offer agents regular updates or dedicated help lines. "It doesn’t have to be like this. And I’m in agony over making the wrong decision for other people."

Air Canada, which has cut flying by about 90 per cent for the next two months, did not respond to a request for comment Monday.

Its website states that "cancellations that are caused by COVID-19 are beyond our control," but that the company will provide "a flight credit of equal value for a future ticket purchased within 24 months" of the cancellation date.

While U.S. and European Union officials have ordered airlines to reimburse customers for cancelled flights, a statement on the Canadian Transportation Agency website says airlines are not obliged to refund passengers for flights suspended due to the novel coronavirus or other reasons outside a carrier's control.

Advocates say the statement, which is unsigned, lacks the authority of an official ruling, each of which is signed by one or more of the members who comprise the tribunal.

If a flight is cancelled because of events beyond an airline's control, the carrier must provide alternate arrangements, but not a refund, according to passenger rights rules passed last year. However, most airlines have a tariff — the contract between airline and passenger — that stipulates refunds in such cases.

WestJet's tariff that states that "the unused portion of the passenger's ticket(s) will be refunded...should the alternate transportation proposed by the carrier not meet the passenger's satisfaction," in the event of a cancellation beyond the carrier's control.

Despite that pledge, WestJet's website says that it is "not processing refunds to original form of payment at this time," and highlights future travel credit instead.

The Canadian branch of the Air Line Pilots Association, which represents pilots at WestJet and 13 other domestic carriers, is calling for a stimulus package similar to relief measures announced in the U.S.

The aid bundle stipulates that airlines seeking a slice of US$25 billion in federal grants cannot impose furloughs or pay reductions until October. Stock buybacks are prohibited for more than a year and executive compensation must be reigned in.

Air Canada, which netted $1.48 billion in profits last year, has seen its share price soar over the past decade, outperforming all other Toronto Stock Exchange companies to earn a 3,575 per cent return between 2010 and 2019, CEO Calin Rovinescu noted in February. Helping to boost the price was the company’s share repurchase program, where it poured more than $800 million into buying back its own stock since 2015, shrinking the supply of shares on the market.

Air Canada had $7.3 billion in cash as of last month, more than the most profitable U.S. carrier, Delta Air Lines.