VICTORIA — The provincial health officer says a back-to-school ad being criticized by the B.C. Teachers' Federation as unrealistic wasn't meant to be a commercial about what classrooms would look like. Dr.
Aug 31, 2020 5:17 PM By: Canadian Press 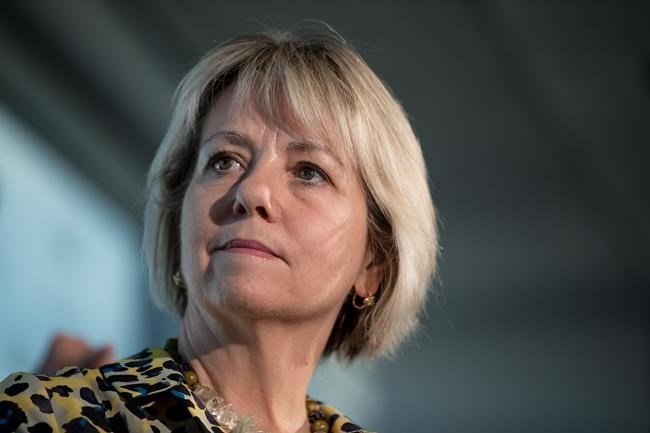 VICTORIA — The provincial health officer says a back-to-school ad being criticized by the B.C. Teachers' Federation as unrealistic wasn't meant to be a commercial about what classrooms would look like.

Dr. Bonnie Henry said Monday the commercial was an opportunity to answer the many questions she's getting from children about what to expect at school and to allay their anxieties.

The ad shows a few elementary students in a classroom, with Henry telling them they'll be washing their hands a lot and spending most of their time with the same schoolmates and teachers.

The Education Ministry earlier responded to the union's criticism by saying the number of students in the commercial was kept low in keeping with physical distancing requirements.

Teri Mooring, head of the teachers union, said most classes will have about 30 students, so physical distancing won't be possible.

She said it was a very unfortunate, unrealistic depiction of what classrooms are going to look like in September.

"I think what parents and teachers are really looking for is that reassurance to come from the restart plan," Mooring said, adding school districts should be given federal funding announced last week so they can hire more teachers in order to have smaller classrooms.

Henry said students will remain in their learning groups in order to reduce the chance of transmitting COVID-19.

Health Minister Adrian Dix said the ad was aimed at delivering a public health message consistent with the plan that's already been announced, not a public policy debate.

"It's not Central Casting. It's a conversation between the public health officer and children and in that sense I think it's useful."

Jason Ellis, an associate professor at the University of British Columbia's department of education, said the ad accomplishes the aim of highlighting students' anxieties.

"It's an ad, not a documentary," he said, adding any objective by the union to embarrass the government is not helpful.

Ellis said it's not realistic for the teachers union to expect school districts to hire more teachers with $242 million in federal funding, with half of that coming next year.

He said $121 million would only amount to the hiring of 1,200 teachers in a province with 35,000 teachers, so that won't help much in reducing class size.

British Columbia hired about 4,000 teachers between 2016 and 2019 after a Supreme Court of Canada decision, but that only helped reduce class sizes by about one or two students, Ellis said.

"We don't have as many teachers available as they'd like to see to reduce class sizes — that's an unrealistic expectation," he said.

— By Camille Bains in Vancouver.

This report by The Canadian Press was first published Aug. 31, 2020.