OTTAWA — The head of the UN World Food Program says the COVID-19 crisis has dramatically increased the number of starving people in Latin America, which could trigger a refugee exodus to North America if not addressed.
Aug 1, 2020 3:13 AM By: Canadian Press 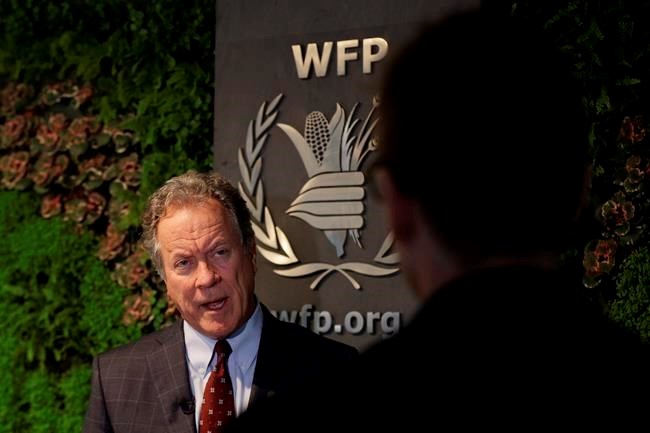 OTTAWA — The head of the UN World Food Program says the COVID-19 crisis has dramatically increased the number of starving people in Latin America, which could trigger a refugee exodus to North America if not addressed.

David Beasley, the agency's director, issued the warning as the Royal Canadian Air Force began Saturday to prepare to end its nearly two-week mission in which a mammoth C-17 Globemaster transport crisscrossed Central and South America and the Caribbean delivering tonnes of medical supplies.

Beasley said there has been a 269 per cent increase in food insecurity in the region since the pandemic struck.

Beasley tells The Canadian Press that 4.7 million people were already "marching to the brink of starvation" before the pandemic but now that number has risen to 16 million.

Beasley praised Canada for lending the Globemaster and nearly three dozen personnel to work in tandem with the WFP and World Health Organization to deliver supplies throughout the region from a newly built hub in Panama.

However, he said unless the world answers the biggest humanitarian crisis in the World Food Program's history, people will die and economic and political upheaval will ensue.

The agency is launching a six-month US$4.9 billion appeal to help feed 138 million people in 83 countries. Since the pandemic struck there have been serious food-insecurity increases in west and central Africa (135 per cent) and southern Africa (90 per cent).

"The first thing is: let's do what's good; let's do what's right. And if that's not good enough, do it out of your national-security interest," Beasley said in an interview.

"If patterns of experience are of any indication, if the economic deterioration due to COVID continues as it is, and we don't have safety-net programs in place, I don't see how you don't have mass migration," he added.

"You won't have a mass migration today, tomorrow, but you will have it soon."

The region was already struggling under the weight of Venezuela's political and economic crisis. Prior to the pandemic, the UN estimated that six million Venezuelans would flee their country by the year's end, as its economic, health and education systems collapsed. Neighbouring countries such as Colombia, Peru, and Ecuador have been bearing the brunt of the influx.

While those countries have been welcoming, COVID-19 has added an extra layer of strain and Beasley said the leaders of those countries told him last week they are extremely worried.

"This is why the international community has to step up. Otherwise there's going to be chaos," he said.

"And we have a vaccine for this chaos — it's called food."

The former Republican governor of South Carolina visited Ottawa in mid-March, meeting multiple Canadian politicians right before the pandemic slammed normal activities to a halt. Beasley would test positive for COVID-19 himself days later, touching off a short-lived panic and rush of testing among the MPs and officials he saw; he's since recovered.

Beasley was in Panama last week as part of a six-country tour, where he met Lt.-Col. Adam Pentney, the commander of Canada's military airlift. He also met with Pentney's crew as they loaded tonnes of personal protective equipment, medical supplies and other humanitarian supplies onto the Globemaster.

"That C-17 is a workhorse and it is a blessing in a time when we need it most. As you can imagine, we're extremely grateful to the Canadian government for providing this support," said Beasley.

"It was a beautiful sight. It was absolutely magnificent because that's life-saving humanitarian support. It shows what happens when the world collaborates."

Pentney said the C-17 mission is the first time he has been part of such a large humanitarian relief effort so close to home.

"It's in a region where we don't often get to visit," Pentney said in a telephone call from Panama this past week, where he was preparing to pilot the Globemaster's final mission himself.

Friday's mission to Guatemala was to be its last before the start of weekend preparations to the bring the plane and the 31 people supporting it back to Canada.

"My message to Canadians is they can be very proud of the support that's being provided and the work that's being done to look after our global neighbours," said Pentney.

"The pandemic is very real here. Canada does have a role and a presence here in our backyard and we're happy to be able to contribute to that."

Pentney said he didn't know if another Globemaster crew would be returning. But Beasley said he's ramping up his fundraising efforts to target another group of donors because he said governments around the world are already strapped because of the pandemic.

"We're in the worst crisis since World War Two and it's time for the billionaires to step up and say, 'We care about humanity, we care about planet Earth' because we are at a crossroads on this planet right now," said Beasley.

"The billionaires, especially those that are making billions because of COVID, they need to step up. We're taking about millions of people dying."

This report by The Canadian Press was first published August 1, 2020.