OTTAWA — The Bank of Canada will need to maintain its independence to aid the economy during and after the COVID-19 pandemic, particularly as the country's debt levels rise, says the bank's second-in-command.
May 4, 2020 2:27 PM By: Canadian Press 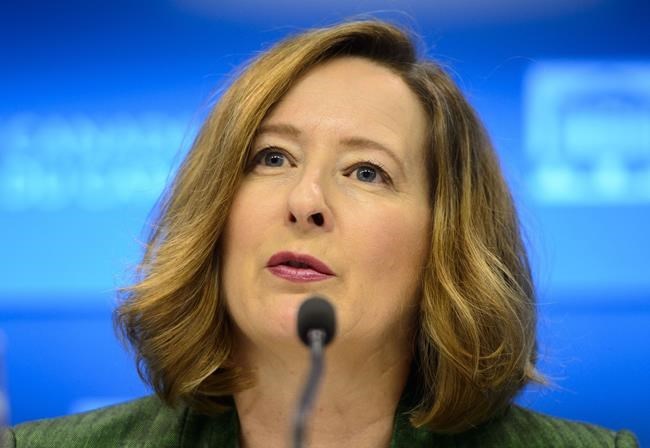 OTTAWA — The Bank of Canada will need to maintain its independence to aid the economy during and after the COVID-19 pandemic, particularly as the country's debt levels rise, says the bank's second-in-command.

In a speech on Monday, senior deputy governor Carolyn Wilkins detailed how the bank's actions through the pandemic have been aimed at ensuring businesses and individuals can access lines of credit and short-term loans, and spur demand during an expected recovery through low interest rates.

The bank's balance sheet has more than tripled from around $120 billion in early March before the shutdown, to around $385 billion as of last week as it purchases more federal and provincial bonds, effectively providing low-cost loans to finance government stimulus that federally stands at roughly $146 billion.

Wilkins said the financial risk to taxpayers is low because of restrictions around the bond purchase programs.

The country will be left with more public and private debt than before the pandemic forced a freeze on economic activity, she said.

"Whether it's a risk of inflation or deflation, central bank credibility is critical," she said in the text of her speech posted online by the bank.

"This requires keeping our eye on the ball in terms of our mandate and retaining the operational independence to achieve it."

The question of keeping the bank free of political influence faced Finance Minister Bill Morneau last week when he unveiled the next governor, Tiff Macklem.

The Liberals and central bank have an "effectively working relationship," Morneau said at the Friday press conference, adding the Liberals see "the independence of the Bank of Canada as critical" to the future of the economy.

Wilkins was considered a top candidate to replace outgoing governor Stephen Poloz, just as  Macklem had been the favourite seven years ago when he was the bank's No. 2 and Poloz got the top job.

The choice to appoint Macklem received praise in some quarters: private sector economists spoke highly of his skills and environment groups saw promise in his interest in the effects of climate change on the economy.

"Canada needed to move climate change to the front of the financial line, and with Tiff as incoming governor that need has been met," said Blair Feltmate, head of the Intact Centre on Climate Adaptation at the University of Waterloo.

But there was criticism as well, including from some women's groups who questioned why Prime Minister Justin Trudeau's government didn't appoint Wilkins to head an institution that has never had a female governor.

"We made the determination on who would be the best to see us through this difficult time and seven years into the future as well, and I know that Tiff Macklem will do just that," Trudeau said Monday outside his Ottawa residence.

The bank estimates that pandemic-related restrictions — which have closed non-essential businesses, led to 7.3 million people receiving federal aid, and 96,000 businesses asking for a wage subsidy for 1.7 million employees — will result in a 15 to 30 per cent drop in gross domestic product for the second quarter from its level in late 2019.

Wilkins said the bank hasn't published a full forecast because of the uncertainty about when restrictions will be lifted. There could also be other head winds slowing a recovery, she said, citing low oil prices.

"But even in a good scenario, lost output will be made up only gradually as containment measures are lifted, people return to work and production ramps up," she said.

That level of uncertainty is why the Liberals have yet to introduce a budget, Trudeau said.

The government had pledged to introduce the spending blueprint at the end of March, but scuttled plans after MPs agreed to put the House of Commons on an extended hiatus as the pandemic took hold.

Conservative Leader Andrew Scheer said Monday the time is right for the government to start work on a budget as provinces move to reopen their economies. He said it should at least release an economic update by summer.

Trudeau said the Liberals are looking at when to present a budget or an economic update.

This report by The Canadian Press was first published May 4, 2020.

— With files from Mia Rabson and Stephanie Levitz

'It's not just about me': McKenna cites need to protect politicians from threats
Aug 13, 2020 11:53 AM
Comments
We welcome your feedback and encourage you to share your thoughts. We ask that you be respectful of others and their points of view, refrain from personal attacks and stay on topic. To learn about our commenting policies and how we moderate, please read our Community Guidelines.