B.C. Liberal leader stepping down after losing seats in election

VANCOUVER — The B.C. Liberal party is looking for a new leader following Andrew Wilkinson's announcement Monday he's quitting and will leave as soon as a replacement is selected.
Oct 26, 2020 4:36 PM By: Canadian Press 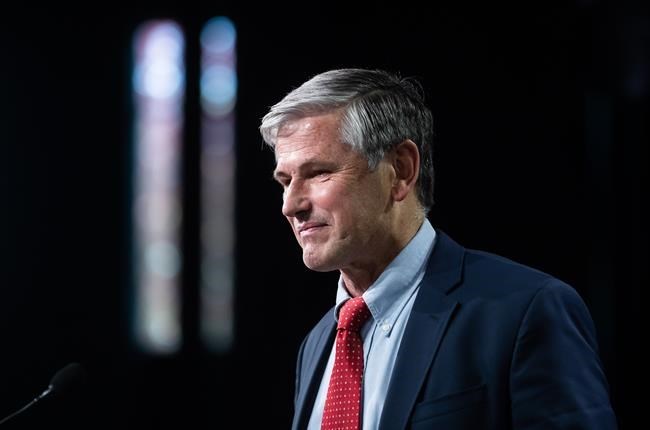 VANCOUVER — The B.C. Liberal party is looking for a new leader following Andrew Wilkinson's announcement Monday he's quitting and will leave as soon as a replacement is selected.

His decision comes after the New Democrats led by John Horgan won a majority government in Saturday's election.

Wilkinson said he's asked the party president to work with the executive to determine a timeline for the leadership process to pick his successor.

"Leading the B.C. Liberals has been a great honour, but now it’s time for me to make room for someone else to take over this role," said Wilkinson, 63.

He read a statement during a livestreamed news conference and did not take questions.

He said he spoke with several Liberal caucus colleagues and newcomers on Monday before his announcement.

"So today we begin the challenging and exciting process of rebuilding the party. And we do with a very strong base of elected members in the legislature and a strong membership throughout British Columbia."

The Liberals lost about a dozen seats in Saturday's election, although there are still 525,000 mail-in ballots to be counted.

Wilkinson said he called Horgan on Sunday to congratulate him on the NDP's victory.

Wilkinson was elected Liberal leader in February 2018, replacing Christy Clark, who stepped down when the Liberals lost power after the 2017 election.

He served in several cabinet positions when the Liberals were in government, including justice and advanced education.

Horgan issued a statement thanking Wilkinson for his service to the people of B.C. and for his role as Opposition leader.

"I've done that job, and I've often said it is the toughest job in politics. Mr. Wilkinson led the official Opposition through a very challenging time for our province," said Horgan. "He ran a spirited campaign and I wish him the best in the future."

The Liberal election campaign centred on promises to cancel the provincial sales tax for one year, eliminate the small-business income tax and open up the province's public auto insurance system to competition.

But Wilkinson was often on the defensive after one Liberal candidate made sexist remarks about an NDP member and another voted as a local councillor against a rainbow crosswalk. Then incumbent legislature member Laurie Throness left the party late in the campaign to continuing running as an Independent after comparing free birth control to eugenics.

The Liberals' membership chair, Nicole Paul, criticized the party's leadership on Twitter during the campaign, saying there has been a "lack of willingness to stand up for diversity, inclusion and the values of B.C. Liberal members — not just the interests of a small group of constituents.''

Wilkinson also faced criticism for not responding quickly enough to the controversial incidents involving his candidates.

Liberal legislature member Mike Bernier said Wilkinson ran an excellent campaign but the party was up against the NDP's decision to call a snap election more than a year ahead of the scheduled date at a time when voters were more focused on the pandemic.

"Andrew worked really hard," said Bernier, who was re-elected in Peace River South. "He ran an amazing campaign, which was an uphill battle from Day One. He worked harder than anyone I've seen in a long time."

Prof. Sajay Jeram, who teaches political science at Simon Fraser University, said on Sunday that Wilkinson likely did not resonate with voters because he came with baggage tied to past Liberal governments.

"The rebrand for the Liberals may start with the leader," he said in an interview. "A leader who can bring a distinct feeling to the party, something fresh. Andrew Wilkinson definitely did not bring that."

Before Wilkinson was elected in 2013 to represent Vancouver-Quilchena, he held senior positions in the provincial government.

He was a deputy minister at Economic Development and served in the same position in the premier's office under former premier Gordon Campbell, where he was responsible for intergovernmental relations.

Outside of politics, Wilkinson has worked as a lawyer in Vancouver and as a doctor in Campbell River, Lillooet and Dease Lake.

— By Dirk Meissner in Victoria.

This report by The Canadian Press was first published Oct. 26, 2020.

Exclusion of mental health as grounds for assisted death is likely temporary: Lametti
Nov 23, 2020 3:51 PM
Comments
We welcome your feedback and encourage you to share your thoughts. We ask that you be respectful of others and their points of view, refrain from personal attacks and stay on topic. To learn about our commenting policies and how we moderate, please read our Community Guidelines.