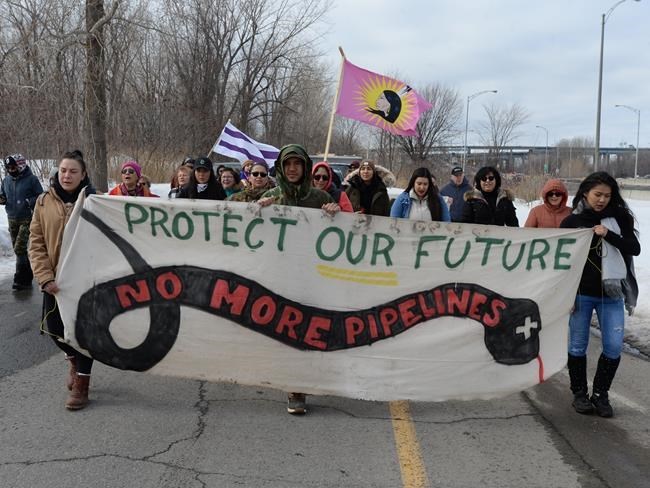 KAHNAWAKE, Que. — A blockade in the Mohawk territory of Kahnawake that halted rail traffic south of Montreal for more than three weeks came to a peaceful end on Thursday as activists voluntarily dismantled their camp next to Canadian Pacific Railway tracks.

Dozens of Mohawk community members sang and played drums as they walked behind a convoy of trucks and tractors flying Mohawk flags, which carried pallets, firewood and other supplies to a new location at the foot of a bridge leading to Montreal.

Traffic stretched for at least a kilometre in either direction as the procession temporarily stopped in the middle of the highway for a brief press conference.

"Our decision is to relocate our fire to the green space in Kahnawake, away from the railway tracks," Roxann Whitebean told reporters. "We want the fire to be visible for every commuter that crosses the Mercier Bridge to show that we are here to stay for as long as the Wet'suwet'en need us to."

The Kahnawake blockade was the last major rail disruption remaining from a wave of solidarity protests that sprung up across the country last month in support of Wet'suwet'en hereditary chiefs in northern British Columbia. The movement arose after the RCMP moved into Wet'suwet'en territory on Feb. 6 to enforce an injunction against a blockade erected by pipeline opponents.

Later Thursday, protesters in the Mi’kmaq community of Listuguj removed a blockade of a rail line operated by the Chemin de fer de la Gaspesie. The blockade, about 525 kilometres northeast of Quebec City, had been in place since Feb 10.

Quebec Premier Francois Legault wrote on Twitter that he was satisfied the two blockades had "finally" been lifted.

"The negative effects that the blockades have had, primarily on public transport users and on the economy, are deplorable," he wrote. "Solutions need to be found so this doesn't happen again."

The Mohawk Council of Kahnawake praised the dedication of the protesters and said the action was a sincere and peaceful expression of support for the hereditary chiefs in B.C.

"I think everybody — all sides — are happy that this has happened. It took a while, but people have to realize that our processes aren't always as fast as others," said Joe Delaronde, a spokesman for the council. "What's done is done, the solidarity remains, but the tracks are open and everyone is happy about that."

A statement from the Mohawk longhouse, distributed by the protesters, called the removal of the blockade a gesture of good faith as the Wet'suwet'en people consider a draft agreement reached Sunday between their hereditary chiefs and senior Canadian officials.

"We want to allow the Wet'suwet'en to take the necessary time within their own community to make decisions," added Whitebean, whose Mohawk name is Karonhiarokwas. "Let this be a strong message and demonstration of good faith to all of Canada. We prefer a peaceful resolution and demand that Indigenous peoples' rights be respected."

However, she warned that the Mohawks were prepared to take further action in the future if the situation is not resolved satisfactorily.

"Depending on how Canada moves forward, we are ready to react, and we will ensure our rights and lands will no longer be violated," she said.

"We will not back down until these standards are met."

Commuter and freight traffic along the line has been stopped since early February, forcing transit users to shuttle back and forth to Montreal by bus. CP Rail obtained a court injunction on Feb. 25 to end the blockade, but local Peacekeepers said they would not enforce it and provincial police made no effort to enter the community.

Legault sparked an angry response from the protesters and elected officials in Kahnawake last week when he said the reason provincial police were reluctant to intervene was because of the presence of assault rifles in the community.

On Thursday morning, there were signs the blockade was drawing to an end. Pickup trucks, some pulling flatbed trailers, could be seen driving along the access road to the camp, which was guarded by concrete barriers, piles of rubble and a structure built of poles where Mohawk community members stood watch day and night.

A spokeswoman for Exo, the commuter rail operator, said service will not resume until CP Rail has authorized use of the track.