Candidates down to the wire to enter Conservative leadership contest

OTTAWA — Rudy Husny scrambled up and down the stairs of the House of Commons Wednesday, thrusting his nomination papers for the Conservative leadership in front of one party member after another as he hustled to collect enough names to enter the cont
0
Feb 26, 2020 2:42 PM By: Canadian Press 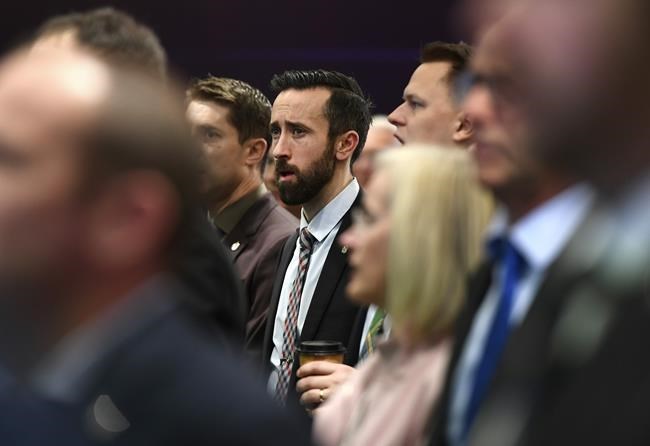 OTTAWA — Rudy Husny scrambled up and down the stairs of the House of Commons Wednesday, thrusting his nomination papers for the Conservative leadership in front of one party member after another as he hustled to collect enough names to enter the contest.

With Thursday the deadline to register, Husny is among those racing to submit the first $25,000 needed to run, along with the first set of signatures — from 1,000 people, spread across 30 ridings in seven provinces and territories.

But with the party verifying each name, and rejecting dozens from most campaigns as unqualified to support the bids, Husny is aiming to hand the party more than required to ensure he gets in.

"I'm making sure I've got it all," he said as he scurried off to buttonhole someone else on Parliament Hill.

Ahead of them are two others: former cabinet ministers Peter MacKay and Erin O'Toole. They've moved from the first stage to the second by laying down a further $25,000 of the registration fee, a full $100,000 refundable compliance deposit, and another 1,000 signatures, making them "authorized contestants."

What that gives them is the party's coveted membership list, so they can start contacting existing members to solicit support and money.

Those who hit those benchmarks must also participate in two official debates. The party announced Wednesday there will be an English-language debate in Toronto on April 17 and a French one on April 23 in Montreal.

The date takes into account the March 25 deadline, said Dan Nowlan, one of the two chairs of the party's leadership organizing committee.

"The decision to hold the debates at this point of the race means candidates appearing on the stage are actually those that will appear on the ballot," he said.

"It is meaningful to ordinary members, people who write cheques and who are deciding who to support," Trost said.

"This will mean someone is an official candidate, and that sends a signal."

Getting the first batch of signatures, the money and the application in by Thursday is no guarantee a candidate will be approved. In addition to vetting the signatures, the party's organizing committee reserves the right to interview applicants and reject their candidacies.

Richard Decarie, a Quebec candidate strongly opposed to abortion and same-sex marriage, is still waiting on his interview though has submitted the initial materials, Trost said.

There have been calls for the party to bar Decarie from running.

Current leader Andrew Scheer's opposition to abortion and unclear stance on same-sex marriage were perceived as liabilities in the last federal election, though he never really discussed in detail his beliefs and said he wouldn't support any legislation restricting either.

Decarie, on the other hand, has said he would defund abortion and restore the "traditional" definition of marriage as being between a man and a woman. His comments, including his position that being LGBTQ is a choice, have been condemned by prominent members of the party.

Sloan holds similar views; he said last month the science isn't clear on whether being gay is a choice. The party approved his application this week.

Quebec movie-theatre mogul Vincenzo Guzzo, who also appears on the reality TV show "Dragons' Den," said he's got the application materials in hand but is thinking over whether he's going to hand them in.

He said he's not sure the race is set up to accommodate relative political outsiders, nor whether he can adjust his business interests accordingly, considering the tight timelines.

"Whether I decide to run or not, one thing is for sure," Guzzo said.

Party members are to elect a new leader on June 27.

N.S. woman describes struggles of a beloved father on ventilator with COVID-19
Mar 30, 2020 5:44 PM
Comments
We welcome your feedback and encourage you to share your thoughts on this story. We ask that you be respectful of others and their points of view, refrain from personal attacks and stay on topic. To learn about our commenting policies and how we moderate, please read our Community Guidelines.