OTTAWA — Canada has obtained an agreement to allow greater family and consular access for Michael Spavor and Michael Kovrig, the two Canadians detained for more than two years in China.
Jan 13, 2021 6:34 PM By: Canadian Press 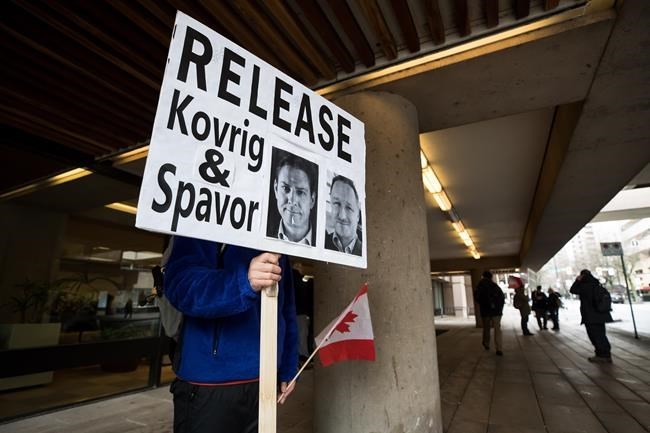 OTTAWA — Canada has obtained an agreement to allow greater family and consular access for Michael Spavor and Michael Kovrig, the two Canadians detained for more than two years in China.

A spokesperson for Foreign Affairs Minister Marc Garneau says the agreement was reached "over the past months."

Syrine Khoury did not elaborate.

The government has pushed for increased consular access to the two Michaels but this is the first time it has mentioned access for the men's families.

The two were arbitrarily detained in December 2018 in apparent retaliation for Canada's arrest of Huawei executive Meng Wanzhou on an extradition request from the United States.

Khoury confirmed that Canada granted travel exemptions late last year to Meng's husband and two children to visit her in Vancouver, where she awaits an extradition hearing.

She did not say if that was part of the agreement reached to allow more family access for Kovrig and Spavor.

"As in all cases, this decision was made in accordance with Canadian laws and in strict compliance with the current travel OiCs (orders in council)."

"The arbitrary detention of Michael Kovrig and Michael Spavor is unacceptable.  We continue to call for their immediate release," she added.

"Over the past months, Canada has obtained agreements involving increased family and consular access for Michael Kovrig and Michael Spavor.”

Conservative immigration critic Raquel Dancho blasted the travel exemptions for Meng's family when Canadians are being told to avoid all non-essential travel and have been prohibited from reuniting with family abroad amid efforts to curb the wildfire spread of COVID-19.

“This is an insult to the millions of Canadians who were told by this government not to visit loved ones," Dancho said in a statement.

“The Liberal government broke their promise to Canadians and their families abroad who have been separated for nearly a year and unable to reunite because of the slow, uncompassionate family reunification process they put in place."

Meanwhile, Dancho noted, Spavor and Kovrig "have been denied basic human rights and detained in communist Chinese prisons for over two years, with limited access to their families and consular support."

This report by The Canadian Press was first published Jan. 13, 2021.

Poll finds strong support for COVID-19 curfews despite doubts about effectiveness
Jan 19, 2021 4:35 AM