OTTAWA — Cosmetics company Lush has launched a campaign calling on Canadians to pressure Parliament to back out of an agreement with the U.S. governing refugee claims.
Mar 5, 2020 1:18 PM By: Canadian Press 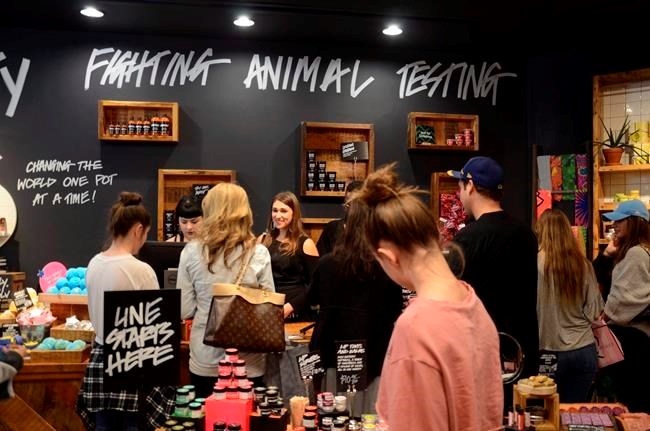 OTTAWA — Cosmetics company Lush has launched a campaign calling on Canadians to pressure Parliament to back out of an agreement with the U.S. governing refugee claims.

It's part of the company's broader effort to draw attention to the impact of major changes to U.S. immigration policy, and with their North American headquarters in Vancouver, Lush says they are adding the Canadian angle because of the Safe Third Country Agreement.

The deal largely bans people from seeking asylum at the Canada-U.S. border, on the grounds that both countries are safe and so people must seek refuge where they first arrive.

But Lush argues that increased immigration enforcement, the separation of families at the Mexican border and a sharp reduction in refugee admissions effectively mean the U.S. isn't safe.

"In upholding the STCA, Canada is complicit in the U.S. administration's efforts to dismantle vital protections for refugees and undermines Canada's dedication to human rights," the company writes in a statement accompanying their Freedom of Movement campaign launched this week.

In the U.S., Lush stores are being declared safe havens from immigration enforcement and staff will talk to customers about the issue. The public education element carries over to Canadian stores, where customers are also being encouraged to text members of Parliament with a plea to scrap the agreement.

The campaign follows calls from immigration and refugee advocacy groups, lawyers, academics and some politicians for Canada to figure a way out of the deal, though not all opposition turns on current U.S. policy.

The agreement means people who show up at a regulated land border crossing to request asylum are turned away, with few exceptions.

But, while crossing into a country without passing through a border checkpoint is illegal, people who do so in order to seek asylum can't be prosecuted for the crime.

So, 54,739 have crossed into Canada from the U.S. since 2017, at spots in the border with no checkpoints, specifically to avoid being subject to the agreement so they can file an asylum claim.

The loophole has led to calls for the deal to be amended or scrapped so the flow of asylum seekers is stopped. Others argue the way forward would be to just allow people to claim asylum at land border points rather than make risky crossings.

Immigration Minister Marco Mendicino has been tasked with "modernizing" the agreement, but with the U.S. in an election year, that's unlikely to happen soon.

Canadian companies have engaged in domestic immigration policy before. Many took roles to promote the 2015-2016 marquee government program to resettle more than 40,000 Syrian refugees. Canadian businesses are often at the forefront of calls to increase immigration admissions to fill empty jobs.

Carleen Pickard, ethical campaigns specialist for Lush, said a decision to weigh into the politically charged debate around the effects of U.S. immigration policy stemmed from Canadians expressing a desire to do something in response.

"So why do we continue to hold the United States as a safe country is a question we wanted to bring to customers, and an action point we know we could give them."

Lush has a history of advocacy efforts in Canada and globally. Among other things, the company closed down its stores during countrywide climate strikes in September to encourage staff and customers to participate.

This report by The Canadian Press was first published Mar. 5, 2020.