Easing restrictions and rage in the streets; In The News for June 1 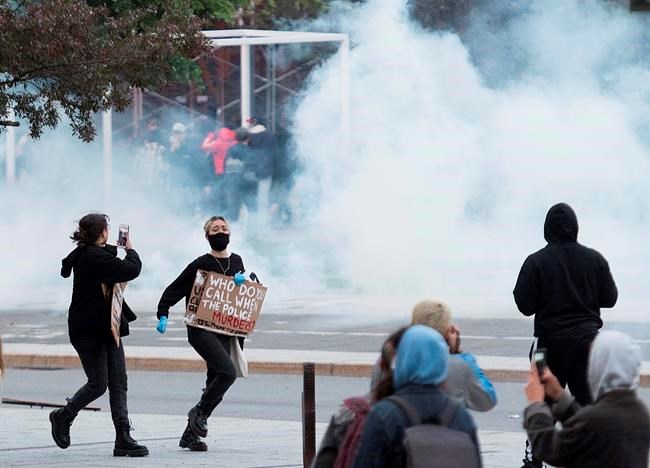 In The News is a roundup of stories from The Canadian Press designed to kickstart your day. Here is what's on the radar of our editors for the morning of June 1 ...

Some provinces are moving today to loosen more restrictions intended to slow the spread of the pandemic.

British Columbia is giving parents the option of sending their children back to school on a part-time basis.

Manitoba is easing a raft of restrictions, including its ban on people visiting loved ones in personal care homes, though safeguards such as screening visitors and maintaining physical distancing will apply.

Film productions are being allowed to resume and a ban on non-essential travel to the province's north is being eased.

In Ontario Drive-in movie theatres and batting cages were allowed to reopen Sunday, and today campers can return to provincial parks, with certain stipulations.

Meanwhile, PEI is allowing in-house dining at restaurants as well as the reopening of child-care centres and libraries. Also allowed now are outdoor visits with residents at long-term care homes, certain recreational and sporting activities and gatherings of up to 15 people indoors and 20 outdoors.

MONTREAL — A Montreal anti-racism protest demanding justice for a black Minnesota man who died following a police intervention last week degenerated into clashes between police and some demonstrators on Sunday night.

The march had snaked its way through downtown Montreal on Sunday afternoon without incident, but police declared the gathering illegal about three hours after it began when they say projectiles were thrown at officers who responded with pepper spray and tear gas.

Tensions flared after the formal rally had concluded. Windows were smashed, fires were set and the situation slid into a game of cat-and-mouse between pockets of protesters and police trying to disperse them.

Demonstrators had gathered to denounce racist violence and police impunity — both in the U.S. and at home in Montreal.

George Floyd died in Minneapolis on Monday after pleading for air while a white police officer pressed a knee on his neck. His death has sparked nightly protests in major U.S. cities.

The Montreal rally followed one in Toronto on Saturday, which remained peaceful. So too did Sunday's rally in Vancouver, where thousands gathered outside the city's art gallery, waving signs and chanting their support of the Black Lives Matter movement and Floyd.

In the United States ...

Another night of unfettered fury, random violence and hardline police tactics unfurled itself Sunday in the United States under clouds of tear gas, pepper spray and smoke from street fires — all of it sparked by the latest death of a black man while in police custody.

In front of the White House, protesters clashed yet again with a massive front line of police, Secret Service agents and Park Police officers in a back-and-forth hail of bricks, rocks, rubber bullets and gas canisters, a massive bonfire raging in the middle of the street.

And in Minneapolis, where George Floyd died on the street Monday with his throat pressed under the knee of one of his arresting officers, a tanker truck barrelled through a crowd of demonstrators gathered on a closed highway, apparently in an act of provocation that somehow didn't cause any injuries.

Several thousand people marched in New Zealand's largest city on Monday to protest the killing of George Floyd in the U.S. as well as to stand up against police violence and racism in their own country.

Many people around the world have watched with growing unease at the civil unrest in the U.S. after the latest in a series of police killings of black men and women. Floyd died on May 25 in Minneapolis after a white police officer pressed his knee on Floyd's neck until he stopped breathing. The officer was fired and charged with murder.

In Iran, which has in the recent past violently put down nationwide demonstrations by killing hundreds, arresting thousands and disrupting internet access to the outside world, state television has repeatedly aired images of the U.S. unrest.

At a gathering in central London on Sunday, thousands offered support for American demonstrators, chanting "No justice! No peace!" and waving placards with the words "How many more?"

In Brazil, hundreds of people protested crimes committed by the police against black people in Rio de Janeiro's working-class , known as favelas. Police used tear gas to disperse them, with some demonstrators saying "I can't breathe," repeating Floyd's own words.

NEW YORK — Major League Baseball players ignored claims by clubs that they need to take additional pay cuts, instead proposing they receive a far higher percentage of salaries and a commit to a longer schedule as part of a counteroffer to start the coronavirus-delayed season.

Players proposed a 114-game regular season Sunday, up from 82 in management's offer, a person familiar with the plan told The Associated Press. Done that way, the World Series could extend past Thanksgiving.

The person spoke on condition of anonymity because no details were announced.

Opening day would be June 30 and the regular season would end Oct. 31, nearly five weeks after the Sept. 27 conclusion that MLB's proposal stuck to from the season's original schedule. The union offered scheduling flexibility to include more doubleheaders as baseball crams the games into 123 days, leaving little room for days off.

MLB's proposal Tuesday would lower 2020 salaries from about $4 billion to approximately $1.2 billion. The union's offer would have salaries total about $2.8 billion.

This report by The Canadian Press was first published June 1, 2020

Non-essential travel ban would violate Constitution but courts might allow it: expert
Jan 23, 2021 4:00 AM