OTTAWA — Environment Minister Jonathan Wilkinson says he plans to move quickly this fall to set legislated targets to cut Canada's greenhouse gas emissions that go even further than what has already been promised.
Sep 24, 2020 1:57 PM By: Canadian Press 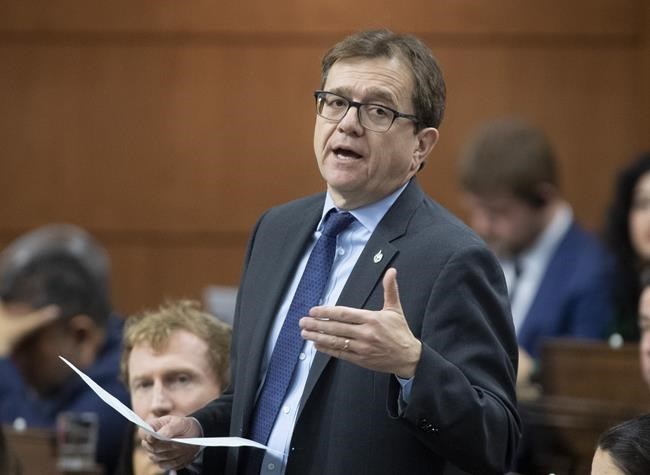 OTTAWA — Environment Minister Jonathan Wilkinson says he plans to move quickly this fall to set legislated targets to cut Canada's greenhouse gas emissions that go even further than what has already been promised.

Wilkinson told The Canadian Press in an interview this week that COVID-19 is a priority but that Canada cannot take its eye off the ball when it comes to climate change.

"While COVID is certainly a threat to the health and safety of Canadians and to our economic recovery, the crisis that is climate change, if left unaddressed, will have impacts that are even more significant than COVID-19," he said.

"We need to elevate our level of ambition and our urgency with which we are addressing the carbon issue."

The Liberals promised during the 2019 election that they would be aiming to cut more greenhouse gas emissions by 2030 than was promised in the Paris climate accord, and will bring in a law to set five-year targets for curbing emissions all the way to 2050, when the goal is to be at net zero.

That means Canada needs to curb its emissions drastically over three decades and ensure any greenhouse gases still being produced can be absorbed rather than remain in the atmosphere.

That legislation has never materialized, and plans for it got delayed by the pandemic. So did many other facets of the Liberals' environment platform, from promises to plant two billion new trees to bringing in new standards for cleaner-burning fuels.

In the spring, Wilkinson was not sure when the new target or enforcement legislation would come, but he said this week it is on the top of his to-do list.

"It is, from my perspective, the highest priority from a legislative perspective for me as the minister of environment and climate change," he said. "We fully intend to move ahead with that once the house is back in session. I think you will see that certainly within the coming few months."

The government was to have the new targets in place in time for the annual meeting of the United Nations climate conference this fall, but the pandemic put that event off by a year.

The legislated targets are to be legally binding, though it is not clear how they would be enforced. The United Kingdom has a similar type of law.

Canada has set multiple targets for curbing emissions over the last three decades and has never met a single one of them, including the one that said by 2020, Canada would be emitting 17 per cent less than it was in 2005.

The most recent national inventory report on greenhouse gas emissions, which is for 2018, shows Canada emitted almost the same that year as it did in 2005, and will most likely miss the 2020 target by more than 100 million tonnes, which is more than is emitted to heat and power the entire country.

It also missed its 2012 target under the Kyoto accord by more than 100 million tonnes.

With its current policies, Canada will miss the Paris target by more than 70 million tonnes in 2030.

This report by The Canadian Press was first published Sept. 24, 2020.