HALIFAX — The mother of a man who died in a Halifax police jail cell in June 2016 asked a judge Wednesday to impose the "strictest penalty possible" on two special police constables found guilty of criminal negligence in his death.
Aug 12, 2020 1:46 PM By: Canadian Press 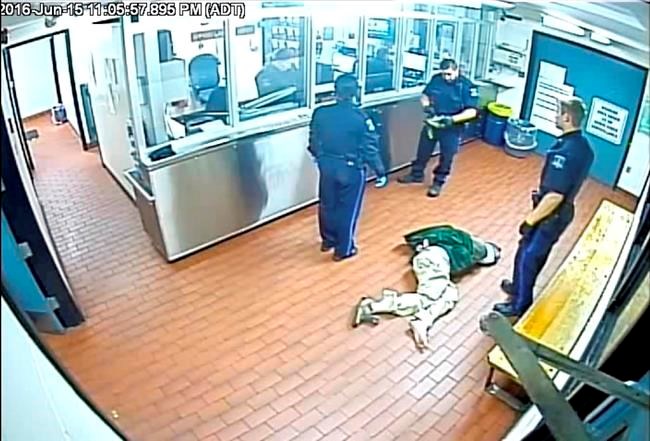 HALIFAX — The mother of a man who died in a Halifax police jail cell in June 2016 asked a judge Wednesday to impose the "strictest penalty possible" on two special police constables found guilty of criminal negligence in his death.

In her victim impact statement during a sentencing hearing in Nova Scotia Supreme Court, Jeannette Rogers said she is seeking a strict penalty because living every day without her son is like a "life sentence without the possibility of parole."

A medical examiner determined Corey Rogers, who was intoxicated, died of suffocation on June 16, 2016, while lying in a narrow individual cell with a spit hood covering his mouth as he appeared to be vomiting.

"Two hours — that's how long my son lay on the floor of the cell alone, deceased with a covering over his head," Rogers told the court. "How can that happen when the policy of the Halifax police department is to do 15-minute rousability checks on every prisoner?"

Daniel Fraser and Cheryl Gardner were found guilty by a jury in November of criminal negligence causing death. Rogers addressed both of them directly Wednesday in the courtroom.

"Maybe the name of your prisoner-care facility should be changed to 'we don't care facility' because there certainly was no care given to Corey that night," she said. "Because you both decided not to do your jobs that night my son is dead."

Rogers said her son would have been better off in the drunk tank where at least one of the other detainees could have taken the hood off when they noticed he had vomited into it. "If you could take just one day, hour, or minute of my grief I would gladly exchange it for whatever your sentence will be."

Crown attorney Chris Vanderhooft asked the judge for two-year prison sentences for Fraser and Gardner. He said both failed in their duty of care by not seeking medical attention for Rogers and the sentence should reflect the principles of "denunciation and deterrence."

Vanderhooft said Rogers, who was an alcoholic, was vulnerable the night he died and was treated "in the worse way by the state."

Special constables are appointed as peace officers by the police department for specialized duties such as booking prisoners, but they are not considered police officers. Vanderhooft said that distinction shouldn't be made in this case.

"The clear authority given to special constables in the acceptance of prisoners into their care ... places them, once they take a prisoner, in the highest position of trust," he said. "They now have the life and safety of that prisoner on their watch."

During the trial, the jury was shown video of Rogers, 41, heaving in a cell while wearing the spit hood. The mask prevents prisoners from spitting on guards, but also comes with instructions warning against leaving it on a highly intoxicated person who may vomit.

In their submissions to the court, Fraser and Gardner's defence lawyers called for a suspended sentence, arguing their clients were not properly trained by the police department in the use of spit hoods and also lacked the "tools" to properly assess the medical needs of prisoners.

Gardner's defence lawyer, Ron Pizzo, said it was "manifestly unfair to hold someone to a higher standard when they haven't been given what they need to discharge that standard."

Both defendants addressed the court briefly Wednesday, expressing remorse for what happened.

"I'm deeply sorry for how this has affected the family," said Gardner. "If I'd known then what I know now things would have been different."

Fraser said through his job he had gotten to know Rogers for quite a while and "had nothing against him."

"Knowing what I knew that night with my training, with my experience, I can't think of anything I would have done differently," Fraser said. "In hindsight of course, I look back and see things that could have been done differently."

Justice Kevin Coady reserved his decision on sentencing until Monday.

Hours before his death, Rogers was arrested outside a Halifax hospital where his wife had given birth to their child the day before.

Evidence was presented during the trial indicating he was extremely impaired after rapidly drinking half a bottle of whisky and that police saw him consume the liquor.

The arresting officers testified they placed the hood on Rogers' face after he was spitting in the police car on the way to the station.