EDMONTON — Lyle Massie takes his bright-orange motorcycle out for a ride around the city once or twice a week. The Edmontonian says he's noticed way more speeding on the roads since the COVID-19 pandemic hit in March.
May 30, 2020 7:00 AM By: Canadian Press 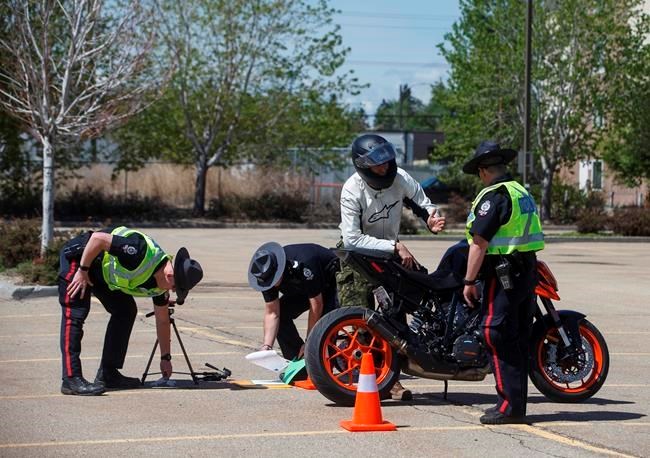 EDMONTON — Lyle Massie takes his bright-orange motorcycle out for a ride around the city once or twice a week.

The Edmontonian says he's noticed way more speeding on the roads since the COVID-19 pandemic hit in March.

"One hundred per cent," he said in an interview. "In the early days of COVID-19, there was less traffic and a lot more speed."

Massie, who attended a police event Thursday to gauge his motorcycle's noise level, said he's seen drivers racing up and down boulevards or showing off in their muscle cars.

Police across the country say they've been dealing with more complaints about loud, fast vehicles and have issued more tickets for excessive speeding on city streets and provincial highways this year.

"Some Edmonton drivers seem to feel that lower traffic volumes are an excuse to speed. But the reality is speed is a key risk factor in collisions," Sgt. Kerry Bates, who's with the Edmonton Police Service's traffic section, said earlier this spring.

"The faster a vehicle is travelling, the greater the chance of injury or death in the event of a collision."

In particular, he said, there's been more extreme speeding.

Bates said officers issued more than a dozen tickets to drivers exceeding a posted speed limit by 40 km/h or more in a two-week period.

Two of those drivers were going 100 km/h and 110 km/h as they passed a police vehicle with its emergency lights activated — a situation where drivers are required to slow down to 60 km/h. A third driver was speeding through a 50-km/h-construction zone with workers at 119 km/h.

There have been other instances throughout April and May.

In southern Alberta, Cochrane RCMP stopped two drivers going 199 km/h in a 110-km/h-zone. Both drivers, two men in their 20s, were charged with speeding.

Officers in Saskatchewan have charged drivers and seized their vehicles for excessive speeding.

Near Selkirk, Man., last month, officers were observing a group of motorcycles travelling at high speeds when one started to pull away.

In that case, a 50-year old Winnipeg man was charged for speeding and dangerous driving. An officer also issued him a notice for a licence review.

The same officer then clocked a vehicle at 150 km/h in the same area and charged a 17-year-old girl with speeding. She was also sent for a licence review.

Several police departments have begun cracking down on traffic violations in the last month.

In Ontario, York Regional Police charged 30 drivers and impounded their vehicles on the May long weekend after they were caught driving more than 50 km/h over the speed limit.

Peel Regional Police have begun an education and enforcement program after seeing an increase in racing.

"Street racing is an illegal and dangerous activity that jeopardizes the lives of innocent people," they said in a news release this week.

Back in Edmonton, police are targeting traffic-related noise and speeding in the coming weeks.

"On a lot of occasions, speed and noise go together," Bates said.

Noise complaints this year have gone up — probably because people working from home are noticing — and speeding is up about 20 per cent on average, he said.

Some motorcyclists are concerned about speedsters as well.

"Riding a bike on city streets, you have to be so hyper aware," said Zoltan Kenwell. "For me, it just means I check my mirrors a bit more ... to see how fast they are coming up on you."

This report by The Canadian Press was first published May 30, 2020