Prince Charles tests positive and a pandemic message ; In The News for March 26 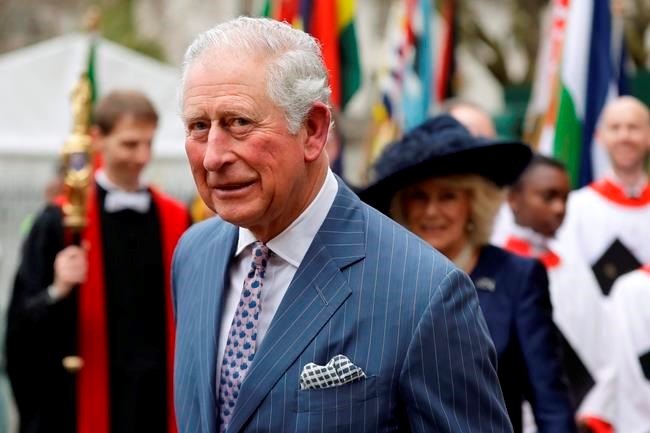 In The News is a roundup of stories from The Canadian Press designed to kickstart your day. Here is what's on the radar of our editors for the morning of March 26 ...

Prime Minister Justin Trudeau will confer today with leaders of the world's biggest economies about the global impact of the COVID-19 pandemic.

He'll be taking part in an video conference with leaders of the G20, who are expected to talk about co-ordination of international efforts to contain the deadly virus and cushion the devastating blow to the world's economy.

He's also expected to use his daily news conference outside his residence, where he continues in self-isolation after his wife was diagnosed with COVID-19, to highlight the billions worth of direct financial aid the federal government is providing to help Canadians and businesses weather the crisis.

Legislation enacting $52 billion worth of financial aid and another $55 billion worth of tax deferrals was approved Wednesday by Parliament but the money won't actually start flowing for another few weeks.

The government is hoping to start delivering the Canada Emergency Response Benefit — $2,000 per month for up to four months for anyone left without income due to the pandemic — by April 6.

COVID-19 could soon "explode" within Toronto's homeless population as government actions to curb the spread of the illness have the opposite effect on those who live without housing, advocates and front-line workers say.

People who work with the city's homeless say more are on the streets because many drop-in and respite sites have closed, while others must limit their numbers inside. Meanwhile, clients cannot practise safe social distancing inside those sites, nor can they easily go the bathroom or wash their hands because many food banks, restaurants and coffee shops have shut.

Downtown Toronto, where many of the services for the homeless exist, is barren. With coffee shops and restaurants largely closed, grocery stores have become the main source of food, said Greg Cook, an outreach worker with Sanctuary Ministries Toronto.

President Donald Trump's "beautiful" idea to reopen the U.S. economy by Easter Sunday and pack church pews that day was dreamed up during a conference call among business leaders desperate to get the country back up and running.

But his target date for easing coronavirus restrictions is another outstretched hand to a group he has long courted: evangelical Christians.

Cooped up at the White House and watching the stock market tumble, Trump had already been eager to ease federal guidelines aimed at halting the spread of a virus that has infected more than 55,000 Americans when about a dozen business leaders convened a conference call on Sunday.

"There was a concern — not unanimity, but consensus — that you had to have a reopening of the economy at some point soon," said Stephen Moore, a conservative economist and informal Trump adviser. On the call, Moore said, he argued in of setting a specific date as a goal by which point the economy could gradually begin to be reopened.

"One of the things we were saying was that this would some confidence in people, that there would be some kind of light at the end of the tunnel," he said.

Prince Charles, the heir to the British throne, has tested positive for the new coronavirus, his office said Wednesday.

The 71-year-old is showing mild symptoms of COVID-19 and is self-isolating at a royal estate in Scotland, his Clarence House office said.

It says his wife Camilla, 72, has tested negative.

"The Prince of Wales has tested positive for Coronavirus,'' Clarence House said. "He has been displaying mild symptoms but otherwise remains in good health and has been working from home throughout the last few days as usual.''

Britain's Press Association, citing a source, said the prince and the duchess remained in good spirits, and that Charles was not bedridden.

The tests were carried out by the National Health Service in Scotland.

"It is not possible to ascertain from whom the prince caught the virus owing to the high number of engagements he carried out in his public role during recent weeks," the statement said.

Buckingham Palace said Queen Elizabeth II, 93, remains at her home in Windsor with the 98-year-old Duke of Edinburgh.

Picture it: A plague has broken out, resulting in border closures, xenophobia, paranoia and denial of facts.

Only in this case it's a zombie outbreak, and it's infecting non-Indigenous people outside a fictional First Nations reserve that's immune to the virus.

Mi'gmaq filmmaker Jeff Barnaby says he didn't intend on making a timely pandemic movie when he wrote and directed that very scenario in the new Canadian thriller "Blood Quantum."

The film was supposed to hit theatres this Friday, but in an eerie twist of fate, its theatrical release is now postponed due to the COVID-19 crisis.

Rather, Barnaby says he was reflecting on how "we've seen all of this play out before," with outbreaks including the influenza epidemic of 1918-19.

"It was more about the societal effect of what a pandemic does to people — it makes them paranoid, it makes them xenophobic," Barnaby said in a recent phone interview from his Montreal home.

This report by The Canadian Press was first published March 26, 2020.