VICTORIA — Dozens of Indigenous youth and their supporters packed blankets and tarps Thursday, ending a 17-day protest at British Columbia's legislature that saw a fire burning constantly at the front steps and people camping overnight at the buildin
Mar 5, 2020 2:03 PM By: Canadian Press 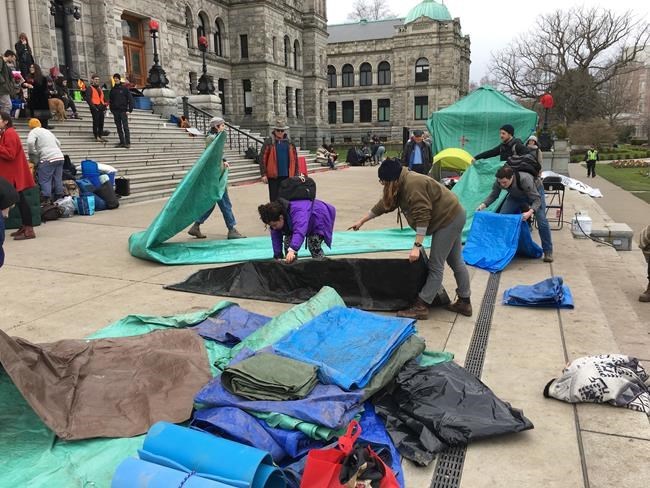 VICTORIA — Dozens of Indigenous youth and their supporters packed blankets and tarps Thursday, ending a 17-day protest at British Columbia's legislature that saw a fire burning constantly at the front steps and people camping overnight at the building's ceremonial gates.

The conclusion of the protest followed the arrests of five people who refused to leave the building Wednesday night after meeting with Scott Fraser, B.C.'s minister of Indigenous relations and reconciliation.

Ta'Kaiya Blaney said the Indigenous youth are leaving the legislature but their movement for the rights of Aboriginal Peoples continues. She said the protest to support Wet'suwet'en hereditary chiefs in northwest B.C. who oppose a natural gas pipeline through their traditional territories was successful.

"The Indigenous youth are coming together in ways that go beyond the pipeline," said Blaney. "It's about Indigenous sovereignty and it's about affirming for our young people that we can take our power back."

She said the youth leaders decided to stay inside the legislature building Wednesday night because Fraser would not commit to stopping the Coastal GasLink pipeline opposed by the Wet'suwet'en hereditary chiefs.

"Our demands have always been that Coastal GasLink be removed from Wet'suwet'en sovereign land and that a good faith relationship with Wet'suwet'en people cannot take place while that industry and that pipeline construction is happening without consent," said Blaney.

Coastal GasLink is building a natural gas pipeline from Dawson Creek to Kitimat. It is part of a $40 billion liquefied natural gas export project in Kitimat.

Fraser said he was disappointed the meeting with Indigenous youth leaders resulted in arrests.

He said he invited the youth leaders into the legislature as a gesture of goodwill to discuss ongoing deliberations with the West'suwet'en.

Outside the legislature on Thursday, Fraser said the meeting lasted 90 minutes, twice as long as it was scheduled.

"They ended in a good way, I thought," he added.

The minister said he believed his offer of respectful talks would conclude with the youth leaving the building in an orderly manner.

"It is the basis for the work we have done with the hereditary chiefs and I thought that would be reciprocated," Fraser said. "I found in my time as minister that by providing that respect it is usually reciprocated, and I'm very disappointed it was not."

During a testy question period, Premier John Horgan said the arrests and ongoing Indigenous rights protests across Canada are marking a tumultuous time in Canadian history. He urged the Opposition to work with the government to resolve Indigenous issues rather than point fingers.

"We agreed in November as a unit, every member of this house, to work towards genuine reconciliation," said Horgan, referring to the unanimous adoption of the United Nations Declaration for the Rights of Indigenous Peoples.

"That's what we're trying to do," he said. "Is the mob outside helpful? I would suggest not."

Blaney called the premier's comments about a mob "irresponsible."

Victoria police said five people were taken into custody at about 9 p.m. Wednesday and each faces a charge of mischief. They were released on conditions that they stay away from the legislature grounds and a surrounding park.

Police said there were no injuries in the arrests and they alleged the protesters called for others to surround the legislature building.

They said officers were "actively obstructed" and because of the size of the crowd, it took several hours for the protesters to be safely transported to police headquarters.

"Officers who were responding to the scene were surrounded by over 100 protesters and were unable to respond to emergency calls for service," police said in a news release.