NOTRE-DAME-DE-STANBRIDGE, Que. — A 38-year-old Quebec man was charged with criminal negligence Thursday after three young children were killed and seven people were injured when they were thrown from the front loader of a tractor.
Jul 3, 2020 10:05 AM By: Canadian Press 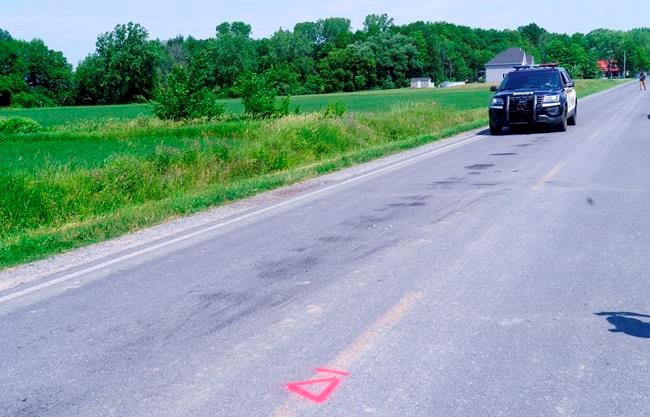 NOTRE-DAME-DE-STANBRIDGE, Que. — A 38-year-old Quebec man was charged with criminal negligence Thursday after three young children were killed and seven people were injured when they were thrown from the front loader of a tractor.

Six children and four adults were riding in the loader of the tractor Wednesday evening when the accident occurred on a country road in the small town of Notre-Dame-de-Stanbridge, about 55 kilometres southeast of Montreal.

The three victims were aged five and under, and three other children suffered serious injuries, but their lives were not believed to be in danger.

Provincial police said among the four adults who were in the loader, two were in hospital in critical condition while the other two escaped with minor injuries.

The suspect was released with conditions.

Police initially said alcohol could have been a factor in the accident. But Crown prosecutor Veronique Gauthier told reporters Thursday that the suspect will not be charged with alcohol-related crimes.

"We looked at the evidence, and for now, that's the only count that we could go for," she said, referring to criminal negligence.

On Thursday morning, skid marks and faded bloodstains were visible on the pavement of Rang Sainte-Anne, the quiet rural road where the incident happened. A Quebec provincial police car was stationed in front of a grey house with a red tin roof.

Several pieces of heavy farm machinery, including tractors, could be seen parked next to the fields adjacent to the house. A hockey net and a children's play set sat in the backyard.

Luc Perreault, who lives nearby, said he heard police sirens racing through the village just after 7 p.m. and rushed to the end of the road to see what was happening.

While he said he didn't know the family, Perreault said he believed the event was likely a family celebration.

"A Canada Day that just turned terrible," he said.

Provincial police said a farm tractor was carrying 10 people inside its front loader, along with pieces of wood. Police spokeswoman Anik Lamirande said that for unknown reasons, all the occupants were suddenly thrown from the loader shortly before 7 p.m.

She could not say if the 10 people were related.

Perreault said it's rare but not unheard of for people to ride in the loader of a tractor. "We used to do that when we were kids, you know, with grandpa's old tractor sometimes, get in the bucket," he said. "But not to that magnitude, so many people."

He said the small community of fewer than 700 people is devastated.

"Nobody is smiling this morning," he said. "It's three kids that are gone, two adults seriously hurt."

Daniel Tetreault, the town's mayor, said the entire community was saddened by the accident, which he said involved a local farming family.

While he said doesn't know the family well, Tetreault said they are hard-working people who raise crops.

"They're a good family, good people."

Lewis Smith, manager of national projects for the Canada Safety Council, said accidents involving children and heavy farm machinery are "more common than (they) should be."

He said it's easy for families to look at an incident like Wednesday's as an isolated tragedy that likely won't happen to them. That's the wrong approach, he said.

"Nobody ever goes out with the intent of having this happen," Smith said in an interview.

"It's unintentional, it's sudden, it's irreversible. When you're considering letting children climb into the bucket and driving them around for a bit, you have to stop and be mindful of whether you can live with the consequences."

This report by The Canadian Press was first published July 2, 2020.

— With files from Giuseppe Valiante

Next N.L. premier Furey a political newcomer but a familiar face in the province
Aug 3, 2020 3:22 PM
Comments
We welcome your feedback and encourage you to share your thoughts. We ask that you be respectful of others and their points of view, refrain from personal attacks and stay on topic. To learn about our commenting policies and how we moderate, please read our Community Guidelines.