OTTAWA — The litany of racial slurs inserted into the comments section of an online Conservative leadership debate Wednesday was not surprising, candidate Leslyn Lewis said the next day. Lewis, Erin O'Toole and Derek Sloan were debating B.C.
Jul 9, 2020 2:51 PM By: Canadian Press 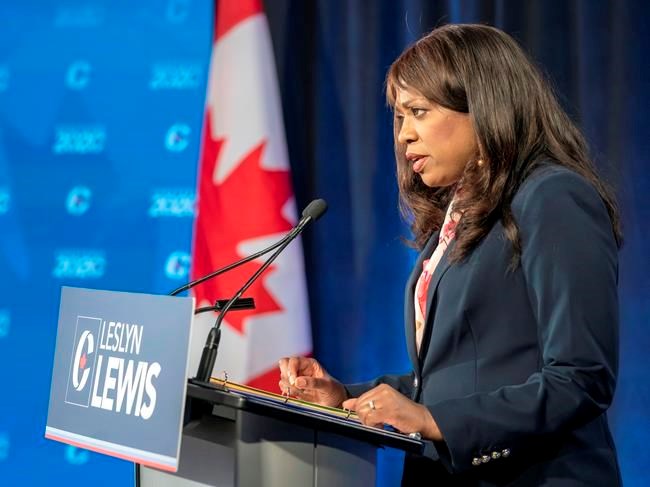 OTTAWA — The litany of racial slurs inserted into the comments section of an online Conservative leadership debate Wednesday was not surprising, candidate Leslyn Lewis said the next day.

Lewis, Erin O'Toole and Derek Sloan were debating B.C.-related issues when for nearly a minute, slurs started filling the chat box of the video conference program.

Lewis, who is the first Black candidate to run for the Conservative party leadership, said she saw them and then closed the chat screen so she could focus on the event.

"The racist comments during last night's debate which were directed at me, Black people and Jewish people were sadly not surprising," she said in a statement Thursday.

"This past week we saw much more blatant displays of antisemitism in Toronto, and it has not been an irregular occurrence for me to encounter racist individuals during this campaign."

A transcript of the debate chat provided to The Canadian Press by organizers suggests the racist slurs were one of several attempts by to hijack the discussion, with the other interjections seemingly nonsensical.

He said as the comments were noticed, moderators booted the user from the chat, but then a new one would pop up. Eventually, they disabled the chat function altogether.

"We are thankful to the hundreds of members in the chat who alerted us to these terrible comments and demanded swift action, which we took," he said.

Isidorou said some cursory research by the organizing team suggested there had been a plan prior to the event to disrupt it.

The link to join the online debate was widely circulated as the event was backed by all 42 riding associations in the province.

The racist comments weren't mentioned by the candidates or moderator during the event, but screenshots of them circulated online after they were removed.

Peter MacKay, who skipped the debate, later condemned the incident on social media, calling it "disgusting and totally unacceptable."

Hackers disrupting video conference calls have been a hazard as the software has exploded in use during the COVID-19 pandemic.

But Lewis' campaign said though the team has held hundreds of online sessions, they've only experienced a single other instance of someone attempting to disrupt the event, and in that one, the commentator was attacking Lewis for her gender.

Her campaign said her previous encounters with racism on the campaign trail have come in the form of social-media messages and direct correspondence.

In her statement, Lewis said the response from fellow Conservatives to the events of Wednesday night prove to her that racist behaviour is not acceptable in the party.

"I truly believe that together we will continue to make Canada a welcoming and safe place for all."

Voting is now underway in the race and the mail-in ballots are due back by Aug. 21, with a winner expected to be announced the week after.

The debate Wednesday night covered a range of regional topics, including a rise in crimes against Chinese-Canadians since the outbreak of the COVID-19 pandemic, which is believed to have originated in China.

Candidates were asked to address how they'd balance effective criticism of China while maintaining strong and positive outreach to the Chinese-Canadian community.

All three said they knew they had to be careful and watch their words, ensuring their concerns with China don't get translated to racism in Canada.

This report by The Canadian Press was first published July 9, 2020.

Search for missing ball python, one month after it slithered off near Victoria
Aug 4, 2020 4:19 PM
Comments
We welcome your feedback and encourage you to share your thoughts. We ask that you be respectful of others and their points of view, refrain from personal attacks and stay on topic. To learn about our commenting policies and how we moderate, please read our Community Guidelines.