WASHINGTON — Canada is taking a lead role in what Transport Minister Marc Garneau said Thursday he hopes will become an international effort to better protect civilian airliners around the world from being shot down over conflict zones.
Mar 5, 2020 12:01 PM By: Canadian Press 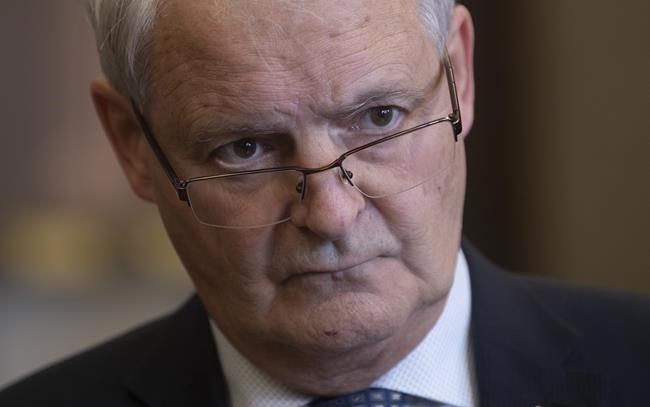 WASHINGTON — Canada is taking a lead role in what Transport Minister Marc Garneau said Thursday he hopes will become an international effort to better protect civilian airliners around the world from being shot down over conflict zones.

Garneau was in the U.S. capital to promote what he's calling the Strategy for Safer Skies — a Canadian-led multilateral effort to improve co-ordination, communication and intelligence-sharing between civil aviation agencies and airlines around the world.

"As a global community, we cannot add any more names to the list of lives that have been lost, of families whose lives have been turned upside down," Garneau told an audience of aviation executives, industry leaders and experts at a summit meeting hosted by the U.S. Chamber of Commerce.

"We must find ways to better manage civil aviation above conflict zones."

Canada has been seized with the issue ever since January, when — in the midst of Iran's ballistic-missile retaliation against Iraqi military bases housing U.S. soldiers for the targeted killing of senior Iranian military commander Qasem Soleimani — a Ukraine International Airlines flight was shot out of the sky over Tehran.

Flight PS752 had been bound for Kyiv, but was laden with passengers destined for a connecting flight to Toronto, including 55 Canadian citizens, 30 permanent residents and many others with connections to Canada. All 176 people aboard perished.

Iran initially denied involvement, only to admit three days after the crash that its military fired a pair of missiles at the jet, having mistaken it for a hostile target.

Following the disaster, Prime Minister Justin Trudeau made it clear Canada would take steps to prevent such a tragedy from ever happening again. He cited the specific expertise of the Netherlands, which developed a number of recommendations after a Malaysian Airlines flight was shot down over separatist-held territory in Ukraine in 2014, killing 298.

In neither case was the airspace closed to passenger flights, despite the obvious risk, Garneau said.

"We are not going to depend entirely on the countries where this may be happening, where there may be conflict," he said.

Canada will lead efforts among its partner countries, including members of a working group established after the Jan. 8 incident, to better share information, warnings and directions for avoiding dangerous airspace, and to improve airline safety protocols and day-to-day practices.

The initiative already has the support of the United States, where the Federal Aviation Administration operates an existing "Notice to Airmen" system designed to keep U.S. pilots and carriers apprised of potential dangers.

"The United States, of course, is a world leader with respect to how they issue (those notices) to airlines over conflict zones, so there's a lot of good things in place," Garneau said.

Eventually, he said, the initiative will include the Montreal-headquartered International Civil Aviation Organization, a UN agency that helps to co-ordinate air travel standards and practices around the world among the nearly 200 countries that operate air carriers.

They are probably a good vehicle for making sure the information is properly disseminated."

In an interview Wednesday, Garneau said Canada has already issued two notices of its own since the Ukrainian jetliner was shot down, warning airlines to avoid potentially perilous flight paths over Libya and Syria.

"We're already beginning to put into practice some of the things we think will be part of the Safer Skies strategy."

Note to readers: This is a corrected story. A previous version used an outdated figure for the number of Canadians killed.