The latest developments on COVID-19 in Canada

The latest news on the COVID-19 global pandemic (all times Eastern): 10:45 p.m. Urban Outfitters says it's temporarily closing its brick-and-mortar stores, including those in Canada, amid the COVID-19 pandemic.
Mar 14, 2020 7:47 PM By: Canadian Press 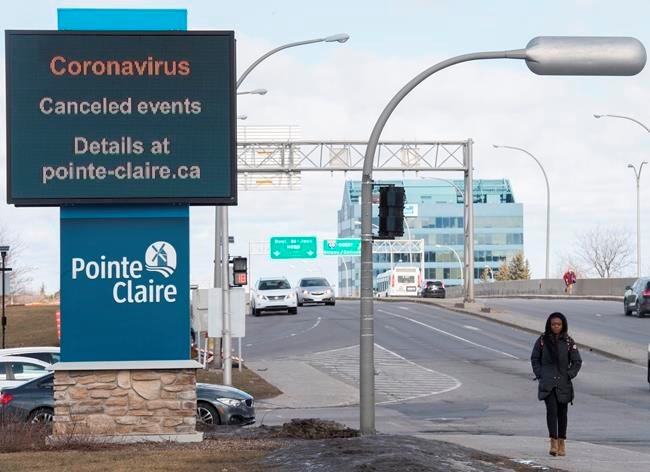 The latest news on the COVID-19 global pandemic (all times Eastern):

Urban Outfitters says it's temporarily closing its brick-and-mortar stores, including those in Canada, amid the COVID-19 pandemic.

The clothing-and-home-goods company is among the first major retailers to close brick-and-mortar stores.

Apple previously announced it would be shuttering shops, while leaving its online store open.

Health officials there say one of the patients is a health-care worker in their 30s who recently travelled to Nigeria, Germany and Alberta.

Two others live in the same household in Regina and one of the patients had recently been in Vancouver for a dental conference, where an attendee was later diagnosed with the virus.

The fourth person is in their 20s and had recently been in Tennessee.

Canoe Kayak Canada has made the decision to cancel Olympic and Paralympic Team Trials for the sprint racing discipline scheduled for April 16-19 in Gainesville, Ga.

The decision comes amid the COVID-19 pandemic that has shutdown all major sporting events in North America.

Canoe Kayak Canada says cancelling the event is in the interest of ensuring the health and well-being of all of athletes, coaches and staff following the Canadian government's recommendation to "avoid all non-essential travel outside of Canada."

CKC chief technical officer Graham Barton says that he is confident that Canada's paddle athletes will adapt and plan for all the contingencies in the coming months to stay ready.

An east Toronto hospital with one of Ontario's first COVID-19 assessment centres says it's receiving too many calls to handle.

People hoping to be tested for the virus have to call ahead before going to Michael Garron Hospital.

The assessment centre says its phone lines are fully operational, but that there are so many people calling in that calls may not go through.

Vail Resorts, which operatres Whistler Blackcomb, is suspending operations in North America from March 15 to 22.

In a statement, the company says it will use that time to reassess its approach for the rest of the season.

It says its lodging and property management operations will remain open to service the guests already there or those with existing reservations, but will not be taking new reservations for this upcoming week.

The company says it will be closing its corporate offices, apart from essential personnel and asking other employees to work from home.

It says all the scheduled employees, both seasonal and year-round, will be paid during the period, without needing to use any vacation or sick time.

Newfoundland and Labrador is reporting its first presumed case of COVID-19.

Chief medical officer of health Dr. Janice Fitzgerald made the announcement in an evening press conference.

She's encouraging people in the province to practice social distancing.

Two more people under quarantine at CFB Trenton after travelling on the Grand Princess cruise ship have tested positive for COVID-19.

The country's chief medical officer of health made the announcement today.

Dr. Theresa Tam says they're both having regular follow-ups.

A total of four people currently quarantined at the military base have tested positive for the virus.

Alberta's top public health official says there are 10 new cases of COVID-19 in the province.

Of those, Dr. Deena Hinshaw says two are in intensive care.

The most critically ill patients are in Edmonton and Calgary.

Health authorities in the province identified 22 additional cases this morning, but added the latest figures in an afternoon online briefing.

This brings the provincial tally to 103.

Ontario remains the epicentre of Canada's outbreak of the novel coronavirus, accounting for the highest number of cases nationwide.

The Calgary Flames will not be helping their part-time staff who will be underemployed during the suspension of the NHL season.

The Flames made no mention of financial assistance in an email sent to their hourly and event staff when the NHL paused the season on Thursday.

The email from the Flames to their staff was obtained by The Canadian Press on Saturday.

He says they spoke about "how we can keep people safe in both our countries."

Earlier today, Trump said he was considering restrictions on travel within the U.S. to areas hit hard by the spread of the novel coronavirus.

The TIFF Bell Lightbox in downtown Toronto will be closing for a month starting this evening at 5 p.m.

All events and programming at the theatre and film centre have been cancelled in an effort to help mitigate the spread of COVID-19.

Dr. Bonnie Henry says the new cases bring the provincial total up to 73.

Henry says the province is also adapting its testing strategy, noting more cases are expected in the coming days.

She says not everyone needs to get tested, even if they have recently travelled outside of Canada.

All of the Toronto Raptors and their travelling group have tested negative for COVID-19.

The Raptors' entire entourage was put into self-isolation on Thursday and tested for the novel coronavirus.

All but one of the tests came back negative yesterday, with the team confirming today that the final test was also negative.

Ontario is urging long-term care homes to restrict access to all non-essential visitors.

A memo from Chief Medical Officer of Health Dr. David Williams defines essential visitors as relatives of someone who is dying or gravely ill, or the parent or guardian of a sick child or youth.

Visitors who meet the tight new definitions will still be subjected to screening before being allowed inside a long-term care facility.

Williams' memo says the measure is meant to protect residents who may be more vulnerable to the effects of COVID-19.

Dr. Heather Morrison says the patient is a woman in her 50s from the Queens County area who returned from travel on a cruise ship.

She says the woman is at home with mild illness and her family is reported to be well.

The federal government says any Canadian who's abroad should get back home while it's still possible.

That's a step up from previous advice, which urged travellers outside the country to think about doing so.

He warns that commercial travel options might not remain available amid the COVID-19 pandemic.

Some countries have already taken measures such as stopping or sharply limiting air traffic.

Quebec Premier Francois Legault is asking everyone 70 years of age and older to stay home until further notice.

Legault says seniors are far more at risk for COVID-19 and that's why he's asking them to stay inside.

The premier tells a daily briefing that all visitors to hospitals, seniors' residences and long-term care facilities will be forbidden.

Legault says the province has adopted a decree to declare a state of health emergency for at least 10 days.

Hundreds of people have descended on the first dedicated COVID-19 assessment centre in Ottawa, but most have not required testing.

About 200 people were lined up to get into the community rink turned medical facility when it opened this morning.

More arrived sporadically throughout the day, but many found they didn't meet the criteria to be swabbed for signs of the virus.

Only those who have fever and cough symptoms and have travelled outside of the country or had contact with a confirmed case of COVID-19 are being tested.

Ontario Health Minister Christine Elliott says the food supply in the province is robust and the distribution system will remain responsive to the needs of all Ontarians.

Elliott says in a statement that there is plenty of food in Ontario and it will continue to reach grocery stores on a regular basis.

Her comments follow a statement by Premier Doug Ford late Friday, in which he asked Ottawa to address "the ongoing supply chain issues" in Ontario.

Three presumed instances of COVID-19 in Manitoba have been confirmed, bringing the total number of positive cases in the province to four.

The province says testing for the novel coronavirus, which causes COVID-19, has increased to more than 500 tests a day.

The Manitoba government announced on Friday that it will close schools for three weeks to try to help contain the spreading virus.

Mirvish Productions has suspended performances at all of its theatres starting with today's matinees through to April 12.

David Mirvish, the founder of the entertainment company, says he made the decision "out of an abundance of caution" to help limit the spread of COVID-19.

Shows that will be affected include "Hamilton," "Come From Away," "Summer," and "Us/Them."

"The Boy Friend," which had a limited engagement, had its entire run cancelled.

The men's curling world championship in Glasgow, Scotland, was cancelled this morning.

The World Curling Federation confirmed the decision in accordance with the Scottish government's protocols to prevent the spread of COVID-19.

Brad Gushue's rink from Newfoundland and Labrador was going to represent Canada at the world championship March 28 to April 5 after winning the 2020 Tim Hortons Brier earlier this month.

All ticket holders for the men's world championship will receive a full refund.

Quebec is reporting four new cases of COVID-19, bringing the provincial tally up to 21.

Provincial health authorities say the new cases include four in and around Montreal.

Another 853 people are under investigation and 1,399 tests have come back negative.

The province will hold an official update in Quebec City at 1 p.m.

Ontario is reporting 22 new cases of COVID-19 in the province.

The new figures were released this morning by the provincial government.

The cases appear to be concentrated across southern Ontario.

Ontario is currently reporting 101 cases of COVID-19, with four classified as resolved.

This report by The Canadian Press was first published on March 14, 2020.