'They haven't even apologized,' says mother of man killed by police after calling 911

TORONTO — The silence inside the Campbells' home west of Toronto has grown like a cancer in the weeks since April 6. That's when D'Andre Campbell, one of six siblings who live in the Brampton, Ont.
Jul 16, 2020 4:00 AM By: Canadian Press 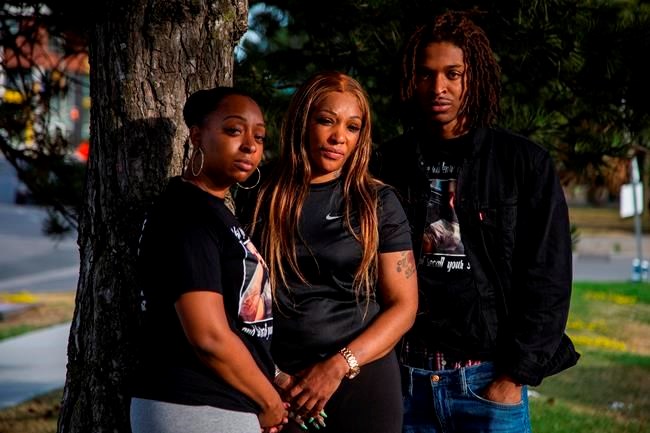 TORONTO — The silence inside the Campbells' home west of Toronto has grown like a cancer in the weeks since April 6.

That's when D'Andre Campbell, one of six siblings who live in the Brampton, Ont., home with their parents, called 911 on himself and was later shot dead by police.

Before that night, laughter filled the house, along with the sounds of D'Andre Campbell's footsteps. He was the only one who wore shoes inside the house, his mother recalls, and the sound telegraphed his movements at all hours of the day.

"I miss those footsteps," says Yvonne Campbell, as tears fall into her face mask.

D'Andre Campbell's family still does not know why he called 911 that night. The province's police watchdog, the Special Investigations Unit, says officers from Peel Regional Police were dispatched to a "domestic situation," but the family says the 26-year-old was no threat to anyone that day.

Two officers fired stun guns at Campbell before another officer fired his gun multiple times, according to the SIU, which has taken over the investigation. The SIU says a knife was recovered at the scene.

The Campbells, who are Black,  say several of them witnessed D'Andre's death in the kitchen of their home, where he used to eat some of his favourite foods: spaghetti, lasagna and ice cream.

"My brother bled out there instantly and he didn't do anything wrong," says Campbell's sister, Michelle.

Three months later, the family says they have yet to hear from both the SIU and Peel police.

"I need justice for my son, I need answers," Yvonne Campbell says in a recent interview at the office of the family's lawyers — Jeremy Solomon and Mary DeRose — who are contemplating litigation.

The family did not want to discuss details of D'Andre Campbell's death due to the possibility of a civil action. But they want the public to know about his life.

Nearly 10 years ago, when D'Andre Campbell was 17, doctors diagnosed him with schizophrenia. The family noticed he became quiet and withdrawn.

"He got very paranoid, so I knew something was off," Yvonne Campbell says.

Doctors prescribed him medication, she says, and he lived the vast majority of his life symptom-free — smiling, laughing and listening to music.

He worked for four years at a company's shipping and receiving department and was doing well for a time, Yvonne Campbell says, but at some point he "got a little edgy" and was given some time off.

He returned briefly to work, then stopped.

"I didn't really pressure him to work because I know his situation," his mother says. "I'd rather he be home."

The young man became a homebody, only leaving to go to the store, buy lottery tickets or to celebrate his birthday in mid-December at his favourite restaurant, Mandarin.

He felt safe in his home, the family says, and often did not go on vacation with them.

The family says they called 911 on several occasions in the past when D'Andre Campbell hit a "peak," which usually indicated his medication was no longer working.

"He'd be back and forth, wouldn't sit down and always thought there was something there," Michelle Campbell says.

Calling 911 was "the only way we can get him to see a doctor, he willingly won't want to go, so we have to call police and then he'll go," Michelle Campbell says. He'd spend a few days in hospital and then be fine.

The family say they want answers, but the SIU investigation into the young man's death could take up to a year to conclude.

"The system is screwed up," Michelle Campbell says. "Three months later and we still don't know anything. It's not fair and I don't have any faith in the investigation."

The family wants to know the contents of the 911 call along with the name of the officer who killed D'Andre Campbell. They also want that officer to talk to the SIU and provide his notes, which the watchdog agency says he has not done.

The SIU says they've interviewed four officers who witnessed the killing, but legally cannot compel the officer who shot D'Andre Campbell to be interviewed or give over his notes due to a regulation in the provincial Police Services Act.

Spokeswoman Monica Hudon says the agency only recently received results from the Centre of Forensic Science for items of evidence and received the post-mortem results last week.

"While the SIU recognizes it is important to resolve cases in a timely manner, the thoroughness of the investigation must take precedence over the length of time it takes to finish an investigation," Hudon says.

The Campbells also want to see changes to the way police respond to calls involving people who struggle with mental illness.

Yvonne Campbell wants police to say they're sorry for her son's death.

"The police have torn my family apart," she says. "They haven't even apologized, or offered condolences."

Peel police did not immediately respond to a request for comment.

The youngest Campbell sibling, 10-year-old Claudius Jr., is struggling to cope with the sudden death of his brother, who would often offer him late-night snacks. Now the boy often cries alone in his room.

"Sometimes he doesn't want to sleep by himself so he comes into my room and I put on the TV till he falls asleep," says Michelle Campbell, the eldest of the siblings at 29, as she wipes tears from her face.

Dajour Campbell, wearing a shirt with his late brother's image on it, says time has lost its meaning.

"It's been the same day on repeat. I don't feel like getting out of my bed," the 22-year-old says. "It doesn't feel like the same house."

Yvonne Campbell says she tries to fill the silence with music to keep thoughts of what happened to her son at bay.

"It's very hard," she says. "Every day we get up looking for answers and there are no answers."

U.S. left out key statements by Huawei executive in extradition request: lawyer
Aug 14, 2020 6:37 PM
Comments
We welcome your feedback and encourage you to share your thoughts. We ask that you be respectful of others and their points of view, refrain from personal attacks and stay on topic. To learn about our commenting policies and how we moderate, please read our Community Guidelines.