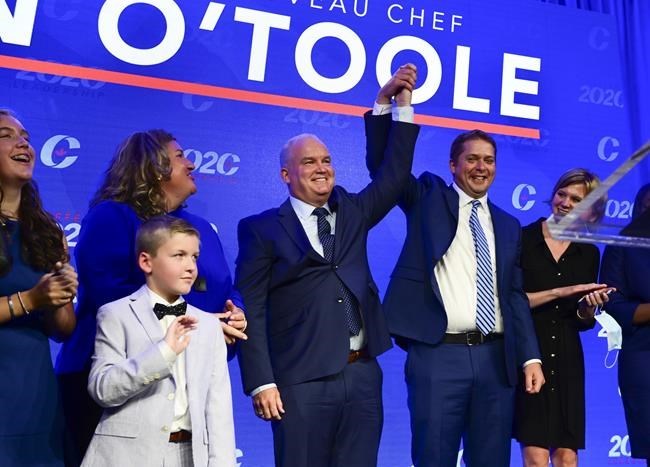 OTTAWA — Conservative MPs vented some disappointment in their former leader — and current caucus colleague — Andrew Scheer Wednesday after revelations he twice hired family members to work in his office.

Alberta MP Shannon Stubbs was one of them, saying she thinks Canadians should expect MPs to avoid making such choices.

Their chance to let off steam in their weekly caucus meeting came as current leader Erin O'Toole expressed his frustrations.

He also sought to deliver a clear message to his team: his party is held to a high standard and following the letter of the rules isn't enough.

Convention holds that MPs aren't allowed to detail caucus deliberations, but multiple sources who spoke on the condition of anonymity told The Canadian Press O'Toole's message fell a bit flat as MPs were caught off guard by his public response to Scheer.

Many said they felt that since Scheer did in fact follow the rules when he hired his sister in the past, and his sister-in-law more recently, O'Toole would have been more publicly in Scheer's corner.

Scheer's sister was let go from her job in his office when a ban on hiring siblings was implemented in 2012, while his sister-in-law's work in his constituency office was terminated this week.

The revelations surfaced in the media this week and O'Toole had said Tuesday he would discuss the issue with Scheer and later with his MPs.

"He has met the rules and has been transparent in accordance with the rules but I'll be talking about my expectations, which exceed that," O'Toole had said.

O'Toole and Scheer spoke Tuesday night but neither had anything to add on Wednesday.

As they gathered for their meeting Wednesday, Tory MPs said the rules ought to be broadened to forbid giving jobs to in-laws, but MPs should also have better judgment.

"I think it's fair of Canadians to expect that elected representatives would avoid that kind of decision," said Stubbs.

"Probably it is the right thing to not hire your in-laws."

The Board of Internal Economy, the all-party body that sets guidelines for MPs, is expected to discuss who MPs can or can't hire at its meeting Thursday.

That discussion is also being driven by a former Liberal MP, Yasmin Ratansi, who resigned from her caucus to sit as an Independent after it emerged she had hired her sister to work in her office.

The Conservatives had previously asked the board to impose "remedial measures" on Ratansi and order her to reimburse the money paid to her sister.

While there are rules around MPs hiring their own family members, it is not uncommon for their families to find work on the Hill.

Up until he became leader, O'Toole's wife Rebecca worked for Tory MP Ron Liepert. Previously, she'd had a lengthy private sector career as an executive assistant for the CEO of the Toronto Argonauts, among other private entities.

Tories have said equating Scheer and Ratansi is unfair, as he did clear the jobs with the ethics commissioner.

Scheer was serving first as deputy speaker and then Speaker of the House of Commons while his sister, Anne Marie Grabetz, was working in his office.

The Speaker chairs the Board of Internal Economy and so Scheer was part of the team that changed the rules in 2012 to include siblings on the list of people MPs aren't allowed to hire. His sister left her job afterwards.

His sister-in-law, Erica Honoway, had worked in his constituency office since 2007 doing the bookkeeping, and was let go this week.

Her job had been cleared by the ethics commissioner, Scheer said in a statement.

"I understand that in this case, following the rules may not have been enough," he said.

"Even the perception of a conflict concerns me."

How Scheer spent money became one of the pressure points that eventually led him to quit as leader of the party late last year after the federal election.

Party members became furious over revelations that their donated funds were used to cover his children's private school tuition, and a subsequent audit also turned up spending on private security, an extra housekeeper and other personal matters.

His wife Jill has also done work with her sister's other business, an interior design firm.

This report by The Canadian Press was first published Nov. 18, 2020.