OTTAWA — Prime Minister Justin Trudeau has rejected Donald Trump's latest proposal to readmit Russia to the G7, stoking old divisions between the American president and the rest of the group.
Jun 1, 2020 2:33 PM By: Canadian Press 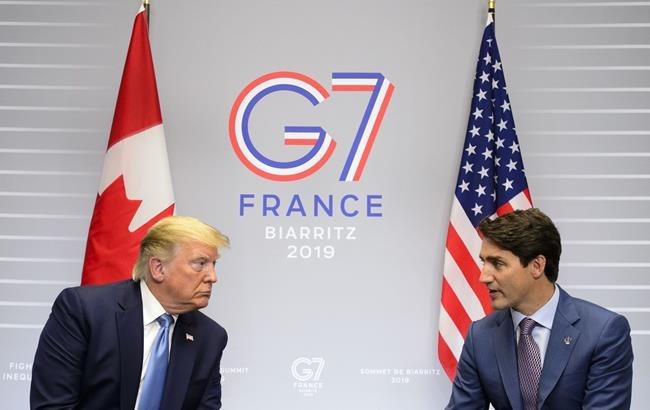 OTTAWA — Prime Minister Justin Trudeau has rejected Donald Trump's latest proposal to readmit Russia to the G7, stoking old divisions between the American president and the rest of the group.

Trump was to host the G7 summit later this month but postponed it to the fall because of the mass protests rocking the United States. He also mused that he would like to see Russia, India, South Korea and Australia added to what he calls a "very outdated" group of countries.

It wasn't the first time Trump has raised the possibility of bringing Russia back to the G7 — he made similar comments two years ago on the eve of a leaders' summit that Trudeau hosted in Charlevoix, Que.

Trudeau said Monday that nothing has changed since the G7 ejected Russia from what was then the G8 in 2014, over its annexation of territory from Ukraine.

"Russia was excluded from the G7 after it invaded Crimea a number of years ago. And its continued disrespect and flaunting of international rules and norms is why it remains outside of the G7, and will continue to remain out," the prime minister said.

The 2018 summit ended in disarray with Trump hurling insults at Trudeau over Twitter after he departed Charlevoix. Canada and the U.S. were mired in a contentious renegotiation of the North American Free Trade Agreement at the time, and Trudeau reiterated his opposition to U.S. steel and aluminum tariffs at the summit's closing press conference. Trump was bound for a historic summit in North Korea when he heard them.

Trump threw a monkey wrench into the start of the summit, when he said before arriving that Russia should be participating. Trump has always been outraged by the findings of U.S. intelligence services that Russia interfered in the 2016 presidential election that brought him to power.

Bessma Momani, an international affairs expert at the University of Waterloo, said many G7 leaders might not want to be associated with Trump given he has become such an international outlier in recent weeks.

"It would be difficult for many political leaders to give Trump the aura of global leadership at a time when race relations are their worst in the United States," said Momani.

"There is some global support for the Black Lives Matter movement and many of the G7 governments may be mindful that providing Trump with a photo-op will be misconstrued as support for his actions and words in these tense times."

John Kirton, the University of Toronto professor who has made a career out of studying the G7 summitry, said Trump could have still hosted the summit, albeit in a videoconference format, despite the current challenges.

"Why he wouldn't have wanted to show the American people that he was working, and doing it, and that he had gotten these important countries ... to work co-operatively, only he knows. If, in fact, he can remember what his thinking was."

Ben Rowswell, the president of the Canadian International Council, said the postponement could potentially lead to the summit being missed altogether this year.

"President Trump's proposal to add countries that are hostile to the group, such as Russia, greatly reduces the likelihood that the group will agree to a communique," he said.

"Frankly, skipping a year may be the best outcome for the ongoing relevance and effectiveness of the G7, to avoid the kind of confrontation that would put future summits in jeopardy."

Late last month, Trump and White House officials were considering the idea of holding an in-person G7 summit near Washington.

Trudeau said then that in-person G7 meetings leaders are more effective than the virtual alternative, but he said he wanted to make sure the U.S. had plans to deal with the health risks posed by COVID-19.

"We've always been working with the United States to co-ordinate when we can hold this important G7 meeting. It's really important to keep holding these meetings and co-ordinating internationally in this time of crisis," Trudeau said Monday.

The G7 includes Canada, France, Germany, Italy, Japan, Britain and the U.S., with the presidency rotating annually among member countries. The European Union is also a member.

Quebec police continue search for father, one day after missing girls found dead
Jul 12, 2020 7:36 AM
Comments
We welcome your feedback and encourage you to share your thoughts. We ask that you be respectful of others and their points of view, refrain from personal attacks and stay on topic. To learn about our commenting policies and how we moderate, please read our Community Guidelines.