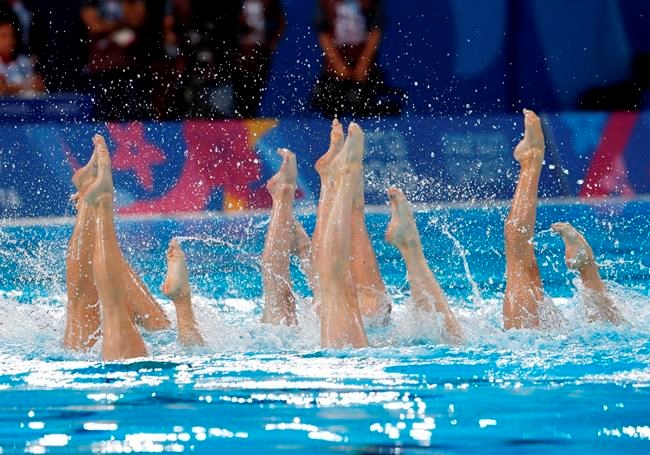 Chloe Isaac, Gabrielle Boisvert, Erin Wilson, Sion Ormond and Gabriella Brisson allege Canada Artistic Swimming did not provide an environment "free of psychological abuse, neglect and harassment" during their time with the program from 2007 to 2020.

In a videoconference, Isaac said artistic swimming encourages "unrealistic and unhealthy" beauty standards, including pressure to maintain an unhealthy weight.

"We're asked to crush our identity, our authenticity for the benefit of the team so that we all swim in unison," said Isaac, who was a member of the national team from 2008 to 2014.

She also described the effects of being pressured to maintain a low body weight.

“I have experienced eating disorders, anorexia and bulimia," she said.

"Since I was no longer able to take all this pressure, I was prescribed antidepressants in the hope of alleviating my anxiety. ”

Isaac said she tried to speak with her colleagues and technical team to get help eight years ago.

Wilson said she has similar experiences during her time on the team from 2007 to 2013.

She said team members had to sign an agreement to respect a weight limit, with "serious consequences" if they were more than three per cent over the target.

Cara Cameron, one of the lawyers working on the file, alleges that Canada Artistic Swimming was made aware of the problems experienced by athletes over the last decade, both verbally and in written form.

"The responses were, let's say, inadequate," she said.

The lawsuit comes after Canada Artistic Swimming released results of an independent investigation in October into complaints about harassment and a culture of fear at the team's training centre in Montreal.

While the investigation found no instances of physical abuse, sexual abuse or hazing, nearly half of the those interviewed said they'd witnessed or experienced psychological abuse by coaches, staff or other athletes.

She said the organization commended the courage of the athletes who spoke Tuesday. She also said an independent safe-sport investigation late last year did not find "sufficient evidence to conclude there is an unsafe training environment in the senior national team program."

While the investigation found no instances of physical abuse, sexual abuse or hazing, nearly half of those interviewed said they'd witnessed or experienced psychological abuse by coaches, staff or other athletes.

When the investigation results were released in late-October, Canada Artistic Swimming temporarily closed its national training centre in Montreal, and Buckingham vowed to "rip off the Band-Aid" in a widespread effort to build a better culture and safer space for athletes.

In an interview with the CBC last fall, four swimmers said Szauder had made racist and weight-shaming remarks.

The New York Times reported Szauder has since faced similar criticism from swimmers and officials in Slovakia, where he coached from 2013 to 2018, before leaving to coach in Canada.

Szauder did not immediately respond to a request for comment.

Former Olympic gold medallist Sylvie Frechette appeared by videoconference on Tuesday to offer her support to the athletes and to denounce a situation she said had gone on too long.

Frechette, who won the women's solo event in 1992, said she was angry, though not surprised, after hearing a number of stories over the past few weeks.

"I realized with a lot of emotion that what I read, it's a bit my own story too," she said. "Not all, but a bit too much. That made me realize that the more times change, the more they stay the same. I'm so sorry to have not reacted earlier."

Michelle Cameron-Coulter, who won duet gold at the 1988 Olympics with Carolyn Waldo, felt a connection as well.

"It's already a challenging sport for these young women, as far as being judged, self-esteem, and . . . the number of cases of eating disorders in our sport already, and I share this experience of having gone through that myself, the last five years I swam and 10 years afterward," she said from her Calgary home.

"(Body image) is a big challenge in sport for young women, period. And then if you escalate that with a coach that is not aware of the impact, it's really detrimental. I am grateful these conversations are happening, because it's not OK what's happening for our young athletes, and that needs to shift."

Gretchen Kerr, a prominent researcher on athlete mistreatment, said the tendency in these cases is to focus on the coach at the centre of the allegations.

"But it's really a more systemic problem in the sense that these people are hired, presumably vetted when they're hired, reference checks, were inappropriate comments addressed before they were deemed to be acceptable because nobody intervened?"

"It's a broader cultural issue within sport," Kerr said. "We can't just focus on the individual perpetrators, they've been allowed to exist in, in a system."

Kerr, a University of Toronto kinesiology and physical education professor, said the sport is susceptible to gender-based violence.

"The fact that it's an all-female athletes sport makes them more vulnerable, particularly to body-related violence, which is certainly what the athletes are describing, the body shaming, the name-calling about their bodies and all the subsequent disordered eating and eating disorders," she said.

The Instagram account @mental_abuse_nac gives artistic swimmers a platform to voice their concerns. It has more than 50 anonymous posts. Kerr compared it to the hashtag #gymnasticsalliance which helped force the reckoning of abuse in gymnastics.

"We call on all sport organizations and coaches to prioritize the safety and well-being of women and girls in their programs," she said in an email, "and to use this latest case as a catalyst to review your programs and seek training on how to create safe and inclusive environments for women and girls."

This report by The Canadian Press was first published March 9, 2021.