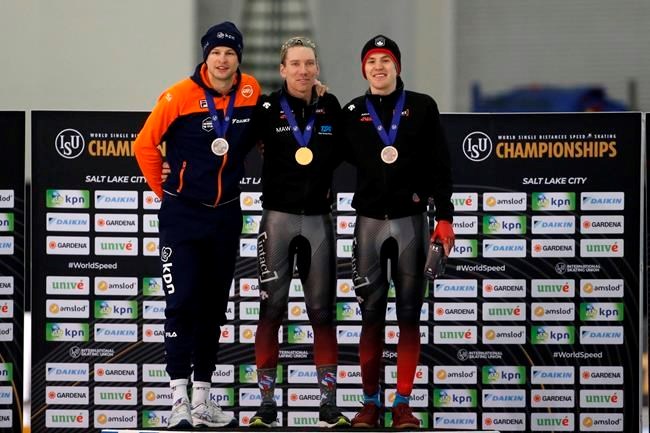 The Canadian had not made the top of the podium since the Olympics, however.

"It feels amazing to be world champion, especially after two years of struggling to compete with the best in the world," said Bloemen. "Going into this competition, I felt like I could win again. To be back in the mix at the right time, at the world championships, is really cool.

"I've had a great team, great training partners and my coaches have been relentless in getting me back on track and keeping my eyes forward. We did this together."

It was the first world title for Bloemen, a rising star who won gold in the 10,000 at the Pyeongchang Games.

"Going into the season, I made this race really important for myself," Bloemen said. "Working toward the Olympics in two years is so far away, so you've got to set goals along the way. This oval for me is really special. I skated two world records here and I thought that might be a possibility again today."

Ottawa's Ivanie Blondin was the top Canadian in the women's 3,000 metres, finishing sixth in a personal-best time of 3:57.56. Ottawa's Isabelle Weidemann was 10th and Valerie Maltais of Saguenay, Que., was 12th.

Martina Sablikova of the Czech Republic finished first, followed by Carlijn Achtereekte of the Netherlands and Natalia Voronina of Russia.

Sablikova, a three-time Olympic gold , won a world championship in Utah for the second time. She won gold in the 3,000 and 5,000 at the 2007 World Championships.

"In two years, nobody knows what is going to happen," Sablikova said. "But I'm enjoying this moment and this medal. Now I can think about the Winter Olympics."

The Netherlands set a world record in women’s team sprint, finishing in 1:24.02. Russia and Poland finished second and third, respectively.

—With files from The Associated Press

This report by The Canadian Press was first published Feb. 13, 2020.

Note to readers: This is a corrected story. Incorrect information about Ted-Jan Bloemen's medal history appeared in a previous version.