Professional sports leagues in North America are getting deeper into conversations about when and how they can resume play during the COVID-19 pandemic.
Jun 4, 2020 11:22 AM By: Canadian Press 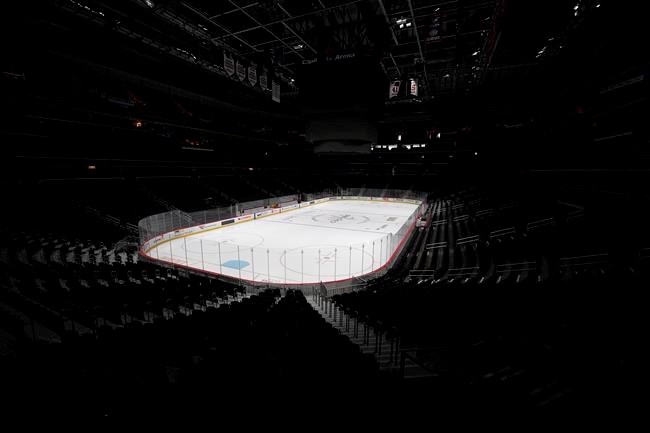 Professional sports leagues in North America are getting deeper into conversations about when and how they can resume play during the COVID-19 pandemic.

And while they're still looking weeks or months into the future for potential return dates, infectious disease experts say there's a great risk in starting up too early.

But there are also plenty of ways to mitigate that danger.

"It's a complex question, but I think if certain safeguards and processes are taken, it can be safe (to resume play)," said Dr. Isaac Bogoch, an infectious disease physician and scientist based out of Toronto General Hospital.

"I think those are the key things to ask."

Bogoch said those questions involve a lot of "key decision makers," and having the green light from federal, provincial and municipal public health authorities would be step 1.

Another key piece would be ensuring proper and frequent screening — including symptom and temperature checks as well as diagnostic COVID testing — for players, coaches and support staff that will be entering the arenas.

"I think that needs to be thought through about how to do it, and how to integrate that into the league, and ensuring people are COVID-19 negative before they even start training," Bogoch said.

The NHL outlined its proposal last week for a potential return to action later this summer, and the NBA's Board of Governors reportedly approved plans Thursday for a late July restart at Disney World in Orlando, Fla. Major League Soccer hopes to resume with a summer tournament, also in Orlando.

MLB, which hadn't yet started its 2020 regular season before the pandemic postponed the sports world in March, is in talks to begin an abbreviated schedule over the next couple months. The CFL also has not announced a plan, though it is has said the earliest a season will start is September.

Lorian Hardcastle, a professor of health, law and policy at the University of Calgary, says daily COVID testing, which the NHL says it hopes to achieve, can help ensure a safe return for these sports.

Logistical issues would also need to be ironed out, she said, like ensuring the league not only has enough tests but also access to a lab that would be able to turn results around quickly.

"Daily testing would hopefully isolate whoever has contracted anything right away," Hardcastle said. "And their contacts (teammates and support staff) will already be being tested, so hopefully it would be (contained) very quickly."

Frequent testing becomes even more pressing in a team environment, where there's virtually no way to ensure physical distancing while playing, Hardcastle said.

And while Bogoch says safety precautions can be fairly easy to add to immediate off-field areas — spacing players out in locker-rooms, for example, or wearing masks in team meeting rooms — there are also places outside the stadium to consider.

Many leagues are minimizing risk there by proposing "hub cities" that would host all the games, rather than having players travel across the continent to multiple venues.

Patrick Saunders-Hastings, an epidemiologist at Carleton University in Ottawa, says that can be a sound strategy.

"Whenever there's travel between regions, there's this equalization of risk," he said "But if those athletes are coming from higher-risk communities to a lower-risk of one, they can increase the risk in those cities."

Hardcastle says there are also other people to consider outside of players and support staff.

"The people cleaning their hotel rooms or the people serving them food ... those are people who I think the league will probably go to significant efforts to protect also," she said. "But you can always have a slip and have someone exposed who didn't consent to being around symptomatic people — and who isn't getting paid significantly to be around symptomatic people.

"I can promise you the maids at the hotels are not being compensated accordingly."

COVID-19 reached the sports world in mid-March, when the NBA suspended its season after a Utah Jazz player tested positive. Other leagues quickly followed suit.

Bogoch says he's OK with that statement, "as long as you have systems in place to protect others, and as long as you can ensure that the close contacts of that person are screened and isolated."

"No one should be surprised if a player tests positive," he added. "If you have the protocols in place to identify that quickly ... you could significantly reduce the risk of COVID-19 in professional sport."

Hardcastle, meanwhile, says she's "certainly concerned" that a league would keep going despite a positive test.

Having alternate strategies in place to mitigate risk — like pausing play for a two-week period — could be a safer option, she said.

Saunders-Hastings suggested quarantining the whole team of the infected player for a two-week period, though he added that would cause problems for the rest of the league's schedule.

And while he also believes one positive test won't necessarily shut down a league, he says it's tough to gauge whether play could safely continue after that.

"One case in isolation while they verify that additional cases are not occurring could allow a league to continue," he said. "But if we do start to see sustained transmission between teams or across multiple teams, I think it's quite difficult to say that the league would not be shut down."

In addition to regular testing, Saunders-Hastings says leagues should ensure players and staff can make their own decisions on returning based on their individual COVID-19 risk levels.

That can include people who are immunocompromised or have pre-existing conditions or have families with those conditions as well, he said.

One of the most visible safety precautions being taken by each pro league is the exclusion of fans for the foreseeable future.

Hardcastle says discussions on returning fans to stadiums can't be had until a second wave of the pandemic has passed, or a vaccine is developed.

Saunders-Hastings agrees, though he sees a scenario where "scaled down, distanced crowds" may be possible at some point.

"But even then, in stadiums we know there are bottlenecks that will produce transmission potential," he said. "So it would be a calculation related to the availability of control measures — certainly vaccines, but also diagnostic testing and tracing capacity.

"I would personally be quite concerned about a full stadium and the possibility of one asymptomatic case leading to a superspreader event."

This report by The Canadian Press was first published June 4, 2020.