Daniel Joseph is making quite the first impression at North Carolina State University. The six-foot-three, 265-pound defensive lineman from Brampton, Ont., has a team-high 6.
Dec 2, 2020 2:17 PM By: Canadian Press 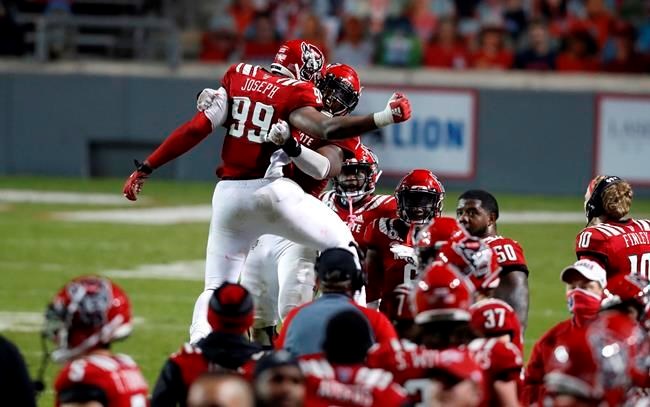 Daniel Joseph is making quite the first impression at North Carolina State University.

The six-foot-three, 265-pound defensive lineman from Brampton, Ont., has a team-high 6.5 sacks (tied for third in ACC) in his first season with the Wolfpack (6-3) and is also tied for the team lead in tackles for a loss (9.5). That far exceeds what Johnson accomplished playing three seasons at Penn State (2.5 sacks, 5.5 tackles for a loss over 32 games).

That's certainly impressive for someone who left Canada to attend high school in the U.S. to pursue a NCAA basketball scholarship. And although Joseph's older brother, Faith Ekakitie, and cousin, Ese Mrabure-Ajufo, have both been CFL defensive linemen, Joseph said basketball remains the No. 1 sport in his family.

"All three of my brothers, I'm pretty sure we all had hoop dreams at one point," Joseph said during a videoconference with Canadian reporters. "We played with a lot of notable guys like Andrew Wiggins, Anthony Bennett, Tristan Thompson, Tyler Ennis, Jamaal Murray . . . the list goes on and on of guys that we were fortunate to be around and play with.

"Being exposed to that consistently growing up and competing and knowing you have to perform in a group of guys like that has always been beneficial for me. It has allowed me to constantly keep working and keep pushing no matter what the scenario is."

Joseph said while he respects the Toronto Raptors for winning the 2019 NBA championship, he's always been a diehard Chicago Bulls fan.

"My man D-Rose (guard Derrick Rose) is one of the most electric players I've ever got to see play," Joseph said. "I got the opportunity to see him play in Chicago and ever since then, the United Center and the Bulls have been my pick.

"The Toronto Raptors, I definitely respect them . . . I'm grateful because they brought the trophy home to my city but I ain't a fan."

Both Mrabure-Ajufo and Ekakitie were first-round CFL picks by B.C. (No. 5 in 2015) and Winnipeg (first overall in 2017) respectively. But Joseph said he didn't begin playing football until after his junior year at Lake Forest Academy in Illinois.

"I know for my brother it (transition to football) was more evident because he was a lot bigger and just built like a football player," Joseph said. "For me, it definitely was a less evident transition.

"Before (playing football) I had high hopes to still pursue and excel in basketball."

North Carolina State was among the schools to recruit Joseph out of high school before he ultimately committed to Penn State. But after last season, Joseph had figured he'd done all he could with the Nittany Lions and transferred to the Wolfpack in February as a graduate student.

"I just thought my time at Penn State was done," Joseph said. "I thought I'd accomplished some of the things I wanted to accomplish but there were other areas in which I knew I'd not accomplished my goals and dreams.

"I just knew N.C. State was already a place that had a good history in terms of defensive linemen. I wasn't totally unaware of who NC State was, they also recruited me out of high school and so I was familiar with them."

Joseph said his 2020 production is based more upon getting an opportunity to perform rather than anything North Carolina State is doing differently than Penn State.

"Honestly, I don't think anything has really clicked," he said. "I've always believed in my ability to play the game, I think now I actually get an opportunity to really play and be able to put it on film for the world to see."

But increased production hasn't been the only difference this year for Joseph. So has winning as North Carolina State will chase its seventh win Saturday against Georgia Tech (3-5) while Penn State (1-5) faces Rutgers (2-4) having snapped its five-game losing streak.

"I check in on (Nittany Lions) here and there because I still have guys who play there that I'm close with," Joseph said. "But I don't really keep up with them, I just worry about my own season here.

"There's only so much other football you can watch outside of game preparation."

While the 2020 season remains first and foremost on Joseph's radar, he will have to address his football future this off-season. He'd like to secure an opportunity in the NFL but he'd also be eligible to return to North Carolina State next year due to the COVID'-19 pandemic.

Joseph said he hasn't spoken much with Ekakitie regarding the pro ranks.

"I don't want to get ahead of myself," he said. "I want to stay in the moment and stay where I am presently and make sure I capitalize on and maximize everything that I can do to get to that point.

"It (Georgia Tech game) is a crucial game in my opinion. It will be our last (regular-season) game and it's an opportunity again to show the world what we're able to do . . . it's another opportunity to prove the naysayers wrong."

This report by The Canadian Press was first published Dec. 2, 2020