Whitecaps icon Bob Lenarduzzi remembers watching Alphonso Davies knock the ball ahead on a run and thinking the youngster's touch was too heavy.
May 27, 2020 9:28 AM By: Canadian Press 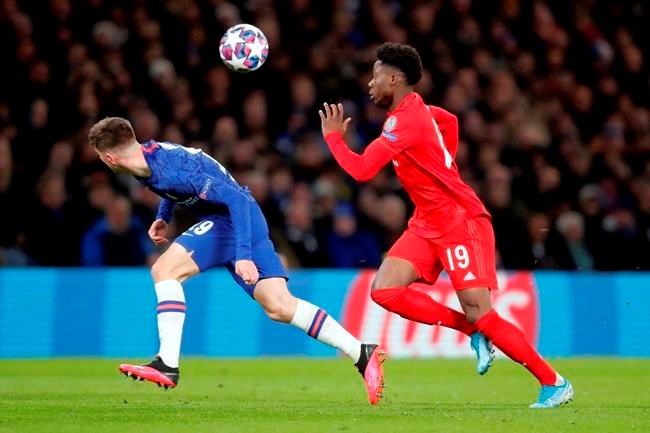 Whitecaps icon Bob Lenarduzzi remembers watching Alphonso Davies knock the ball ahead on a run and thinking the youngster's touch was too heavy.

Only to see the opposition defender, clearly believing the same thing, slide in for the tackle and have Davies race past him. For Lenarduzzi, that shows a potent mix of speed and smarts.

"I used to think 'Man, he gets lucky with that,'" said Lenarduzzi, a former Vancouver Whitecaps president who now serves as the MLS team's club liaison. "I think he actually does it on purpose. He actually knocks it a little bit ahead of himself and maybe a little further so the guy thinks 'OK, I'll just go to ground and win the ball.'

"But he has that quick acceleration and then as the guy's sliding, he's just nicking it by him and (the defender) is lying on his backside and he's running towards the opposition's goal. The number of times that happens means it's not a fluke."

Since leaving Vancouver, the 19-year-old Davies has turned heads and won fans at left back for Bayern Munich.

On Tuesday, he showed his blistering speed when he ran down Borussia Dortmund striker Erling Haaland from behind and ended a penalty box threat in the 33rd minute.

Six minutes later at the other end of the pitch, he dribbled through a box of four Dortmund defenders and headed towards goal, only to be shoved off the ball finally by German international Mats Hummels.

"What a fabulous talent ... So rapid and intelligent whether going forward or backwards," tweeted former England striker Gary Lineker, now a TV pundit in Britain.

Davies was clocked at 35.3 km/h in chasing down Haaland, almost cracking the Bundesliga's top-10 recorded speeds, according to the German league's website. The six-foot-four, 192-pound Haaland, a 19-year-old phenom in his own right, is no slouch when it comes to acceleration — he has been recorded at 34 km/h.

"Sometimes maybe he is not in the best position on the field but when the opponent thinks 'Oh, I've got time, I've got time,' and then 'Meep, meep, meep.' The Road Runner," Mueller said after Tuesday's game. "The FC Bayern Road Runner comes ahead and steals the ball."

Such pace would give Lenarduzzi nightmares. A fullback himself, he had to rely on positional savvy rather than speed.

"I had to make sure that I got myself in the right spot to not get burned with pace," he said.

"I just dreaded playing against him, because he was just so fast," said Lenarduzzi. "But he was straight-ahead fast."

For Lenarduzzi, Davies is straight-ahead quick but also smart and tricky.

Davies' speed is nothing new to Nick Huoseh, who coached him as a youngster and now represents him.

"He was like a gazelle," said Huoseh. "He would just take off and you can't catch him.

Davies also ran cross-country "and a lot of stairs and hills when I coached him," said Huoseh.

"He's always been a good runner, even when I was watching him when he was 10 years old and he was playing in the leagues here before I started coaching him," he added. "He was always so fast."

Fullback offers room for Davies to stretch those legs.

Former Bayern captain Oliver Kahn, now a member of the club's executive board, says Davies' has "an incredible amount to offer" on the flank.

The young Canadian comes with more than just pure speed, however. He is a constant, leading all players with 31 touches through the first 26 minutes of the Dortmund game.

And he is hard to dislodge off the ball.

In April, British soccer magazine FourFourTwo had Davies at No. 10 in its list of top 10 fullbacks in the world.

"Davies is an excellent crosser of the ball and gets up to support play when Bayern attack, such are his natural instincts. His lightning speed, however, means that what he lacks in positional sense he more than makes up for in his ability to get back in time," the magazine wrote.

Davies has moved up on many observers' lists, all the more impressive given is a converted winger.

Injuries forced Bayern to shift David Alaba from fullback to centre back with Davies slotting in to replace him. Now Bayern is in the "if it ain't broke, why fix it stage."

Davies deflects praise, crediting the team around him and noting he has a "world class-left back next to him in Alaba."

In starting every game in the Bundesliga, German Cup and Champions League for the senior team since Oct. 28, Davies is keeping Bayern record signing Lucas Hernandez on the bench.

The French international arrived from Atletico Madrid last July for a transfer fee of 80 million euros ($121.5 million). A year prior, Davies cost the German powerhouse some US$22 million, at the time an MLS record transfer fee.