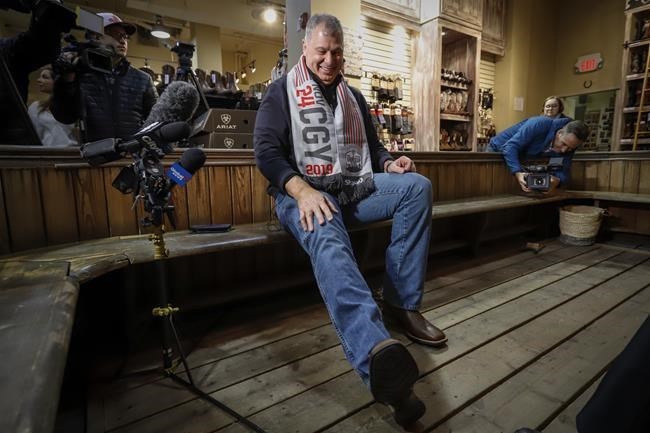 The league's commissioner will hold a video town hall question-and-answer session with football supporters Friday at noon ET on the league's website.

Ambrosie said it's important to him to keep CFL fans engaged and informed during the novel coronavirus outbreak.

"It will be the first time in two weeks that I'll have a dress shirt on," the personable Ambrosie said. "So that's kind of cool."

Ambrosie has been meeting with both league officials and the CFL Players' Association discussing all potential contingency plans for the 2020 season. Ambrosie said Wednesday no formal decisions have been made regarding whether training camps or the regular campaign will open on time.

Training camps are scheduled to open May 17 with the regular season kicking off June 11.

Engaging with fans is something Ambrosie has done consistently since becoming commissioner in July 2017. He makes an annual cross-country trek meeting with CFL enthusiasts in all nine league cities as well as Halifax, where a group is actively working on securing an expansion franchise.

And last week, he issued a letter to fans about what they can do to remain safe and help stem the COVID-19 curve.

"I think we just have to ask everyone to think of themselves like players on a football team where everyone has a job to do," Ambrosie said. "If we all do our job, we have a better chance of winning.

"That's why (health officials are) asking people to social distance, to quarantine when they suspect they might have symptoms, to do all the right things because the sooner we solve the underlying problems, the sooner we can get back to all the things we all love doing."

David Gornto, a Montreal Alouettes supporter from Tennessee, went a step further. He took to Twitter on March 16, posting a photo of a Als jersey he donned last year when the franchise recorded double-digit wins for the first time since 2012.

He also added the following message: "I miss @CFL and want every Monday to take a break from what is making me nervous/anxious with something I love, football. Will you join me and share a picture and use #HowICFL. The @MTLAlouettes jersey that carries a lot of magic. #CFLFamily."

Not surprisingly, Ambrosie has ideas for other potential segments.

"There are ideas being floated about, how do you engage people in a conversation about their favourite CFL memory," Ambrosie said. "What's their favourite Grey Cup memory, what was the best Grey Cup ever.

Incidentally, that's the year Ambrosie, a former CFL offensive lineman, won his only Grey Cup as a player with the Edmonton Eskimos.

And Ambrosie said the CFL is thinking about other programs aimed at fan engagement.

"We've got a lot of really good ideas we're working on, some of which are in place already," he said. "(We're) asking our players to get involved and use their voice on social distancing and respecting quarantines and things of those nature.

"We're two weeks into this so it's not like we've got everything figured out. But I think we're doing a lot of good stuff and there's more to come."

This report by The Canadian Press was first published March 25, 2020