MANCHESTER, England — Trailing 3-0 at home to their fierce local rivals in a cup semifinal, Manchester United’s players were jeered by their own supporters as they traipsed off at halftime.
Jan 7, 2020 3:39 PM By: Canadian Press 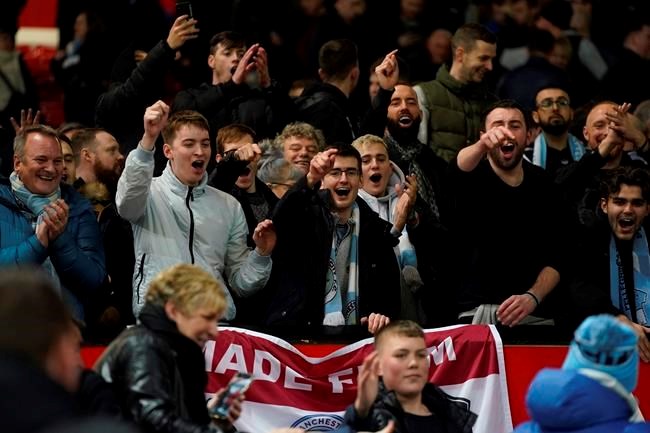 MANCHESTER, England — Trailing 3-0 at home to their fierce local rivals in a cup semifinal, Manchester United’s players were jeered by their own supporters as they traipsed off at halftime.

It was - as United manager Ole Gunnar Solskjaer attested afterward - the team’s worst 45 minutes of the season, the latest example of the gulf which has opened up between the blue and red halves of Manchester.

In the end, Manchester City came away from Old Trafford on Tuesday with a 3-1 victory but with hint of frustration that the score wasn't even bigger after a one-sided first leg of the English League Cup semifinals.

“Of course, Manchester United can come back," City manager Pep Guardiola said, looking ahead to the second leg at Etihad Stadium on Jan. 29. "They have the shirt which means history and pride.”

Guardiola will know, however, that this semifinal should be over.

City put on a first-half clinic, netting three goals from the 19th to the 38th minutes and looking like scoring every time the team went forward. Guardiola didn't play a recognized striker, instead flooding his midfield in order to dominate possession and spring forward in attack.

“We didn't deal with their system well enough,” Solskjaer said.

When the visitors went 3-0 up courtesy of an own-goal by Andreas Pereira, memories were revived of the 6-1 win served up on this ground by Roberto Mancini’s City in 2011 that was one signal of the shifting of the balance of soccer power in Manchester. It was the first time since 1997 that United conceded three first-half goals in a match at Old Trafford.

However, United managed to avoid conceding any more goals and a 70th-minute strike by Marcus Rashford gave Solskjaer’s team a glimmer of hope heading into the second leg. Both Solskjaer and Guardiola made reference post-match to United advancing from the Champions League round of 16 last season after losing 2-0 to Paris Saint-Germain at home in the first leg.

“We've shown before we have been down from a home tie and turned it around,” Solskjaer said. “PSG is the latest example and we have to believe that we can put on a performance.”

City has won the League Cup the last two seasons and is now unbeaten in 16 straight matches in the competition, dating back to a loss at United in the fourth round in October 2016.

Aston Villa takes on Leicester in the other semifinal on Wednesday.

Mindful of how United tore apart his City team on the counterattack in a Premier League game won by Solskjaer’s side at the Etihad last month, Guardiola chose not to field either of his two strikers - Sergio Aguero and Gabriel Jesus were on the bench - and overloaded the midfield.

“We win and we're a genius,” Guardiola said, "but if we don't win I know what will happen. We try to control the counterattacks because they're a wonderful team."

City’s midfielders picked their moments to charge forward, and did so with devastating effect.

Bernardo Silva was unchallenged as he advanced toward the edge of United’s penalty area and drove a fierce, curling shot into the top corner in the 17th minute, with goalkeeper David De Gea unable to get close.

The Portugal playmaker then wriggled into space in the of the field and threaded a perfectly weighted through ball to Riyad Mahrez, who ran onto the pass, rounded De Gea and slotted the ball into an empty net in the 33rd.

United was reeling and it got even worse six minutes later. Again its opened up as Kevin De Bruyne went round Phil Jones with ease and fired in a left-footed shot that was saved by De Gea, only for the ball to ricochet off the shin of Pereira and rebound into the net.

With Raheem Sterling wasting two glorious chances that were teed up for him from crosses from the right, City should have gone into halftime with an even bigger lead.

“You might say we were lucky to be only 3-0 down at half time,” Solskjaer said.

Mahrez struck the outside of the post early in the second half and also brought out a good save from the feet of De Gea, before United finally got in behind City’s to score a goal that could yet prove to be more than a consolation.

Mason Greenwood slipped a well-timed pass into the path of Rashford, who took a touch and finished low past City goalkeeper Claudio Bravo.

Away goals do not count double if the aggregate score is tied after two legs in the League Cup.

“Football is crazy, anything can happen," City defender Kyle Walker said. “But we're in a good position.”