VANCOUVER — Marc Bergevin isn't looking for any short-term solutions for the Montreal Canadiens to make the playoffs. "I will not mortgage the future of this team just hoping to make the playoffs," the Canadiens' general manager said Monday.
Dec 16, 2019 3:40 PM By: Canadian Press 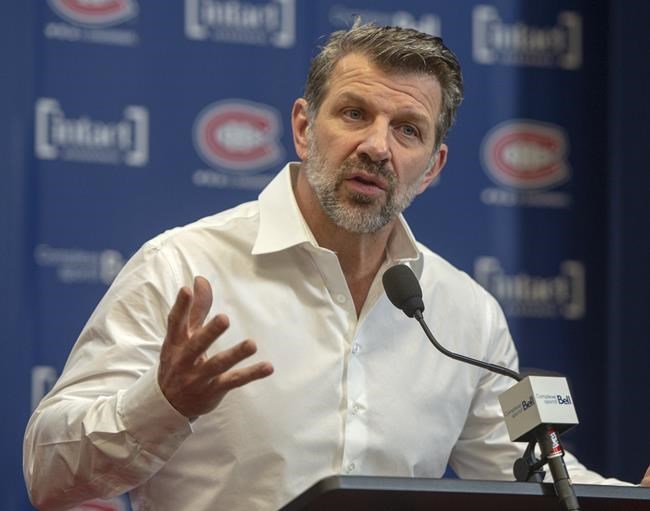 VANCOUVER — Marc Bergevin isn't looking for any short-term solutions for the Montreal Canadiens to make the playoffs.

The Canadiens are third in the Atlantic Conference with a 15-12-6 record. But heading into Monday night their 36 points leaves them tied with the Toronto Maple Leafs, who are 10th in the conference and out of the playoffs.

Montreal has missed the playoffs the last two years and three times in the last four years.

The Canadiens are 4-5-1 in the last 10 games heading into Tuesday night's matchup against the Vancouver Canucks at Rogers Arena.

Bergevin shrugged when asked if he feels any urgency to upgrade his roster with a trade.

He said general managers often talk about possible deals but "to upgrade you need to make your team better" and sometimes that doesn't happen "unless you want to pay an arm and a leg."

"You look around the league, there's teams that right now are not in the playoffs that were supposed to be Stanley Cup contenders and they haven't made any moves," said Bergevin.

"I don't believe that I could make a trade today or tomorrow to get assets that would make us a Stanley Cup team. There's not one player that you could say 'I'm going to bring him in and for sure you're in the playoffs.' The return you have to give to get those type of players, to me, it would be too much."

The Montreal roster is stocked with young forwards like Jesperi Kotkaniemi, Nick Suzuki and Ryan Peohling. That youth is balanced by veterans like defenceman Shea Weber and goaltender Carey Price.

"You can't just go with kids and you can't only go with older guys," said Bergevin. "Those two guys (Weber and Price) we chose to be the leaders moving forward. They are guys that we rely a lot on for now and for the long term."

The Canadiens are 8-8-3 at home and 7-4-3 on the road. Heading into Monday night Montreal was ranked eighth in the NHL for allowing 106 goals but was 15th in scoring with 103 goals. The Montreal power play is 14th in the league at 20 per cent and the penalty kill 27th at 76 per cent.

Bergevin would like to see the Canadiens improve their home record.

"We should be better at home," he said. "Are we more stressed at home, do we squeeze the stick too tight trying to be pretty? I don't know the reason why, but it needs to be better.

"Our PK needs to improve. Our PP has been pretty consistent all year, but our PK needs to be better. And for us to stay in the fight, to make the playoffs, we need to be more consistent."

The game against the Canucks opens a four-game western Canadian road trip with stops in Calgary, Edmonton and Winnipeg before Christmas.

"We are where I thought we'd be, fighting for a playoff spot," said Bergevin.

This report by The Canadian Press was first published Dec. 16, 2019.