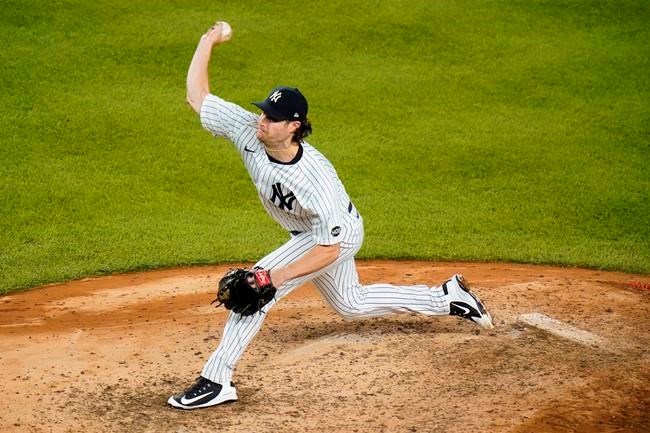 NEW YORK — Kyle Higashioka was as surprised as anyone.

“It's just kind of crazy how baseball works sometimes," the career .169 hitter said. “One minute, you can’t hit the ball to save your life, and then the next game you play and pop three over the fence.”

Luke Voit lofted a three-run drive for his major league-leading 19th homer and Clint Frazier added a solo shot as the Yankees won their seventh straight game following a 5-15 slide. New York moved 1 1/2 games ahead of Toronto for second place in the AL East, with the top two teams ensured spots in the expanded that begins in less than two weeks.

“The confidence is growing with every run we’re putting on the board,” Frazier said.

Gerrit Cole (6-3) had another overpowering start for New York, carrying a no-hitter into the sixth. The right-hander completed seven innings of three-hit ball, striking out eight and walking two for his 100th career victory. He also took a no-hitter into the fifth in his previous start — a seven-inning, two-hit shutout against Baltimore in the opener of a doubleheader Friday.

Aaron Judge was activated from the injured list but wasn’t much help, going hitless with three strikeouts. The two-time All-Star had been out since Aug. 26 after re-aggravating a strained right calf.

Higashioka had never topped three homers in a season but has four in the past six days while emerging as Cole's preferred batterymate. The last New York player with three homers in a game was teammate Gary Sánchez on April 7, 2019 at Baltimore.

The 30-year-old Higashioka hit a two-run homer in the third off Tanner Roark (2-2), a solo shot in the sixth against Jacob Waguespack and another two-run drive in the seventh off Hector Perez. He matched a career high with five RBIs, and his only out was a drive to the warning track in the fourth.

Higashioka was a seventh-round draft pick by New York in 2008, and only Brett Gardner has been with the organization longer. He debuted in the majors in 2017 but has never gotten regular at-bats, although he's been siphoning playing time recently as Sánchez struggles.

Higashioka has stuck around for so long because of his pitch framing, game calling and communication — but also because New York has always thought there was more in his bat than the numbers showed.

“There’s that power potential that’s in there,” manager Aaron Boone said. “And you saw it manifest itself tonight.”

New York is the first team in major league history to have their Nos. 1 and 9 hitters connect at least twice in the same game, according to STATS.

LeMahieu hit his major league-leading fifth leadoff homer and also had for a two-run shot in the fourth, his ninth of the season. LeMahieu has five career multihomer games, including two this month.

LeMahieu had three hits and lifted his average to .373 as he battles Chicago's Tim Anderson for the AL batting title.

Jonathan Loaisiga relieved Cole and pitched a scoreless eighth in his first appearance since recovering from an undisclosed illness. Nick Nelson allowed Joe Panik's solo homer in the ninth before finishing off the five-hitter.

“They had my number tonight," he said. "These first two games, they’ve had our number.”

Blue Jays: OF Teoscar Hernández (left oblique) was activated from the IL but didn't play. ... RHP Ken Giles was placed on the 10-day IL with a right flexor strain. ... RHPs Perez and Waguespack were called up from the alternate site. Perez made his major league debut. ... OF Derek Fisher was placed on the 10-day injured list with a right knee bruise. ... LHP Anthony Kay was optioned and added to the taxi squad.

Yankees: LHP James Paxton (left flexor tendon strain) was transferred to the 45-day injured list, ending his season. ... Torres (quad) was held out of the lineup for a second straight game with tightness that Boone said was minor. Boone said Torres was available as a late-game replacement and is expected to start Thursday. ... Stanton (left hamstring) was held out a day after returning from the injured list as part of New York's plan to ease him back into full-time duty. Boone expects Stanton to start Thursday.

Yankees RHP Masahiro Tanaka (2-2, 3.16 ERA) closes out the series against Toronto, which hadn't announced a starter.