In the Rings: Jones to play provincials before reuniting with famous team

A full-circle curling moment soon awaits Colleen Jones and the legendary foursome that won five national championships together over a six-year span. First up though is an attempt to get back to the Scotties Tournament of Hearts.
Jan 7, 2020 12:39 PM By: Canadian Press 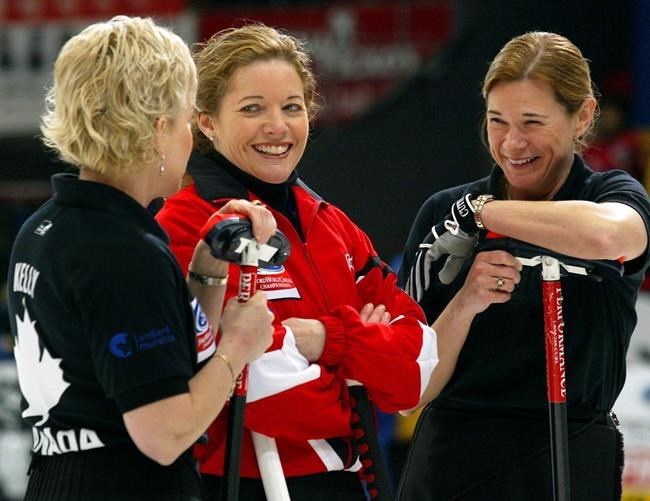 A full-circle curling moment soon awaits Colleen Jones and the legendary foursome that won five national championships together over a six-year span.

First up though is an attempt to get back to the Scotties Tournament of Hearts.

Jones, who turned 60 last month, throws third stones and calls the game for her rink, which includes longtime teammate Kim Kelly and the front end of Sheena Moore and Julia Colter. They'll be in the field at the Jan. 20-26 Nova Scotia championship at the Dartmouth Curling Club.

"We feel good, we know what we can do," Jones said. "It's just a matter of calling it up when we need to do it. We still have some skill."

After the provincial playdowns, Jones and Kelly will reunite with Mary-Anne Arsenault and Nancy Delahunt to prepare for the Feb. 6-11 senior women's provincials in Truro, N.S.

Jones, Kelly and Delahunt teamed with Mary Sue Radford to win a world senior women's crown in 2017. The return of Arsenault to the lineup reunites the team that won Scotties titles together in 1999 and from 2001-04.

"We've been waiting for her for a long time to turn 50," Jones said with a laugh. "She's finally the right age."

In addition to their national titles, the foursome won world championships in 2001 and 2004. The team split in 2006.

Before they begin the senior women's playdowns, Arsenault will be the competition. Her regular foursome is also in the provincial Scotties field along with teams skipped by Jones, Theresa Breen, Mary Mattatall and defending champion Jill Brothers.

The Nova Scotia champion will represent the province at the Feb. 14-23 Scotties in Moose Jaw, Sask.

"I think there's a lot of parity in Nova Scotia," Arsenault said. "There's a lot of talented players and of course everybody always gets up for provincials. I think we'll be right up there."

Jones has also been busy with mixed competitions this season. She has played mixed doubles with her son, Luke Saunders, and they also teamed up for the Canadian mixed team playdowns with Peter Burgess and his niece, Lindsey Burgess.

The busy calendar works for the longtime CBC News reporter, who was inducted into Canada's Sports Hall of Fame in 2016. Jones said the post-holiday period is always special as she loves ramping up for the championship portion of the schedule — especially with longtime teammates in tow.

"I just think the game is deep in our souls," she said. "It's so deep that you can't not play. It's a thrill to be out there. I think (it's) the same feeling that we had for all of those years when we'd go out to play and you'd get that little feeling of anxiety or butterflies.

"It's the most natural and awesome feeling you can have. It's a thrill to still chase it. That just has never let go. There's been a grasp that's just connected and it feels right to be playing."

Jones, from Halifax, was only 22 when she won her first national women's title in 1982. She last reached the Scotties in 2013 at Kingston, Ont., on a team with Arsenault, Kelly and Jenn Baxter. Delahunt served as a fifth that year.

Brothers, meanwhile, was 2-5 at the 2019 Scotties in Sydney, N.S., and did not reach the championship round. Chelsea Carey beat Rachel Homan in the final and will return this year as the Team Canada entry.

The men's national championship — the Tim Hortons Brier — is set for Feb. 28-March 8 in Kingston.

Veteran skip Brad Gushue said progress is being made on the creation of a players' association and he's hopeful it will be finalized by the end of the season.

"It's urgently needed," Gushue said. "Our voices are not being heard by all the associations. There's enough issues out there, both in the men's and women's game, that we do need that association as soon as possible to voice those concerns."

One long-standing issue on the domestic scene is sponsorship cresting. Many curlers have an issue with mandatory cresting rules at some competitions regardless of conflicts with team sponsors.

"I don't think that's a really fair position to put athletes in," Gushue said in a recent interview. "It makes it hard then to go out and get those sponsors."

New team names will be used at this week's Continental Cup in London, Ont., with Team Canada playing Team Europe in a four-day competition.

Team World defeated Team North America 34-26 last year in Las Vegas. American teams skipped by Jamie Sinclair and John Shuster were on the Team North America side while teams from Switzerland, Scotland and Sweden represented Team World, which used a team from Japan in 2018.

The Scotties Tournament of Hearts will return to Thunder Bay, Ont., next season for the first time in a quarter century.

The competition will be played Feb. 20-28, 2021 at the Fort Williams Gardens. Ontario's Marilyn Bodogh won the 1996 national title at the arena, which also hosted the 1960 Brier won by Saskatchewan’s Ernie Richardson.

In the Rings, a curling column, is published weekly.