TORONTO — Major League Soccer is moving ahead with small group training sessions, providing they are not in conflict with local health or government policies.
May 28, 2020 2:57 PM By: Canadian Press 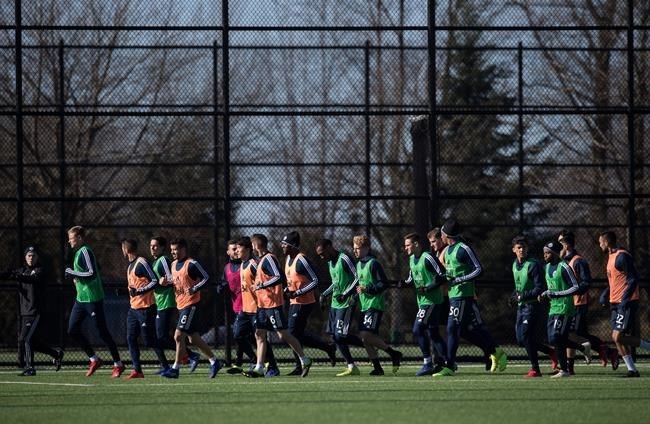 TORONTO — Major League Soccer is moving ahead with small group training sessions, providing they are not in conflict with local health or government policies.

The 26-team league, which suspended play on March 12 due to the global pandemic, allowed individual outdoor player workouts at team training centres as of May 6.

It has taken some clubs longer than others to get the necessary approval for the individual training, with Montreal, the New York Red Bulls, New York City FC and D.C. United not getting the green light until this week.

Chicago Fire FC and San Jose Earthquakes have yet to begin their individual workouts.

Vancouver Whitecaps sporting director Axel Schuster said work is underway to progress to the small group workouts, which like the individual sessions will be voluntary.

"We are encouraged by this next step from the league and are well prepared for it," Schuster said in a statement. "Safety will always be our top priority. Throughout this pandemic we have remained in constant communication with our local and provincial health authorities, as well as the league.

"We have proactively worked with the Office of the Provincial Health Officer and prepared safe and secure protocols for our next steps. We will submit our plan to the league today with the goal of starting our small group training sessions early next week."

Said Toronto FC: "We are working on our plan internally and in co-ordination with the league, Toronto Public Health and the province to ensure that any potential changes are meeting the health and safety regulations set in place, which is our highest priority."

The Montreal Impact said they had sent their plan to local authorities for approval.

Gatherings of more than five people, with the exception of those who live together, remain illegal in Ontario because of COVID-19. The limit is 10 in Quebec, representing a maximum of three households. The limit in B.C. is 50.

The league is reportedly looking at resuming play later this summer in one hub, possibly the Orlando area.

The protocol calls for a maximum of six players in a group, with physical distancing rules coming into play.

Clubs can divide each full field into two halves, assigning a group of players to each segment. Each half-field can be split up into six zones, spaced at least 10 feet (three metres) apart. Only one player may be in a zone at any given time.

Players can pass the ball and shoot on goal within a group, providing they maintain physical distancing.

Other rules include barring goalkeepers from spitting on their gloves, which must be sanitized after each training.

The NWSL has already permitted small group training, pending local approval, with plans to allow full team training as of Saturday if certain requirements are met.

The nine-team women's league is preparing for a 25-game tournament set to start June 27 in the Salt Lake City area.