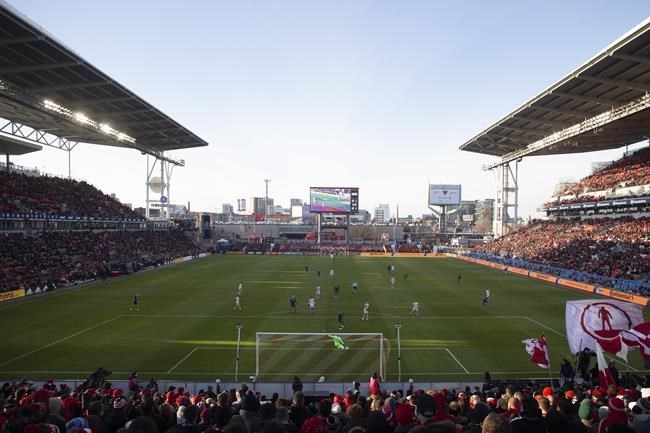 It appears players in "multiple markets" also stayed home amidst reports they faced a threatened lockout by the league.

The training sessions are voluntary but players had been taking advantage of them, with Toronto, Atlanta, Inter Miami and Sporting Kansas City among those slated to progress from individual to small group training sessions Monday.

"Players made a CHOICE to focus their time and energy on an important decision which includes the threat of a lockout instead of volunteering to attend on-field training for a tournament we already agreed to attend," tweeted Minnesota United midfielder Ethan Finlay, a member of the MLSPA's executive board. "Refuse is not the word I would use."

With the season on hold since March 12 due to the pandemic, the two sides have been bargaining about concessions and pay.

On Sunday night, the Players Association announced its membership had approved a package for the 2020 season included player salary reductions and additional concessions. It did not provide specifics although the proposal included participating in a summer tournament in Orlando.

"While a difficult vote in incredibly challenging times, it was taken collectively to ensure that players can return to competition as soon as they are safely able to do so," the PA said in a statement. "The package has been formally submitted to the league for a decision by the owners."

Complicating matters is the fact that while the league and PA agreed on a new collectively bargaining agreement in February, it has yet to be ratified.

The players' proposal included adding a year to the CBA.

The labour negotiations come against a backdrop of unrest in the U.S. in the wake of the death of George Floyd.

"I can't sleep some of these nights!," tweeted Mark-Anthony Kaye, a Canadian international who plays for Los Angeles FC. "My mind just races and goes on and on at the amount of possible scenarios in where I lose my life or I'm harmed by a police officer who took an oath to protect us. The police force has lost its credibility, the CHANGE needs to start internally!"

The league released a statement Monday saying the "entire Major League Soccer family is deeply saddened and horrified by the senseless murder of George Floyd.

"We stand united with the black community throughout our country and share in the pain, anger and frustration. We hear you. We see you. We support you. We are committed to use our voices and the platform of our league, our clubs and our players to continue to champion equality and social justice."

Prior to the league release, Toronto defender Justin Morrow wondered what was taking so long.

"How long must we wait to hear from you regarding what's going on across the country?" he tweeted. "Can't you see that your players are speaking up and it matters to them? Your silence is deafening. Please support us."

The MLSPA issued its statement Sunday.

"Like our players, we are deeply sickened by the continued inequality and violence around the country. We stand with all of those who have been subjected to unfair and unequal treatment because of the colour of their skin. We must commit as a society to end this horrible cycle."